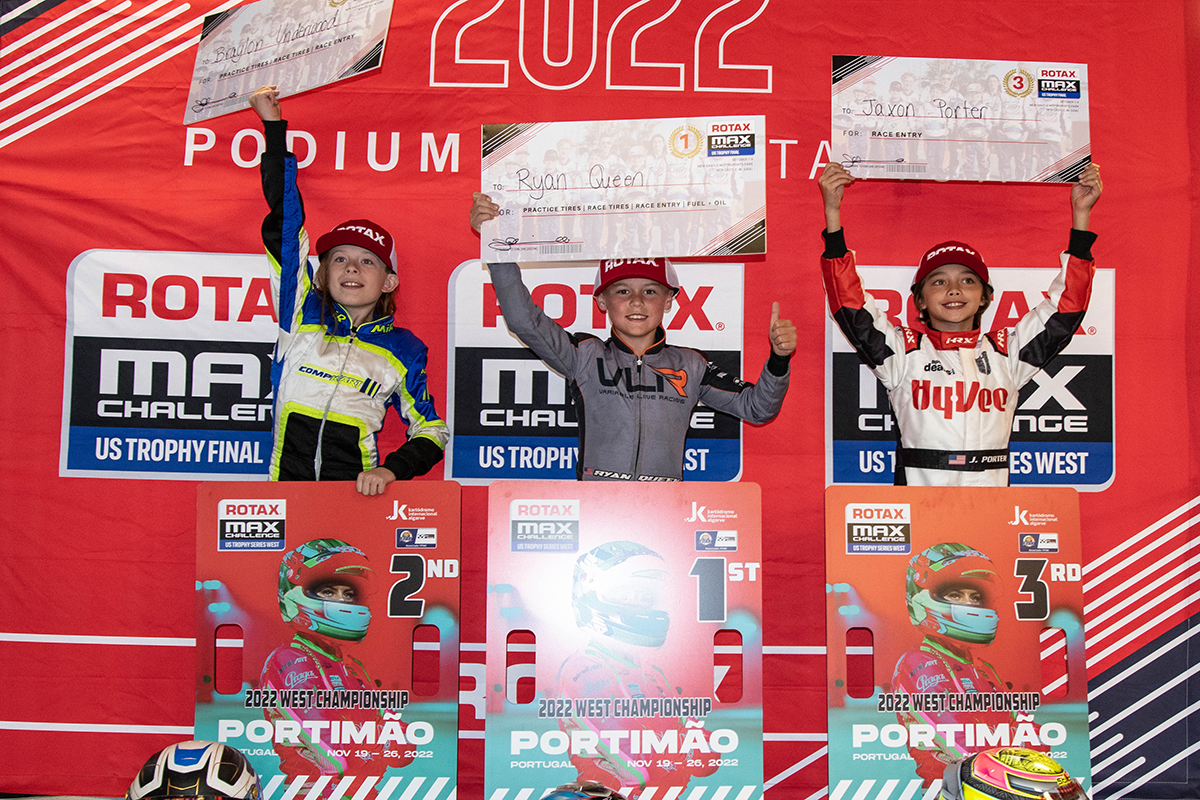 The 2022 Rotax Trophy West series concluded over Memorial Day weekend at Grand Junction Motorspeedway located in the high-desert of Colorado.  The fan favorite race facility hosted close and competitive racing as the weekend winners played out the racing action in mixed weather conditions with the weekend also crowning the Trophy West series champions.   The doubleheader event once again utilized different track configurations with counterclockwise being the direction for Saturday followed by clockwise direction for Sunday’s action

“It’s always great to compete in Grand Junction, with such a fast and technical track alongside arguably the best backdrop in North America it just adds a little extra to the weekend. Additionally, we crowned our west champions who will later hone in at the Trophy Final event in New Castle, In (Oct 7-9) at their chance to earn a ticket to the RMC Grand Finals, the ‘Road to Portimao’ has just begun!”  — Justin Stefani

First on track for the weekend was the Jr. Max category with close competition as the top four were separated by a mere tenth plus of a second on both days.  Saturday’s action was tight in the beginning with O’Clair and Eversman battling with O’Clair eventually claiming the heat race win.  The final saw much of the same with Nixx Eggleston showing speed in the long run finishing on the heels of eventually winner, O’Clair with Eversman in third place.  Sunday looked to be a carbon copy of Saturday aside from the looming weather.  Qualifying went to Archer Eversman with a solid lap time, as the heat race matured, O’Clair took advantage and eventually won with Eversman in second and young Spencer Smith taking third place.  The final had an early battle between O’Clair and Smith until lap four when O’Clair had to retire with mechanical allowing Eversman to take a commanding victory followed by a strong run from Eggleston in second while Alexander Jacoby crossed the line in third place.

Saturday started out with local pilot Macy Williams taking pole position followed closely by Ethan Ho and Micha Hendricks.  The heat races and final on Saturday were action packed in the top spots with Williams, Ho and Hendricks battling fiercely with Ethan Ho eventually taking the win followed closely by David Williams and Macy Williams.  Sunday proved an even closer field of competitors with weather imminent, Macy Williams took pole position again with Micha Hendricks and Griffin Dowler taking notable steps forward.  Hendricks secured an impressive pre-final victory and with wet tires being called for the final it quickly turned to anyone’s race.  In the final with all drivers on MoJo W5 wet tires, Griffin Dowler put on a solid display of speed and consistency taking the victory with Noel Dowler in second followed by Ethan Ho.

A light field, but strong competition for the event was a three-way battle between Derek Wang, Christopher Mann, and Billy Cleavelin.  Wang was able to secure a perfect weekend with pole position, pre-final and final wins on both days, however it was not without a fight as Billy Cleavelin found speed on the weekend keeping Wang honest with Mann close in tow. Sunday’s final saw Cleavelin utilize slick tires on a wet track which proved to be the wrong choice allowing series regular Rene Bine to take the final step on the podium behind Mann and Wang.

Mini Max provided yet again close racing with times varying little between the top drivers.  On Saturday young Matteo Quinto took the heat race and final victories ahead of Kyle Drysdale and Gage Korn.  Sunday provided a close championship battle as Mason Duchesne put his name in the hat finishing second in the prefinal behind Quinto and ahead of Drysdale.  The final ending up being wet, thus giving Gage Korn what he needed to assert himself with a commanding victory ahead of local Jordyn Bell with Matteo Quinto rounding out the podium.

With several new competitors the Micro Max category it was fun to watch the constant progression of the entries throughout the weekend.  The battle at the front was between Jaxon Porter, Ryan Queen and Braylon Underwood. Porter was able to secure a perfect weekend with Queen taking second on Saturday and third on Sunday, while Underwood took third on Saturday and second on Sunday respectfully.