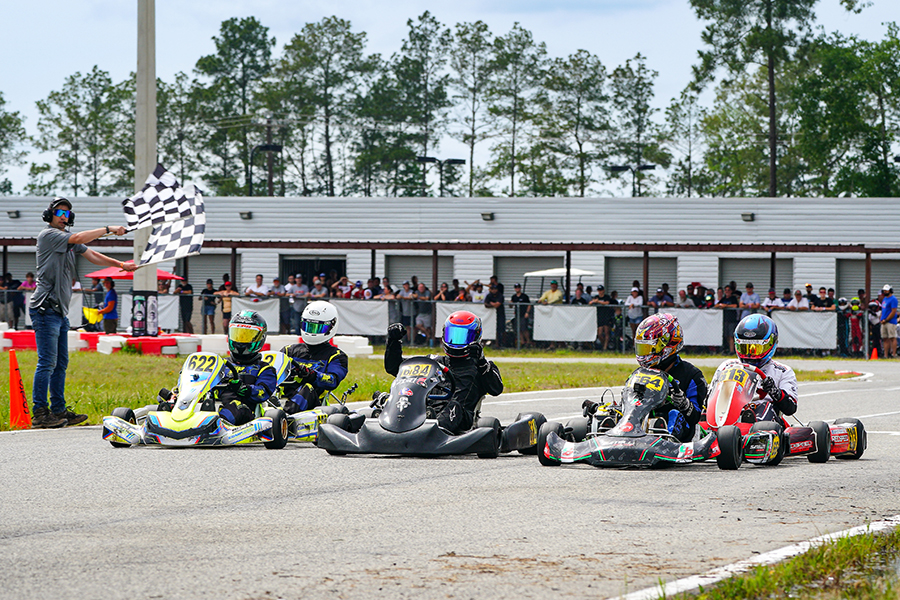 An exciting weekend of racing was conducted for the second stop of the 2022 Texas Sprint Racing Series presented by Auctionetx with the ‘Spring Round-Up’ event held on May 20-22 weekend at the Speedsportz Racing Park. Nearly 200 entries in the nine Superkarts! USA and International Kart Federation categories competed over the three days of action at the New Caney, Texas facility. After picture perfect two days to begin the event were followed by rain dampened the start of the final day for the second round of heat races before the track dried out and the event winners were decided.

The KA100 Senior class sponsored by Exertech surpassed the entry total from the opening round with 44 drivers competing at Speedsportz. Beginning the run toward the victory with fast time in qualifying was Aden Rudolph – setting a new track record with a 54.928-second lap. He came up just short in the first round of heat races with Josiah Tracy edging him at the line for the win in AvsB while Cole Kleck took the win in CvsD. Rudolph held the top spot through the AvsD heat race as Round One victor Alex Stanfield went to the front in BvsC. The class was brought back together for the main event with Stanfield jumping out to the lead. He led for two laps before Rudolph took over the top spot. Rudolph paced the field the remainder of the way, establishing a 2.6-second advantage for his first series victory in the category. Noah Baker advanced four spots to win the battle for second ahead of Kleck with Stanfield ending up fourth with fast lap of the race. Drew Chappell completed the top-five, gaining seven spots over the 19-lap main event. 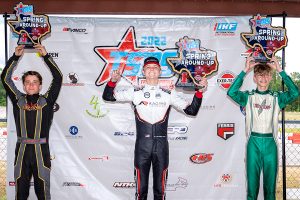 Aden Rudolph stood in the P1 position for the first time of his career in the KA100 Senior class (Photo: Studio52.us)

It was a two-driver fight all weekend long in the 4T Concrete Pumping KA100 Junior class, also improving its entry total to 30 drivers for Round Two. Cooper Shipman opened the weekend as the top qualifier, posting a 55.347-second lap to edge out defending series champion Helio Meza by 25 thousandths. Meza came away with the win in Heat #1 while Shipman went back to the front in Heat #2. The two went back and forth in the Final until lap 17 when a mechanical issue put Shipman on the sidelines. Meza, who took the lead on lap 12, was able to drive away to his first series victory of the year. Oscar Iliffe won the fight for second, advancing 14 spots along with Landon Skinner gaining the same amount to finish in the third spot. Ernesto Rivera drove to fourth ahead of Brayden Domingue.

One driver left Speedsportz with two victories on the weekend – Keelan Harvick. The driver from North Carolina grabbed his first win in the Mini Swift class sponsored by the Alan Rudolph Racing Academy. Harvick was fourth in qualifying as Gage Bailey set the fast lap in the time session. Bailey led all 10 laps of Heat #1 while Harvick advanced to second. Harvick was able to conquer the wet conditions for the win in Heat #2 and then lead 17 of the 18 laps toward his first series victory. Bailey was able to post fast lap of the race in a runner-up effort ahead of Tyrone Kemper Jr., who advanced five spots to third. Tyler Roberts led for one lap but fell to fourth by the checkered flag with Derek Wargo in fifth. 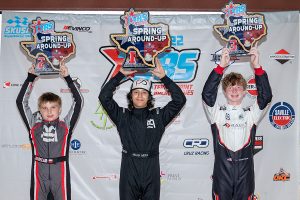 Harvick’s second victory on the weekend was in the 206 Cadet class sponsored by Ferris Mowers. Harvick, who finished second at Round One in NOLA, qualified seventh with Jaxon Young posting fast time in qualifying. The heat races saw great racing as Young was shuffled out of the lead in Heat #1 before returning to the front by the checkered flag. Harvick, who finished third, went on to win Heat #2 after another great 10-lap heat. Young led the opening three laps before Harvick took control. He would be challenged late by Derek Wargo, who led two laps until Harvick regained the top spot to lead the final two laps for the victory. A late charge by Tyrone Kemper Jr. had him came up 61 thousandths short at the line in a runner-up finish. Paxton Dyson joined them on the podium in third, gaining five spots. Davis Henry also improved five spots to finish fourth ahead of Brayden Westfall. Wargo ended up sixth with Young in the eighth position.

Arguably the best finish of the main events came in the 206 Senior class sponsored by Cruz Racing Development. Bryce Frank, making his 2022 series debut, opened with fast time in qualifying and winning the first heat race by 13 thousandths ahead of former series champion Ethan Wolfe. It was Wolfe that came away winning in Heat #2 with a host of others in the mix. Wolfe led for the opening 16 laps of the Final with Caiden Wolfe joining him at the front. On the final circuit, they along with Braxden Tregre began fighting for the top position. This allowed the second group to close in, making it five drivers fighting for the lead. Through the final corners, Kelvin Xing – who started eighth – was able to make it around the outside of all the drivers fighting for the lead to slip past by the time they reached the finish line, winning by 39 thousandths of a second over Tregre. Frank was able to move into third with Caiden and Ethan completing the top-five. 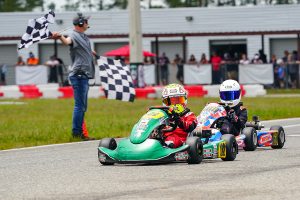 Keelan Harvick won twice on the weekend, including a series first in the Mini Swift class (Photo: Studio52.us)

It was a second straight victory for Ragan Saville in the 206 Junior class sponsored by Saville Electric. The Round One winner found himself fourth in the timed qualifying session as Sawyer Roussel earned the top spot of the time sheets, edging out Jenson Harrell by 21 thousandths. Saville powered through to score the win by beating Roussel to the line in Heat #1. Roussel struck back with a wire-to-wire win in Heat #2 as Saville recovered from early issues to finish second. The two were joined by Preston Piecko at the front in the Final. All three led at a time during the 17-lap race. At the white flag, Piecko was leading ahead of Roussel. On the final circuit, Saville was able to move from third to first to secure the victory. Piecko was second with Roussel in third. Jacob Pollack gained six spots to fourth as Alfred Alvarez del Castillo completed the top-five.

The KA100 Master class sponsored by Kart Racing Solutions welcomed its first different winner since the 2020 season. Defending champion Miguel Mier won each round in 2021 and opened this season with the victory in Round One. The talent pool continues to increase, welcoming 20 drivers at Speedsportz. Martin Stone was able to record the fast time in qualifying. Third-place qualifier Robby Mott – the runner-up at NOLA – jumped up to the front to win in Heat #1. Stone led early in Heat #2 before Mott was able to score the win with Mier sliding into second. From the pole position, Mott was able to lead all 19 laps for his first victory at the series. Mier drove to second with Stone joining them on the podium in third. James Lundburg was fourth with Morgan Lebaron in fifth. 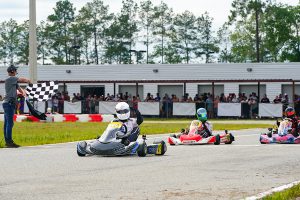 Ragan Saville was able to repeat victory in the 206 Junior class (Photo: Studio52.us)

Another new winner was welcomed in the Micro Swift division sponsored by Houston Freightliner / Western Star. Aston Wyatt opened the event hoping he would be the next winner of the category with fast time in qualifying, edging out Round One winner Paxton Dyson by 33 thousandths. Wyatt slipped to third in the opening heat race as Dyson took the win. The damp track helped Royce Vega improve from fourth to first in Heat #2 to help put him alongside Dyson on the front row for the main event. Four drivers began the race fighting for the top spot until Wyatt was shuffled down the order. That allowed Sawyer Chambers to take the lead before he was challenge by Dyson. When the checkered flag was waved and penalties were assessed, Vega was declared the winner for his first series victory. Chandler was classified second with Dyson in third and Tanner Barsch in fourth ahead of Chambers.

Dutch Westbrook added a second victory on the season in the Honda Kid Karts class sponsored by Helix Electric. It was not a complete sweep as he did at Round One in NOLA with Brody Stoffle setting fast time in qualifying. Westbrook was third in the timed session but managed to grab the Heat #1 win. An issue for Westbrook in Heat #2 on lap three put him on the sidelines, allowing Kimo Ahmad to secure the race win. Westbrook ended up starting third in the Final and grabbed the lead on the opening circuit, pacing the field the entire 14-lap run for the victory. Ahmad and Stoffle earned their first series podium finish with second and third place finishes. Theodore Mitchell and Brennan Barsch completed the top-five. 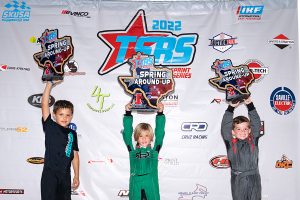 The midway point on the 2022 season for the Texas Sprint Racing Series presented by Auctionetx is the Summer Shootout, scheduled for June 24-26 at the North Texas Kartway facility in Denton, Texas. Be sure to follow TSRS on Facebook and Instagram, and get details on everything at www.texassprintseries.com. Those interested in supporting the 2022 program with sponsorship, please contact them via email at info@texassprintseries.com.