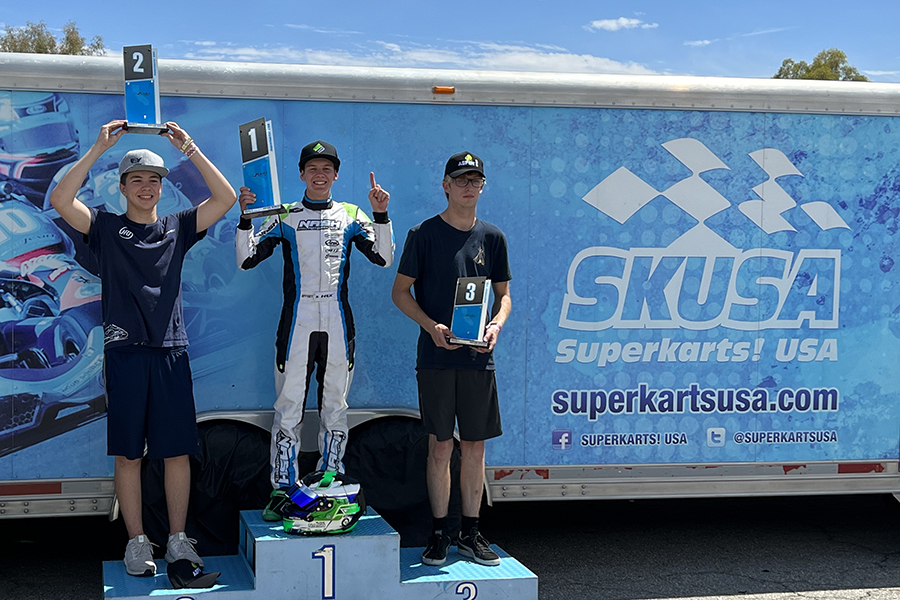 The California ProKart Challenge completed the second round of the 2022 season over the May 14-15 weekend at the Buttonwillow Raceway Park. It was the second straight event at the central California facility, with the opening event contested there in April. This time it would be in the clockwise direction around the 7/10-mile circuit. Another chunk of the $70,000 prize package for this season was awarded following the two days of action at Buttonwillow – with all but two drivers earning their first wins of the series this year. 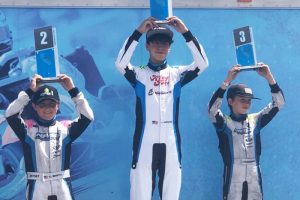 The Nash Motorsportz KA100 Junior class set the mark for the largest division on the weekend with 22 drivers. Qualifying was tight, with five drivers within one tenth of a second led by Charlie Smith posting a 51.792-lap. In the Prefinal, SuperNationals 24 top qualifier and 2021 California PKC series champion Jesus Vasquez Jr. came through from sixth on the grid to lead the majority of the 12-lap race for the win ahead of Smith. In the 22-lap Final, the two were able to get away from the rest of the field – where Vasquez was at the point from the green flag to lap 13 until Smith had his turn. The top qualifier showed the way until the final lap, when Vasquez was able to secure the victory by 28 hundredths. Smith settled for second, while Jackson Glendenning was the hard charger of the race advancing 18 spots to the third step of the podium. Keagan Kaminski ended up fourth with Alexander Gonzalez finishing fifth.

The second round for the HRT Driver Development KA100 Senior division began the same way as Round One with championship leader Ethan Lampe setting fast time in qualifying, posting a 51.328-lap to secure the pole position for the Prefinal. Starting fifth was defending series champion Blake Nash, who advanced with fast laps of the race to the top spot in the Prefinal with a last lap pass on Lampe. The Final began with Lampe leading the opening two laps before Nash returned to the point. From there, Nash led the remainder of the race to claim his first victory of the season. Lampe recorded his second runner-up finish in a row ahead of Aiden Kempf. Jacob Hoover was one spot short of the podium in fourth with Rehn Palmquist in the fifth spot. 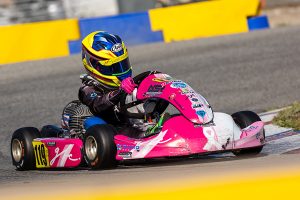 It was another competitive weekend in the Empire Karts Mini Swift category with multiple drivers in contention. Leading the way to open the weekend was California PKC 2022 newcomer Turner Brown by setting fast time (54.390) in qualifying. Brown dropped down to third in the Prefinal, however, as Johnie Stamps moved up from his third-place start to grab the win ahead of Round One winner Michael McGaughy. The Final was Stamps and McGaughy going back and forth for nearly all 20 laps. At the same time, Nico Sarphati was climbing up from seventh to third. On the final circuit, McGaughy was attempting a pass in turn one when he overdrove into turn two and ended up in the dirt. That kept him from finishing the race and allowed Sarphati to slip past, winning the drag race to the checkered flag by 49 thousandths ahead of Stamps. Keegan Ellsworth grabbed his first career podium in the category with a third-place result. Sebastian Hauser won the fight for fourth ahead of Nixon Ellsworth.

Two drivers were able to back up their wins in Round One to continue their 2022 California PKC championship run. Brian Phillipsen swept the weekend for a second straight time in the Mike Manning Karting KA100 Master class. Phillipsen cleared the field by four tenths in qualifying but was challenged by Ronnie Swaim in the Prefinal before taking the win. Swaim stepped up the challenge even more in the 22-lap Final, taking the lead on lap four and setting the pace until the final circuit. Phillipsen was then able to work past him on the last lap, winning the race to the line by 11 thousandths of a second. Michel Manning joined them on the podium in third, with Ron Schoonover fourth and Scott Grundfor fifth. Brett Revetta also earned maximum points for a second straight event, running uncontested in the Doran Motorsports Group X30 Senior division. Robert Switzler was able to dominate the weekend in the Leading Edge Motorsports X30 Master class finishing ahead of Scott Nealon. 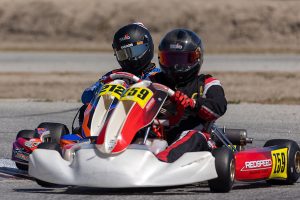 The other driver to sweep the weekend at Round Two was Troy Ferguson in the P1 Racing Engines Micro Swift class. Ferguson made his 2022 series debut on the weekend, edging out Round One winner Matthew Cagle by 93 thousandths in qualifying. Leading every lap of the Prefinal and Final, Ferguson completed the weekend sweep with a 4.7-second advantage for the victory. Cagle finished second with Braydon Wagner on the podium in third. Julian Sanchez drove to fourth with Bristol Borneman completing the top-five.

Jacob Gulick was able claim his first victory in the Factory Karts Pro Shifter class. Multi-time champion and Round One winner Billy Musgrave began Round Two as the top qualifier, clearing the field by over half a second. He then led all 12 laps of the Prefinal to finish over three seconds ahead of Gulick. The start of the Final, however, was very eventful. Two-time SKUSA SuperNationals winner Gary Carlton subbed for Kyle Wick, who had to drop out due to a rib injury. Carlton jumped the start of the main event and was out to the lead. At the same time, Musgrave had an issue and fell to the back of the field. Carlton led the race for two laps before Gulick grabbed the top spot. Carlton retook the lead on lap nine with Gulick slotting in behind the veteran. Carlton showed better pace and took the provisional victory until he was assessed a three-second penalty for the jump start. This handed the victory to Gulick, his first career win in the category. Carlton was classified second with Musgrave able to drive back up to third ahead of Conner Wick and Charlotte Cheung. Michael Guasch raced on track with the Pro Shifters, running uncontested on the weekend in the Master Shifter class. 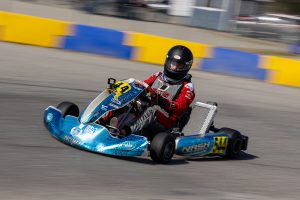 In just over five weeks, the California ProKart Challenge returns to action with the lone double-header weekend of the 2022 season. On June 24-26, the series heads to the popular CalSpeed Karting facility in Fontana, California. Racers will be able to enjoy a full day of practice on Friday, as Saturday will be for Round Three action and Sunday will host the Round Four program.