Return to Buttonwillow for Second Event of 2022 California ProKart Challenge

Reverse direction for Round Two of Superkarts! USA regional program in Buttonwillow 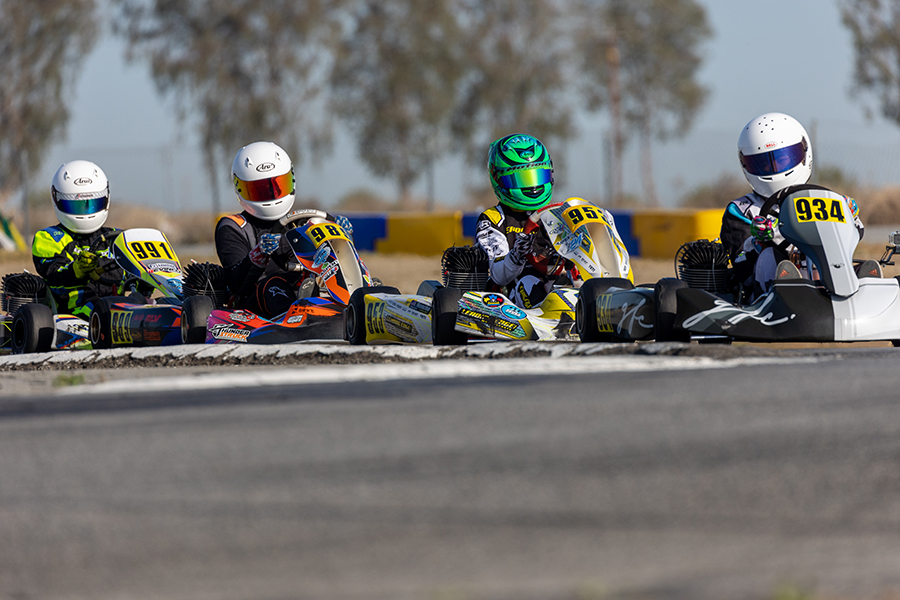 California ProKart Challenge returns to the Buttonwillow Raceway Park for Round Two of the 2022 season on May 14-15 (Photo: Spencer Russell - photosbysmr)

The racing season is underway for the California ProKart Challenge with a quick turnaround to host the second event of the 2022 season. On the May 14-15 weekend, the Superkarts! USA regional series returns to the Buttonwillow Raceway Park, site of the opening round last month. The Buttonwillow, California facility will welcome back the racers, this time taking to the 7/10-mile circuit in the clockwise direction. Portions of the $70,000 prize package for the season were handed out last month at the opener, with more to be presented at the popular podium ceremony following the Round Two action as drivers push forward in their championship chases.

Frankie Mossman came away with the Round One victory in the HRT Driver Development KA100 Senior division, but it is Ethan Lampe that leads the championship after one race. Lampe was top qualifier and won the Prefinal, only to finish second to Mossman. Add in the fast lap bonus and Lampe holds a 20-point advantage going into Round Two over Mossman. Third-place finisher Jackson Menchu is third, 60 points out of first. It was a near perfect score for William Rasmussen in the Nash Motorsportz KA100 Junior class. Sweeping the action, he only missed out on the fast lap bonus to leave Round One with a 40-point gap over fast time driver and runner-up Alex Mercado – with third-place finisher Keagan Kaminski sitting third, back by only 10 points more. It was a perfect score for Brian Phillipsen in Round One of the Mike Manning Karting KA100 Master class. Phillipsen holds a 50-point lead over Tim Meyer, with Ronnie Swaim in third going into the second event.

A first victory for Michael McGaughy in the Empire Karts Mini Swift category puts him at the top of the early championship chase. Runner-up Johnie Stamps is only 10 points behind, with top qualifier and third-place finisher Nixon Ellsworth just 20 points out of first. Matthew Cagle was able to put in a perfect round of racing in the P1 Racing Engines Micro Swift class. Julian Sanchez and Citizen Carbol are the top contenders after the opening event.

Another win was added to the career total in the Factory Karts Pro Shifter class by Billy Musgrave. The multi-time series champion was able to score maximum points at Round One to begin as the point leader once again. Luca Bortone and Ansel Baldovin sit second and third behind Musgrave. Ricardo Arruda is the point leader in the Leading Edge Motorsports X30 Master class, finishing second in the main event for Round One after setting fast time in qualifying and winning the Prefinal. Tim Meyer came away from the feature race with the victory, however, and trails Arruda by just 10 points – with Robert Switzler sitting third. Brett Revetta went unchallenged in the Doran Motorsports Group X30 Senior division at the opening round. Drivers with Stock Moto karts are welcome to Round Two with the Shifter Senior 125, Shifter Master 125, and S5 Junior Stock Moto classes still on the docket.

The California ProKart Challenge championship format features a best 5 of 6 races toward the year-end standings, thus allowing those unable to attend the opening event in April to still enter the chase for the title. Race Pre-Entry remains open for the second event of the 2022 California ProKart Challenge until the online registration deadline of Tuesday, May 10 at 11:59pm PDT. As always, a 2022 SKUSA membership is mandatory to register and compete. Complete race and venue information, along with a tentative weekend schedule, can be found at the PKC Event Page. Pit Spots and Camping Reservations are also available thru the online skusa store.