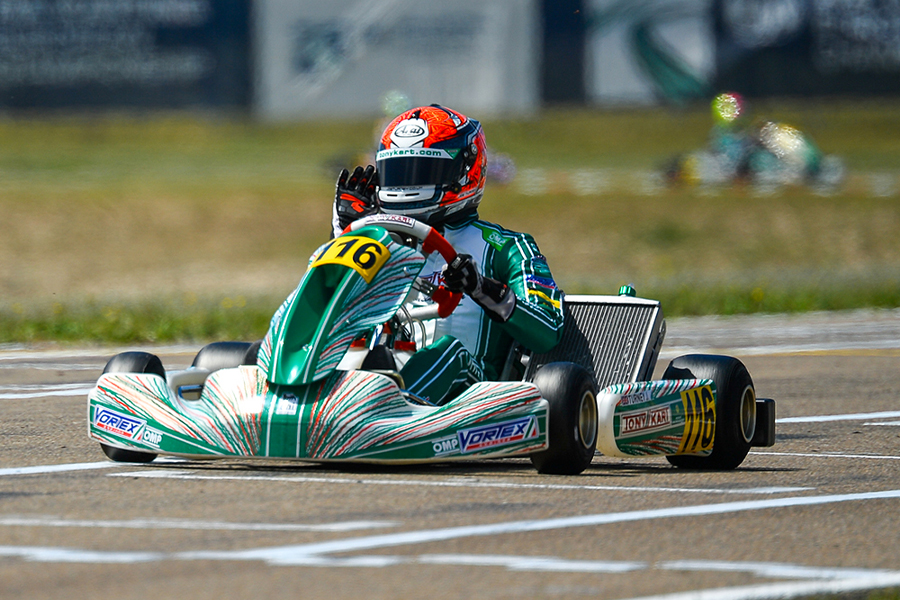 Joseph Turney scores his second consecutive success in the Round 2 of the FIA Karting European Championship and remains at the top of the OK category ranking. Double podium in OKJ for our “Racer 401 RR” with Enzo Tarnvanichkul and Arthur Dorison.

The second round of the FIA Karting European Championship for the OK-OKJ categories goes in the best way for the Tony Kart Racing Team. At the Circuito Internacional de Zuera, in Spain, our Tony Kart Racer 401 RR obtains the victory in the “Senior” class and extends its lead in the score classification, while the “Junior” final ends with a double podium. This is thanks to the proven competitiveness of the “Racer” and to the winning combination with the Vortex engines, the engine division of the OTK Kart Group, with the DST (OK) and DJT (OKJ) units.

Joseph Turney is immediately brilliant in the OK category. The British driver, already leader of the general ranking thanks to the first place obtained in the previous round in Portimao, leads the qualifying heats, with a perfect “score” of 5 victories out of 5 races run, and is uncatchable also in the super heat on Sunday morning, where he collects another success. No mistakes in the final: perfectly jumped from the pole position, our driver wisely manages the tires in the first part of the race, remaining in the lead for almost all the race and winning with more than 2 seconds of gap on the first chasers. Thanks to this second triumph, Turney gains precious points to extend his lead in the championship. Tuukka Taponen was also among the protagonists of the weekend in Zuera. The reigning world champion gains 4 victories in the qualifying heats and starts from the front row in the final, next to his teammate Turney. Unfortunately, the start from the outside line penalizes the Finnish driver, who ends the race close to the Top 5. James Egozi, in his first season among the “Seniors”, sets the best time in the qualifying thus confirming his speed in the qualifying heats with 2 victories. However, a collision stops his way in the super heat, preventing him from expressing his full potential in the final.

Oscar Wurz performs a remarkable comeback in the final race of the weekend, gaining a total of 10 positions compared to the start. The Austrian driver finishes behind the expert Juho Valtanen, twice on the podium in the qualifying heats, and just ahead of Keanu Al Azhari. Not a good weekend for Luigi Coluccio: the bad luck does not allow him to have access to the final, while Liu Ruiqi and Kuba Rajski perform well both in the qualifying heats and in the super heats.

In OKJ class, the French Arthur Dorison is one of the favourites for the victory with the first place in group 3. He then takes 4 victories in the qualifying heats and the first position in the intermediate ranking. In the final, the French driver starts in an intense but fair duel with his fast teammate Enzo Tarnvanichkul, who also wins the eliminatory heats. Tarnvanichkul, in second place, and Dorison, in third, then arrive on parade at the finish line. Jimmy Helias is among the best climbers in Sunday’s final, with the French driver gains 13 places in the standings. On the starting grid of the final, we also find Jan Przyrowski and Alp Hasan Aksoy, while Maria Germano Neto gathers a lot of experience in view of the next European and international races.

Our Tony Kart Racing Team moves from Spain to Belgium. As a matter of fact, in two weeks (May 12th – 15th) the first FIA Karting European Championship reserved to KZ and KZ2 classes will be staged at the Karting Genk track