First victories of the season earned at the Superkarts! USA regional program 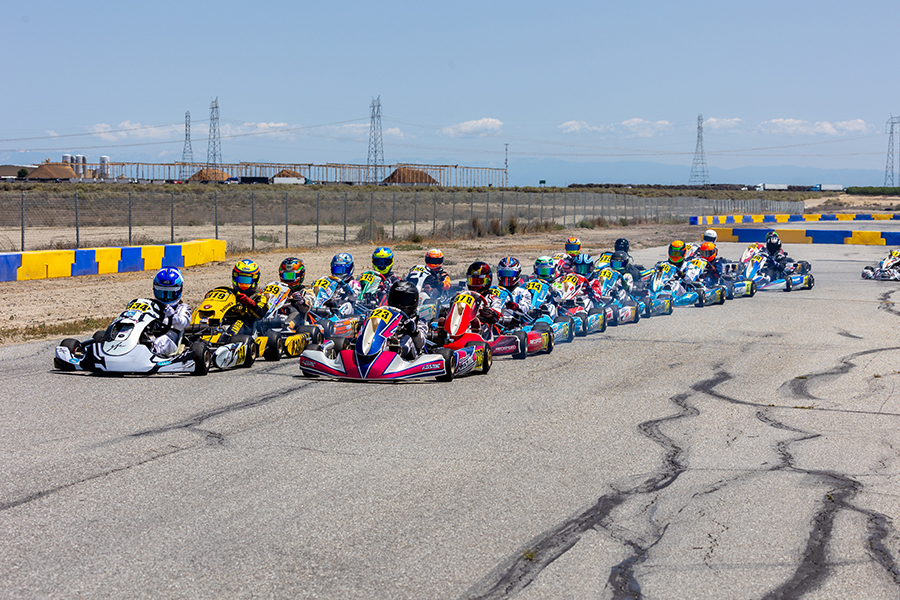 The 2022 season for the California ProKart Challenge program began over the April 23-24 weekend at the Buttonwillow Raceway Park. Round 1 for the Superkarts! USA regional series featured some new faces and picture-perfect weather at the Buttonwillow, California facility. Practice and qualifying took place on Saturday, with the Prefinal and Final races conducted on Sunday. Karters were able to begin the run toward the year-end championship and take home a portion of the $70,000 prize package that will be handed out over the course of the season. The popular podium ceremony and raffles concluded the opening round with even more product and prizes doled out to the competitors on the weekend. 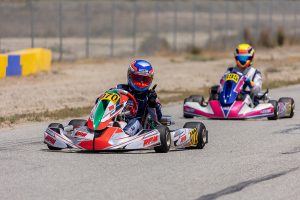 The largest category of the event was the HRT Driver Development KA100 Senior division, featuring 25 drivers. Ethan Lampe led the way in qualifying, posting a 51.130-lap to secure the fast time by 82 thousandths ahead of Frankie Mossman. Lampe led all 12 laps of the Prefinal as Aiden Kempf climbed up four spots to second ahead of Mossman. Kempf jumped out to the lead in the 22-lap Final, but on lap 12, an issue took him out of the race giving Mossman the lead. From there, Frankie led the remainder of the race to drive away to victory, winning by four tenths ahead of Lampe. Jackson Menchu moved up two spots to stand on the podium in third. Luis Perez was fourth, with Hunter Kelly placing fifth.

It was a close match in drivers participating in the Nash Motorsportz KA100 Junior class, with 22 competing for the opening round victory. The two days of racing was a near perfect performance by Junior rookie William Rasmussen. A 51.586-lap in qualifying secured Rasmussen fast time in the session before leading all 12 laps of the Prefinal. Keagan Kaminski finished second and jumped out to the lead to begin the 22-lap Final. Rasmussen retook the top spot on lap eight and led the remainder of the way for his first victory in the category. Alex Mercado posted the fast lap of the race, slipping by Kaminski for the second step on the podium. Preston Lambert was fourth and Caden Chrisman gained five spots to finish fifth. 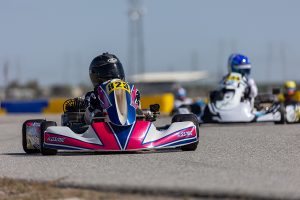 A total of four drivers swept the Round 1 action in their respective categories. Brian Phillipsen was one of them, earning the perfect score in the Mike Manning Karting KA100 Master class. Phillipsen posted a lap of 52.643 in qualifying for the top spot. It was not a completely perfect weekend, as Tim Meyer put on the pressure. Meyer led a few laps in the Prefinal before Phillipsen returned to the lead and the win. The fight continued in the 22-lap Final, with Phillipsen leading the first five laps before Meyer grabbed the lead. He was at the front until two laps to go when Phillipsen slipped past for the position. Phillipsen – a two-time winner in 2021 – claimed his first of the new season by two-seconds ahead of Meyer. Ronnie Swaim joined them on the podium in third, with Ron Schoonover and Michel Manning completing the top-five.

Matthew Cagle matched that perfect score of his own with his first career California PKC victory in the P1 Racing Engines Micro Swift class. Cagle, who finished fourth in the 2021 championship standings with a best finish of second at the season opener, swept the action at Buttonwillow. Cagle cleared the field in qualifying with a 55.376-lap, the only driver to crack below the 56-second mark. Cagle then went on to lead wire-to-wire in both the Prefinal and Final, winning by 15 seconds after 20 laps. Julian Sanchez was runner-up, with Citizen Carbol in third. Bristol Borneman and Miles Boertje completed the top-five. 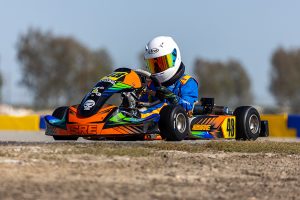 Multi-time California ProKart Challenge champion Billy Musgrave added to his win total in the Factory Karts Pro Shifter class. Musgrave was the lone driver in the class to dip below the 48-second mark in qualifying, laying down a 47.490 lap. His only error on the weekend was the holeshot in the Prefinal, as Luca Bortone got the jump on Musgrave and led the opening two laps. By lap three, however, Musgrave was back to the point, taking the win. The Final was wire-to-wire for Musgrave, earning the victory by 21 seconds. Bortone was runner-up, with Ansel Baldovin third and Liam Jones fourth. Brett Revetta was the fourth driver to sweep the weekend, running uncontested in the Doran Motorsports Group X30 Senior division.

A solid field of 13 drivers fought for the first victory of the season in the Empire Karts Mini Swift category. Nixon Ellsworth graduated from Micro for 2022, opening up his season with the pole position in qualifying, edging out Johnie Stamps by a mere 78 thousandths. Then, Michael McGaughy put his name into the contenders column, jumping out to the lead in the Prefinal. He led all but the final circuit, with Stamps slipping past for the win. McGaughy would have the final word, taking over the top spot of the Final on lap two and leading the remainder of the 20-lap race for his first California PKC victory. Stamps recorded his best series finish with a runner-up performance while Ellsworth joined them on the podium in third, recording the fast lap of the race. McLaren Carroll won the battle for fourth over Turner Brown. 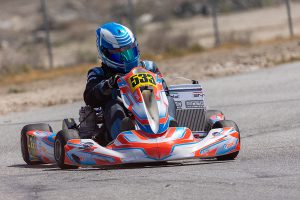 The Leading Edge Motorsports X30 Master class was a near sweep for Round One. Ricardo Arruda was the driver to beat at the beginning, posting a 50.391 lap in qualifying to clear the field. He then went wire-to-wire to win the Prefinal to retain the pole position for the Final. Former series winner Tim Meyer had other ideas in the main event, however. Jumping out to the lead on the opening circuit, Meyer led all 22 laps for the victory. Arruda settled for second, with Robert Switzler on the podium in third. Arman Cornell and Scott Nealon rounded out the top-five.

A short break between races for the California ProKart Challenge takes the series back to Buttonwillow Raceway Park on the May 14-15 weekend for Round 2 of the 2022 season – running the track layout in reverse. Race Pre-Entry is open now on the online registration page, with a deadline of Tuesday, May 10 at 11:59pm PDT. Pit Spots and Camping Reservations are also available thru the online skusa store.