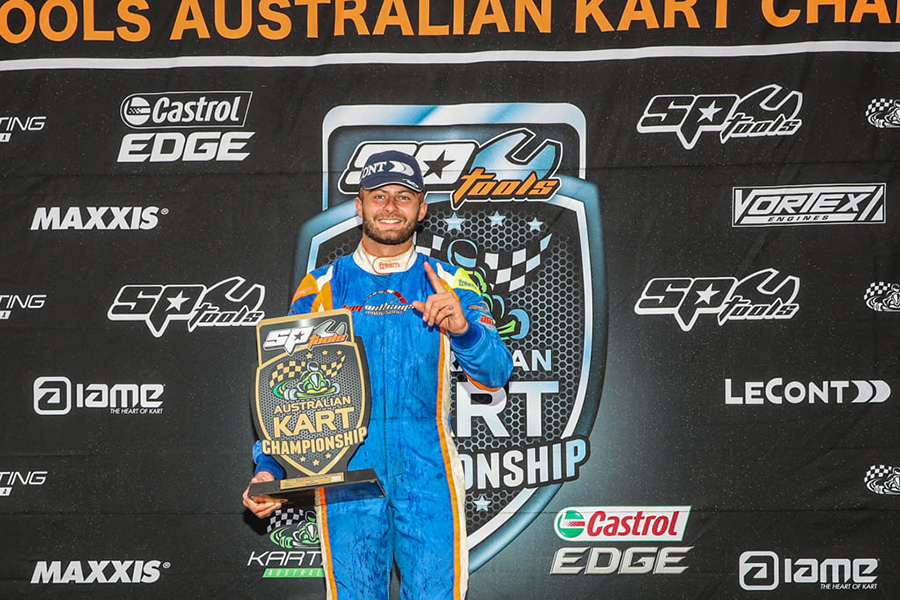 Cody Gillis has finally got the monkey off his back taking his maiden SP Tools Australian Kart Championship KZ2 final at Bolivar in South Australia on Sunday afternoon, extending his Championship lead.

The lights to flag win coupled as the first for the WP (Will Power) Kart in the category in Australia – a chassis that Gillis has developed with the TWM team in this market. 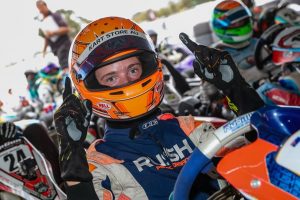 Finishing second in his return to the Championship after many years away was former runner-up Jake Klarich. He was one of 27 West Aussies to make the journey to Adelaide for round two.

Completing the podium was Team 18 Supercars co-driver, James Golding, while Josh Fife came from deep in the field to finish fourth.

The Dunlop Super2 Supercars regular spent much of the weekend fighting forward from the 31st and final position after being disqualified from timed qualifying.

The race had many ebbs and flows with a turn one incident claiming Championship frontrunners Lewis Francis and Costa Toparis, which handed the lead to Peter Bouzinelos. Several laps later, Bouzinelos was forced into the pits with a rear bar hanging from his kart. 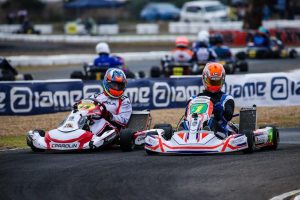 Max Walton assumed the lead with a charging Toby Dvorak behind him. Dvorak took the lead but couldn’t get away. Two laps from home, Walton mounted a final challenge and the two, while pushing on, collided and eliminated themselves from the race.

This granted Spinks his first Championship round win, being joined on the podium by another first timer in Daniel Quimby and relegating Rutkowski to third.

TaG 125 granted Brendan Nelson arguably the most hard fought win of his illustrious career. The defending Australian Champion was embroiled in a fight with Declan Matthews and Leigh Nicolaou, a technical issue claimed the former.

The result was an intensification of the fight between Nelson and Nicolaou. The pair traded blows for many laps – the result bringing a trio of Brayden Parkinson, Luke Bergens and Zach Heard into the fight.

Ultimately, the final was decided the way of Nelson over Nicolaou and Parkinson. 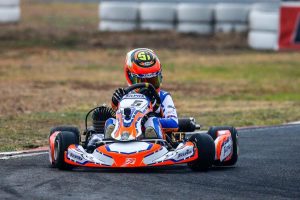 The despair of Declan Matthews led to delight for his brother Jace who took the win in X30. He got the best of a race long battle with Jaiden Pope, while Sydneysider Beau Pronesti dampened local spirits by passing South Aussie Jacob Dowson late in the race for the final podium position and then mounted a challenge for the win, but it was a mountain to high to climb.

Benito Montalbano’s Championship charge is back on track after winning KA3 Senior. He staved off Championship leader, Alex Ninovic to win the final by a second. Joel MacPherson fought his way forward to finish third.

Jai Brown, who was second on points coming into the weekend, ran wide at turn one and lost many positions, ultimately coming home in 13th.

Another first time winner came in KA4 Junior in Samuel March in what proved to be an insane race.

A light drizzle increased to a full on passing shower just prior to the field being released, greeting the whole grid on dry LeCont tyres.

Championship aspirant, Brodie Norris, succumbed to the conditions at turn one after the start. The spread out field resulted in a lottery to see who may end up on the podium. 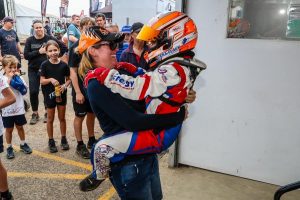 Ultimately, it was Victorian March who mastered the conditions and traffic the best to win by nearly four seconds.

Ben Munro and Ky Burke snuck through in a series of last lap passes to complete the podium.

Cadet 9 saw a grand slam weekend for Cruz Kelly. The Victorian Tony Kart driver took victory in every single race, however it wasn’t as dominant a performance as the results may indicate.

He had a number of battles throughout the weekend with several suitors to the title.

Finishing second was Championship leader coming into the weekend, Jackson Brasher and Queenslander Blake Haigh completed the podium in what was a hard fought final.

Reigning Cadet 9 Champion, Sebastian Eskandari-Marandi’s march towards a Cadet 12 Championship in consecutive years continued as he came from the second row of the grid to take a 3.9 second win.

Completing the podium was Lana Flack, who had a break out weekend.

One of a record 19 female competitors entered in the event, Flack won two heats and got through to the podium late in the 20 lap final.

Thus completes a round of the SP Tools Australian Kart Championship, presented by Castrol EDGE that will be remembered for a long, long time!

The Championship returns on June 4-6 when it will visit Victoria and the Eastern Lions Kart Club at Puckapunyal, just outside Seymour in Northern Victoria.

For the full results https://speedhive.mylaps.com/Events/1966486