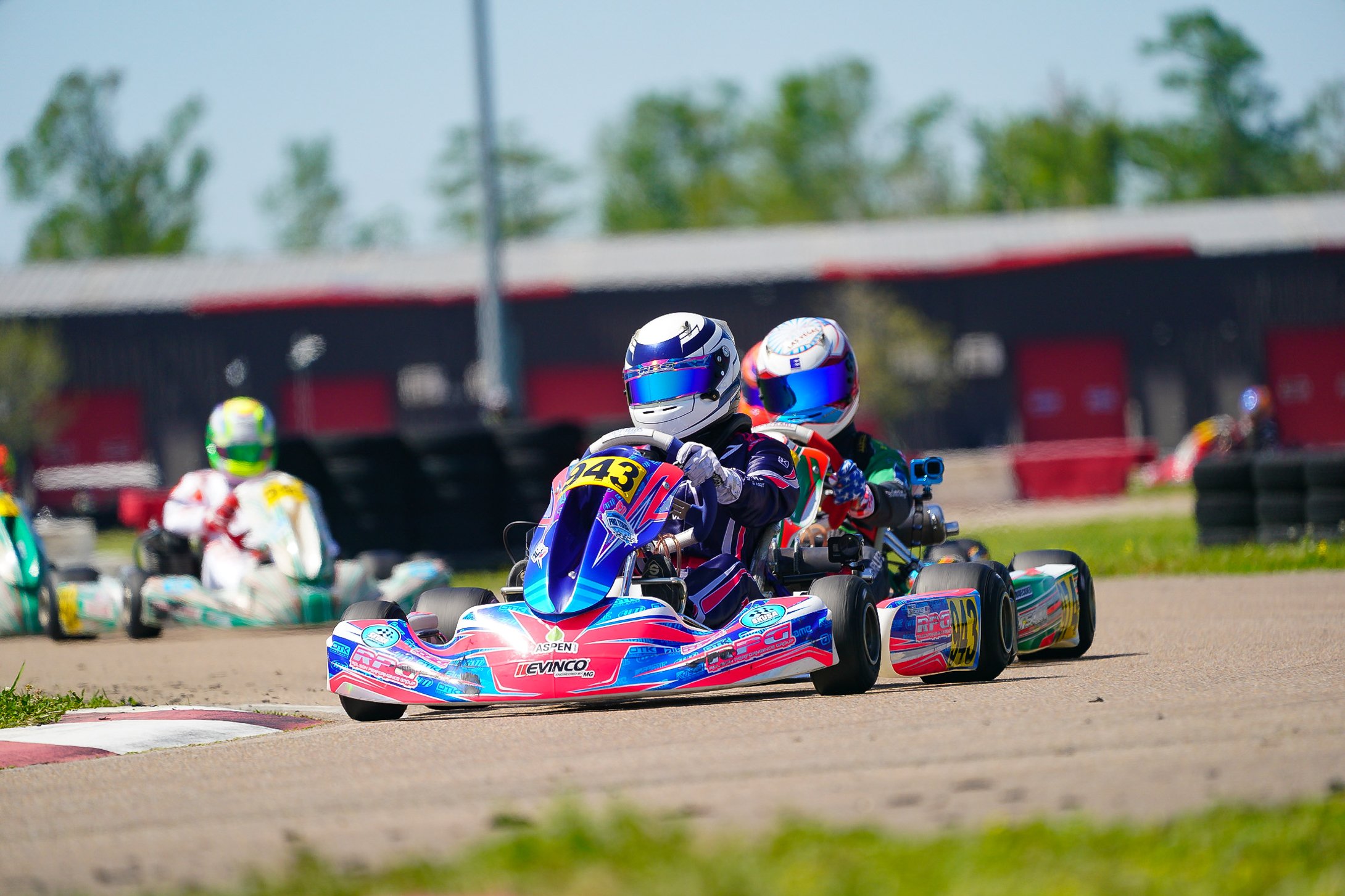 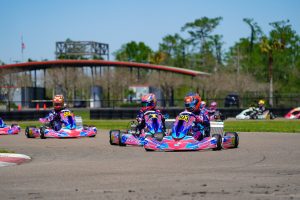 NEW ORLEANS, LOUISIANA (April 3, 2022) – After a stellar winter series season, Rolison Performance Group headed to the opening rounds of the Superkarts! USA Pro Tour this past weekend (April 1-3) to contest the fifth annual WinterNationals at NOLA Motorsports Park. The event featured over 230 entries in the IAME and KZ categories and RPG fielded 25 drivers in eight of the nine categories. The team was deep in the fight all weekend and Mike Rolison’s RPG drivers left New Orleans with three wins, 13 podium finishes, and 27 top-10 results.

Four-time SKUSA Pro Tour champion and 2021 SuperNationals winner Ryan Norberg began his run for another title with a big X30 Senior win on Sunday. Even more impressive, the overall story on Sunday was a dominating RPG 1-2 finish, as Nate Cicero chased Ryan all race and led late in the 20-lap main as well. Ahead of this race, which was the final one of the weekend, a total of eight drivers filled the grid with Rolison Performance Group colors on Kosmic chassis and AVP powerplants. 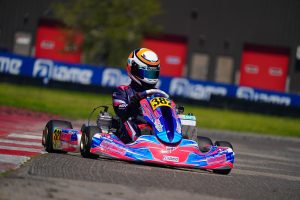 The event began with rain on Saturday morning that affected both the qualifying sessions and the Prefinal. Cicero led the RPG contingent with a fourth in wet qualifying, while Norberg timed in eighth, just ahead of reigning SKUSA Pro Tour X30 champion Hannah Greenemeier (9th), Jason Leung (10th), and Wes Duchak (11th). Donovan Bonilla and Laurent Legault were 15th and 16th, while Hayden Jones started his incredible march to the front from 28th. In the shortened Prefinal, Cicero showed his true pace, taking the victory and the pole for the Final. Jones was the hard charger, advancing 21 positions to get to seventh. Norberg fell to 28th due to contact, as did Greenemeier, finishing one lap down. In the full-distance main event, Cicero scored a podium finish in seventh while Norberg stormed his way forward, making up 19th positions to finish ninth, turning the fast lap in the process. Four RPG drivers finished in the top-10, as Jones led on the final lap but just didn’t quite seal the deal over the last few corners. It remained a stellar run that resulted in a sixth-place finish after a pushback bumper penalty. Greenemeier was the hard charger in the race, making up an astonishing 28 positions to finish ahead of Norberg in eighth. Bonilla moved up five spots to finish 13th while Duchak advanced 13 positions to 19th in the final classification. Legault finished 27th, while Leung retired on lap 6.

On Sunday, the RPG drivers were again in the spotlight as Norberg and Cicero finished 1-2 in all three sessions. Legault, Leung, Jones, and Greenemeier all qualified in the front half of the stacked 45-kart grid. In the Prefinal, Legault and Greenemeier finished 19th and 20th, with Leung in 24th. In the main event, Norberg broke away quickly to develop a gap, and Cicero eventually did the same, chasing down his teammate to set up a thrilling battle for the win. Cicero took over the lead late in the race, but Norberg came back to re-take the point and he would not give it up through to the checkered flag. Jones was the next highest finishing RPG driver in 19th. 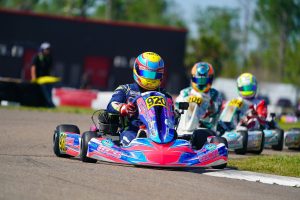 RPG fielded six entries for the ultra-competitive KA100 Senior class at the WinterNationals, including Cedric Lupien, Gia Cicero, Caleb Shrader, Kieran Rogers, Jack Doyle, and Taila Akigami. On Saturday in the challenging wet conditions, Lupien led the way in qualifying by timing in third. Shrader was also in the top-10 in sixth. Lupien was part of the lead group all weekend and he finished second in the Prefinal and then used his vast experience to make a fantastic in the final corner on the last lap of the race to jump from third to first. Lupien won by just 0.230 seconds to start the weekend in style. In that first KA100 race of the weekend, RPG put three drivers in the top-10 and five in the top-15. Shrader finished sixth while Cicero came from the tail of the field to 10th in a stellar drive in the rain. Rogers and Doyle finished 12th and 13th, respectively. Akigami was 22nd.

On Sunday, Cicero and Lupien were strong in the dry conditions. Gia turned in her best career Pro Tour qualifying performance in third, just ahead of Lupien in fourth. Cedric advanced to second once again and Gia fought hard in the lead pack and was sixth, putting two RGP Kosmics in the front three rows for the start of the main event. The race was eventful as both drivers were part of the action upfront. Cicero would eventually score her first SKUSA Pro Tour podium with a strong third place finish, while Lupien backed up his Saturday win with a top-five. Shrader delivered another solid performance as he moved from 17th to ninth, while Doyle also advanced four positions to 12th. Rogers was again in the top-15, while Akigami gained more crucial national level experience, turning her fastest lap of the day in the final. 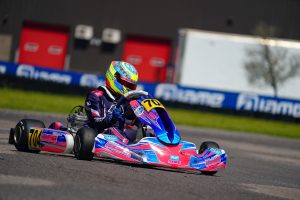 Caleb Gafrarar has enjoyed an extremely strong start to the season with wins in the SKUSA Winter Series, ROK Cup Florida Winter Tour, and the United States Pro Kart Series. Gafrarar was immediately on his game in Saturday’s wet qualifying, topping the charts to take the pole for the Prefinal. Caleb finished sixth in the Prefinal, but he was not to be denied in the main event as he moved to the front and pulled away at the end to take a 2.226-second victory. Ernesto Rivera made his RPG debut at the USPKS weekend in March and was immediately a factor at the WinterNationals as well. He was 12th in qualifying and 17th in the Prefinal, but he moved forward in the main event to score a positive top-10 result. On Sunday, Gafrarar picked up where he left off and grabbed another pole in qualifying and in keeping with his advancement, Rivera stepped up his game and was fifth at the end of the short session. Both drivers were in the lead battle in the Prefinal and finished second and fifth, respectively. In the main event, Gafrarar was going for nothing but the win and was caught up in an incident, falling to ninth on the final lap. Rivera was just behind the lead group and outgunned the two drivers he was battling with to finish sixth.

RPG’s KA100 Junior line-up was in the hunt all weekend long in New Orleans. Gafrarar qualified on the pole on Saturday in the rain and then finished second in the Prefinal. Rivera was on his game as well in the tough wet conditions, timing in fourth quick, and he held his position to line-up right behind Caleb for the main event start. Graham Trammell joined Gafrarar and Rivera in KA100 Junior and he qualified 16th and then grabbed two spots in the Prefinal for 14th. Gavin Wardle had a rough day and did not make it to the end of either the Prefinal or the Final. In the shortened 18-lap race, Gafrarar and Rivera finished where they started in second and fourth respectively to gain solid points to start the championship chase. Trammell was in the middle of a heated battle and finished 16th. On Sunday, Rivera improved his outright pace in the dry and qualified second. Gafrarar capped the top-five, while Trammell timed in 22nd. Caleb moved to second in the Prefinal, but Rivera fell to 14th and Trammell lost a couple of positions as well. Gafrarar was battling for the win in the main but last lap contact dropped him down the order and he finished seventh. Rivera worked to steadily move forward, advancing from 14th to tenth. Trammell ran a similar pace as Saturday and finished 16th in the final classification. 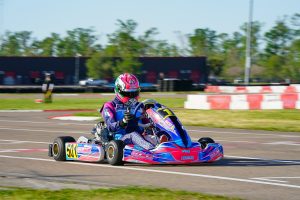 Reigning SKUSA Pro Tour champion Mario Barrios (Kosmic) finished fourth for RPG in the opening X30 Masters race and then bounced back for second on Sunday. Pete Vetter joined the RPG team in New Orleans and he steered his Exprit to a pair of third-place podium finishes. Victor Jimenez carried the RPG banner into the Master Shifter class and he was steady all weekend, taking home a pair of runner-up finishes running his Tony Kart.

Alan Bonilla was the team’s sole driver in the Mini Swift class, and Rolison is very focused on his development as this is Alan’s first year of competing on the national level. This weekend’s Pro Tour opener provided Bonilla with valuable experience, and he fully leveraged that, completing every possible lap. He qualified 34th in the wet conditions on Saturday morning and then advanced to 23rd in the Prefinal, ultimately finishing 30th. On Sunday, Alan timed in 33rd and again drove forward in the Prefinal to finish 31st, running in the middle of a big pack of karts. In the main event, he finished 27th.

Jackson Gibson (Kosmic) had a strong start to this year’s SKUSA Pro Tour in the Micro Swift class. Jackson qualified sixth on Saturday and then finished eighth in the Prefinal before dropping to 15th in the main event. Gibson came back strong on Sunday and was again quick in the qualifying session and was the sixth fastest driver to start on the outside of the third row for the Prefinal. Jackson was on the move and advanced to second, and then in the 18-lap final, he scored a strong top-five finish.

The next event on the Rolison Performance Group schedule will be a late April club race at the GoPro Motorplex to prepare for the second event of the United States Pro Kart Series, which is set for the April 28-May 1 weekend in Mooresville, North Carolina.