The 2022 Superkarts! USA Pro Tour is set to kick off this weekend (March 31-April 2) at the NOLA Motorsports Park. The fifth edition of the SKUSA WinterNationals at the Avondale, Louisiana will host the opening two rounds of the championship program, which celebrates the 13th season. The ‘Big Easy’ always provides a threat of rain, with Saturday looking to be the day that could be the most impacted in terms of wet weather racing.

This weekend’s is the largest WinterNationals on record before walk-up entries at 224 in the five-year history of the event. The first edition came in 2017 at NOLA and was there the year after before moving to the CalSpeed Karting facility in 2019. COVID-19 halted the 2020 edition as Friday practice was wrapping up and the world changed over the coming days. The WinterNationals returned in 2021 to NOLA, with all four previous editions featuring over 200 entries. 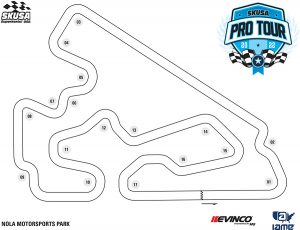 NOLA Motorsports Park was built in 2011 and has become a world-known facility. The track hosted the 2013 Rotax Grand Finals, the only time the ‘Olympics of Karting’ was held on USA soil. The 1.1-mile course features one of the longest straights in North America, many back-and-forth corners, and very fast sections with plenty of passing opportunities across the 17 turns. 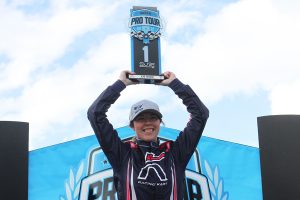 The Pro Shifter division has grown since last year, welcoming 19 drivers set to compete. The target is three-time series champion AJ Myers (Magik Kart USA), who won five of the six rounds in 2021 – including both features at NOLA. The usual suspects are there to battle, including former champion Jake French (PSL / Birel ART) and four-time SuperNationals winner Billy Musgrave (Factory Kart). GFC Karting is going all-in on the Pro Tour for the 2022 season, bringing four drivers with three winning already this year at Challenge of the Americas. Hunter Pickett (GFC) claimed the championship off three wins, while Kyle Wick (Trackmagic) won twice and Jacob Gulick (GFC) got that first shifterkart victory. Add in Cole Shade (Trackmagic) to contend for a podium finish. The big story is four-time SuperNationals winner Danny Formal (LEM / Formula K) unable to compete due to a positive COVID-19 test prior to returning to the USA. Formal was coming off three straight wins and the championship at the Florida Winter Tour. A solid replacement was brought in as Connor Zilisch will make his Pro Shifter debut. With championships and victories in Cadet, Junior and Senior single-speed competition, the 2022 Trans Am Series and Mazda MX-5 Cup will make his shifterkart debut.

The field is at 25 drivers for the competitive KA100 Senior division. Coming in with the momentum is 2022 SKUSA Winter Series champion Carson Morgan (RPM / Tony Kart). Morgan is a six-time Pro Tour champion in Cadet and Junior action. Now the Senior rookie begins his bid for a possible seventh title. His brother Cole Morgan won the championship last year, however, is not listed as racing in the KA100 Senior class. Double duty driver Jeremy Fletcher (GWR / Tony Kart) joins him as one of the top rookies. Among the veterans are Oliver Calvo (LEM / Redspeed), Connor Ferris (TFR / Kart Republic), Canadian Cedrik Lupien (RPG / Kosmic) and Caleb Shrader who won at the Pro Tour in Utah last year. Coming off victory at the TSRS event last weekend is Alex Stanfield (GWR / Tony Kart), with Gia Cicero (RPG / Kosmic) putting in a podium finish after showing speed all winter. 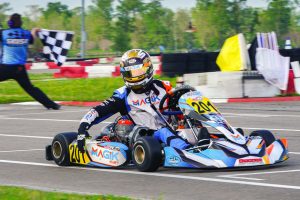 Both categories have 31 drivers in the field, with many going double duty. Gafrarar, Meza, Cooper Shipman (IRM / Tony Kart), Parker DeLong (RPM / Tony Kart) and Jesus Vasquez Jr. (Nash / EOS) among those racing both classes. A number of other drivers could be in podium contention, including west coast drivers Christian Cameron (AKR / Tony Kart) and Stephen Eisert (SSM / Exprit) who both won at the series final for Challenge of the Americas, with Cameron taking home the title. Gafrarar and Meza went 1-2 in KA100 with Ivanna Richards (HRI / Parolin) placing third last weekend. 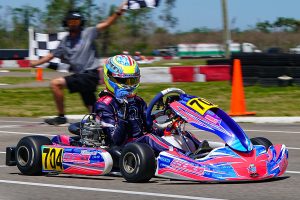 Numbers are down once again in the X30 Master division, with only five pre-entries. Defending champion Mario Barrios (RPG / Kosmic) is attempting to repeat with SKUSA Winter Series champion Danillo Ramalho (REM / Kosmic) his top rival. The Master Shifter division has six in the entry list, which does not include the top-two from last year. Five-time champion Jordon Musser is not competing along with Bermuda driver Scott ‘Skitchy’ Barnes. Victor Jimenez (RPG / Tony Kart) and Vincent Cossard (PSL / Birel ART) come in with the most experience in the field, however, Harden Motorsports Group has a trio of drivers, including Robert Fiege, Anthony Stiffler and Ken Schilling looking to contend for podium finishes.

A total of 39 drivers are set to compete in the Mini Swift division, with another champion graduated up to the next level as Enzo Vidmontiene is now in the Junior ranks. This opens up the door for a new champion in the category, with many drivers the odds-on early favorites. Jack Iliffe (IRM / Parolin) finished second in the standings last year, picking up a victory. He leads a host of returning drivers including TSRS race winner Carson Weinberg (SCR / CRG). SKUSA Winter Series champion Oliver Wheldon (JC / LN), Asher Ochstein (Supertune / Tony Kart), Isaac Malcuit (AKT / Kart Republic), Vivek Kanthan (Parolin USA), and Sarah Bradley (Parolin USA) lead the ‘veteran’ Cadet drivers. A good group of rookie drivers are coming in from Micro last year, including last year’s champion Gianmatteo Rousseau (Supertune / Tony Kart), race winner Keelan Harvick (Harvick / Parolin), Phaethon Saradpon (AKT / Kart Republic) and 2022 SKUSA Winter Series champion Alessandro Truchot (Parolin USA) making the jump up for this weekend. Finishing behind Weinberg and Iliffe at the TSRS event was Tyler Roberts (Parolin USA), coming off victory at the USPKS opener. 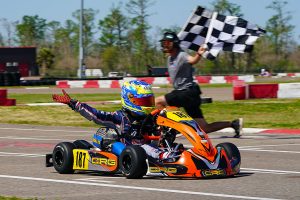 No returning Micro Swift winners in the 23-driver field for this weekend with the large contingent of drivers graduating to Mini. Ashton Woon (Nitro Kart) is among the more experienced drivers in the field, winning on the west coast in Mini competition while finishing second at the Winter Series. Rocco Simone (Parolin USA) was right there all winter, coming off a win at the USPKS opener. Troy Ferguson (Benik), Jaime Garcia (Parolin USA), Jackson Gibson (RPG / Kosmic), Jaxon Porter (Benik) and Drew Walz (Mottaz / Birel ART) are among the names to watch.

Tune in to the EKN Social Media channels for updates, photos, videos and more all weekend from the NOLA Motorsports Park for the fifth edition of the SKUSA Pro Tour WinterNationals and watch for daily reports after Saturday and Sunday.