Enzo Deligny: A major international victory in OK-Senior at the age of 13! 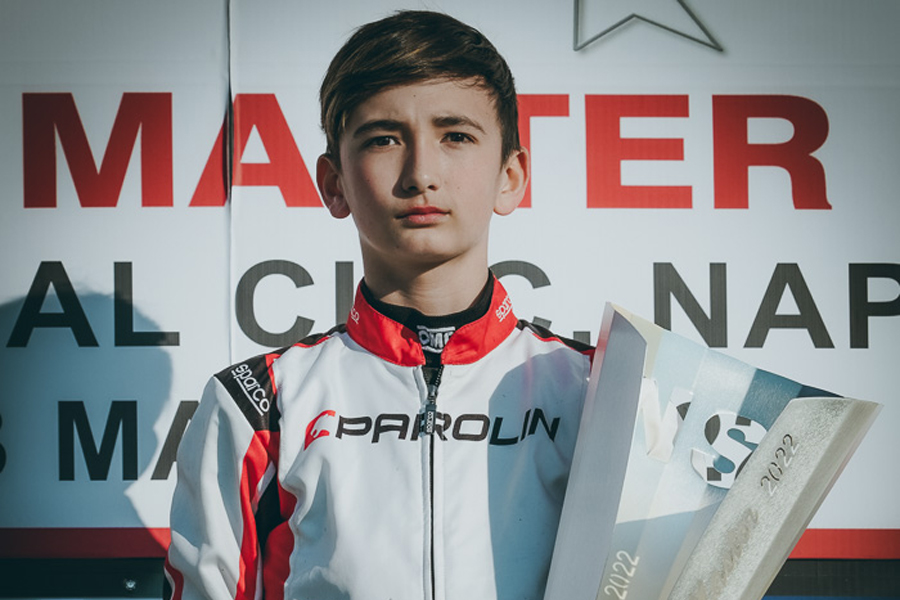 Enzo Deligny’s choice to enter the OK-Senior class after only one full season in OK-Junior, as well as his decision to play the continuity game with the Parolin Motorsport team and the TM Racing engine manufacturer paid off… The French driver only needed three races in his new class to take the top step of the podium! On the international circuit of Sarno, near Naples in Italy, Enzo won the Final race of the WSK Super Master Series. Starting in 9th place, he overtook his rivals one by one to win unchallenged.

Enzo Deligny is a young and talented karting hopeful, determined to succeed in order to open the doors to single-seater racing. His progress over the last few years has been impressive! Noticed from his beginnings in China where he was born, he has not failed to progress at the forefront and to achieve podiums when he moved to the United States. Since the end of the 2020 season, he wanted to pursue his career in Europe and there again, success was waiting for him. Brilliant in OK-Junior last year, he is already performing well in OK.

“It’s true that at the end of the season, we hesitated to do another year in OK-Junior, as my age allowed, in order to take more trophies,” admitted Enzo. “But I had already had the opportunity to win in this category in 2021 and several of my opponents whom I regularly fought with had to move up to OK. In the end, we decided to go for it and I don’t regret the choice. OK is the best category to progress technically and mentally, to gain experience and to learn about single-seaters in a very strong field. Moreover I trusted Parolin Motorsport and TM Racing to provide me with very good equipment. Marco Parolin’s team was keen to show its ability to win again in this category.”

The triumph of youth

For Enzo, the 2022 season in OK started on the South Garda Karting of Lonato, with two first remarkable performances: a 7th place at the end of January in the WSK Champions Cup, followed by a 6th position three weeks later in the opening race of the WSK Super Master Series. “I couldn’t take part in the next two events because I had to return to the United States between February and the beginning of March. I was looking forward to getting back behind the wheel of my Parolin-TM Racing kart, even though I knew it wouldn’t be easy against perfectly prepared drivers.” The OK class is made up of the best drivers in the world, with those who are about to move up to single-seater racing on the one hand, and on the other hand much more experienced competitors, aged between 16 and 20, who have made karting at the highest level their main speciality.

At Sarno, Enzo’s long weekend started with the 10th fastest time out of a total of 57 drivers, which ensured him a place on the second row in the Qualifying Heats, which he finished successively in 4th, 11th, 2nd and 4th positions, with a fastest lap in the race at an average speed of over 100 km/h. He confirmed this in his Prefinal with a 4th place and the absolute record of the meeting at that time of the event. “Starting 9th in the Final, I knew that the start would be key to the race,” commented Enzo. “When I saw that I was 5th after the first lap, I told myself that victory was within my grasp, because with the team we were able to opt for an aggressive strategy due to my perfectly controlled tyre management from Qualifying onwards.” He was 2nd on the fourth lap and passed the leader on the seventh lap, before going on to win in style! “I would like to thank the whole Parolin Motorsport team, Marco Parolin my team manager, Lorenzo Travisanutto my coach, Simone my mechanic, the TM Racing engine manufacturers and all the partners who support me. This is a very good omen before the FIA Karting European Championship which will start in Portugal on the Algarve International Circuit in Portimao from 8th to 10th April,” concluded Enzo Deligny.