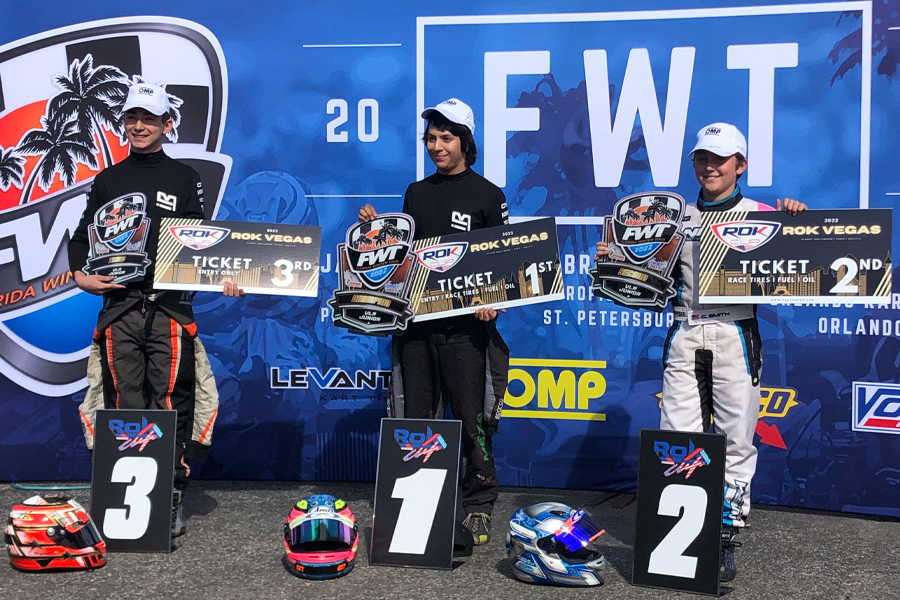 It was the final round of the ROK Cup USA Florida Winter Tour for Charlie Smith and the Smith Factory Racing / Nash Motorsportz team, and with two podium results in the first two events, Smith was looking to keep his podium streak alive. Taking on the Orlando Kart Center facility in Orlando, Florida for the first time, Smith would compete in both the ROK VLR Junior class as well as ROK Junior in a weekend that featured dramatic weather swings.

“The Orlando Kart Center was a new facility or me, but I think I was up to speed quick in testing,” explained Smith. “We qualified well and ran in the top-five all weekend long in the VLR class until Sunday when the cold weather hit, and we struggled a little with the changing conditions.”

After qualifying in the second position on Friday, a trio of top-five heat race results with fifth, fourth and third place finishes after starting on the difficult outside of the front row, Smith would earn enough points to maintain his starting position off-pole for Saturday afternoon’s prefinal. With wet weather sweeping through the area and Saturday’s heat races completed in the wet, prefinals would see Smith back on the dry weather LeVanto tires as he turned his second place starting position into a third-place result. Back to the track on Sunday and fortunate to start on the inside of row two, Smith battled hard in the top-five but eventually crossed the stripe in the sixth position.

Smith continued, “Disappointed to end the Florida Winter Tour the way we did in the VLR class after being so strong all series and all event long. Happy to earn the Vice-Championship in the class, and I think we showed that we had pace to compete as I look forward to racing towards more race wins and podium results in the future.”

Also competing in the ROK Junior class, Smith was consistent through qualifying and the heat races as he qualified on the inside of row eight and earned three 15th place heat race results. Starting thirteenth for Saturday afternoon’s prefinal, Smith gained another position to end his day in twelfth and score an outside row six starting position for Sunday’s main event. Looking to move forward and continue to build his knowledge base, Smith finished 14th on track but was given an eight second penalty for both on track contact and a push back bumper that relegated him to 18th on the results sheets.

Smith added, “I learned a lot, but I am now focused on the rest of the season.”

Next up for Charlie Smith will be the first round of the SKUSA ProTour at NOLA April 1-3.

For more information on Charlie Smith, please contact the Smith Group via email to smithgroup@axisrei.com.