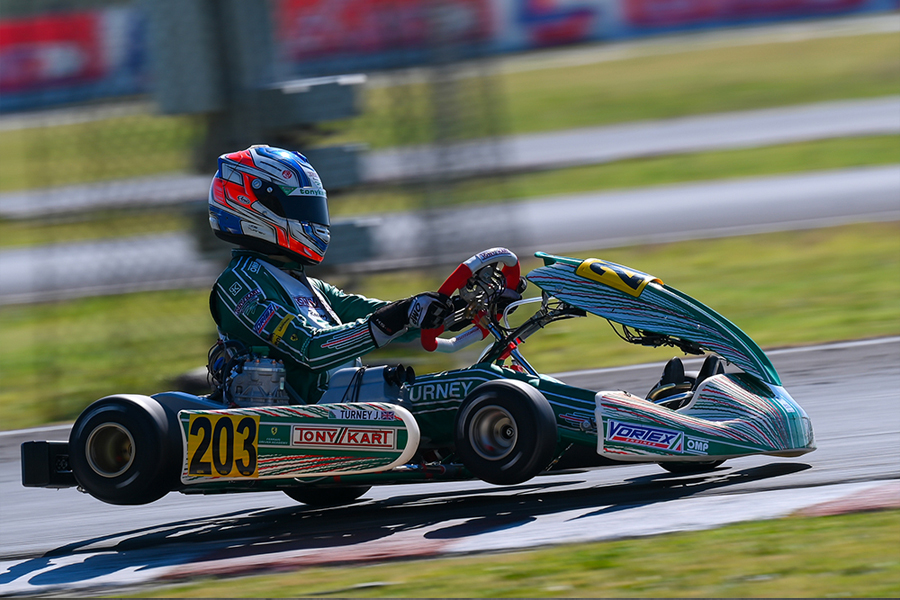 At the Naples International Circuit, on the occasion of the fourth and last round of the championship, our Tony Kart Racer 401 RR conquers the first title of the season with Joseph Turney in the OK category.

The WSK Super Master Series 2022 ends in the best way for our Tony Kart Racing Team. With a victory and a second place in the last two rounds, Joseph Turney, on the International Naples Circuit, is the 2022 champion of the OK category thanks to the solid technical Tony Kart Racer 401 RR-Vortex DST pack, signed by OTK Kart Group. In Sarno, positive performances also in the KZ2 and OKJ classes, still with the “401 RR” chassis, combined with Vortex RTZ/RSZ and DJT engines respectively, as well as in the MINI class, with the Tony Kart Rookieand the MCX unit, also by Vortex.

Turney makes no mistakes in the last round of the championship in the OK category. The British driver was among the five fastest drivers at Sarno right from the qualifying sessions and during the qualifying heats he gains a win, two podiums and two fastest laps. With a second place in the pre-final, Turney is on the starting grid of the final in the second row and, when the lights go off, he immediately jumps to the second position. Already at the end of the first lap, Turney leads the race and, thanks to the large gap gained over the main contenders for the title, he finishes the race in second position: enough to celebrate the deserved success in the championship.
Better and better weekend for Luigi Coluccio and Tuukka Taponen, both in contention for the title. The Italian recovers not less than 13 positions between the qualifying and eliminatory heats, finishes second in the pre-final and, at the end of the final, ranks among the top ten. The Finnish driver also climbs 13 positions in the general ranking after the qualifying heats and finishes third in the pre-final. In the final, Taponen is right behind his teammate Coluccio.
The positive growth of James Egozi, in his first season in the category, continues. The American driver, thanks to a series of useful results in the qualifying heats, ends the Saturday in the Top 10. Also in the final Egozi fights for a place among the top ten, but at the end of the race he receives a 5-second penalty for the front spoiler in a wrong position. Good performance in the final race of the weekend for Oscar Wurz, who climbs the ranking for a total of 12 positions, as well as for Keanu Al Azhari, at his first race of the season with our colours. Little luck, instead, for Kuba Rajski and Liu Ruiqi, however authors of convincing results on the track of Sarno.

In OKJ, Jan Przyrowski is the best of our drivers in the race. The Polish driver is third in the standings at the end of the four qualifying heats, where he collects a win and a second place. Unfortunately, a 5-second front spoiler penalty given at the end of the pre-final sends Przyrowski six places back in the standings. But the Polish driver does not give up and takes the sixth place in the final, a race also attended by Enzo Tarnvanichkul. Due to a difference of a few penalty points, Jimmy Helias does not reach the Sunday’s final, after a good recovery between qualifying and eliminatory heats. Alp Hasan Aksoy, Giacomo Pedriniand Maria Germano Neto continue their growth within our Racing Team.

In KZ2 class, Adrien Renaudin gathers important results during the whole weekend and, in a difficult final, he finishes among the best ten drivers in the ranking. Juho Valtanen also has a good chance to play for a place in the Top 10 in the final, but a stop puts an end to the Finnish driver’s dreams of glory. The KZ World Champion in charge, Noah Milell, opens the weekend with a ninth position and runs the qualifying heats with a good pace. Unfortunately, a stop in the third eliminatory heat ruins the Swedish driver’s path, who is forced to start from the back in the final. Simo Puhakka, Jean and Samuel Luyet are also present at the start of the final, while positive signs also come from Laura Camps Torras.

In the MINI category, positive feedbacks for future commitments from Ethan Lennon and Vladimir Ivannikov. Both very young drivers of our team easily gain the access to Sunday’s final.

The next engagement of our Tony Kart Racing Team is the first round of the Champions of the Future (March 24th – 27th) at the Kartódromo Internacional do Algarve, in Portugal, reserved to the OK and OKJ classes.