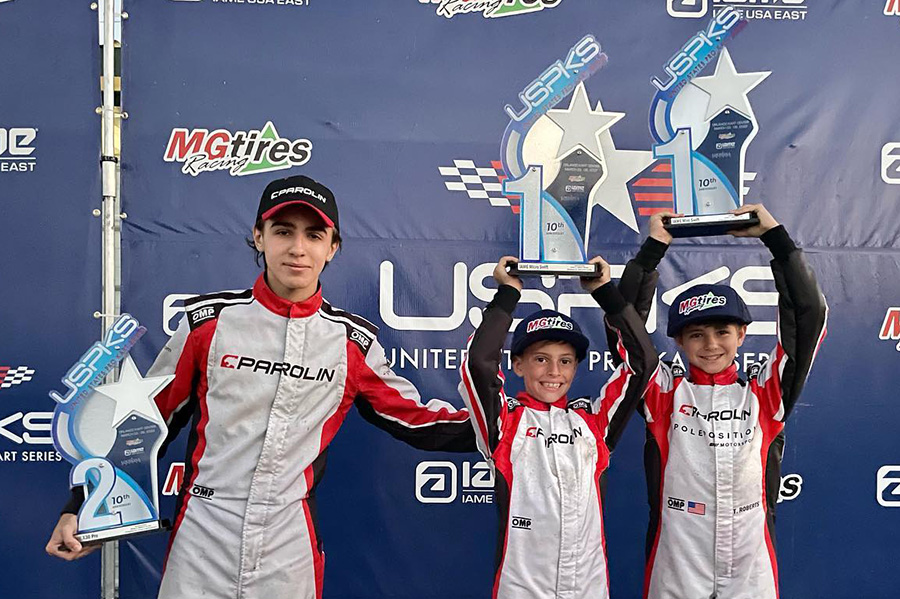 The start of the 2022 season has included much success for the Parolin USA race team, beginning with race wins and a championship in the SKUSA Winter Series and ROK Cup Florida Winter Tour. This momentum continued into the opening rounds of the United States Pro Kart Series at the Orlando Kart Center this past weekend (March 4-6) as the team scored a trio of wins in Mini Swift and Micro Swift, as well as two podium finishes in the ultra-competitive X30 Pro category. Texan Tyler Roberts drove to his first national win in the Mini Swift class on Sunday, as did Rocco Simone in Micro Swift. Salvador della Vecchia also took a win in Mini Swift aboard a Parolin chassis. Alessandro de Tulllio was again in the fight for the wins in X30 Pro and came away with a pair of impressive runner-up finishes to start the USPKS campaign with a bang. 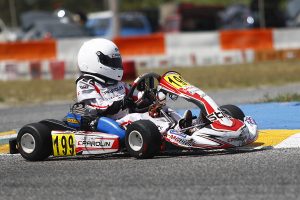 Tyler Roberts helped Parolin sweep the victories in Mini Swift thanks to his first series win in Round Two (Photo: eKartingNews.com)

Roberts had an extremely strong weekend in Orlando, beginning with a pair of fast qualifying performances that put him in the top-five on the Mini Swift Prefinal grids for both Saturday and Sunday. Roberts won his Saturday Prefinal from the off-pole starting position and was right in the middle of the hunt for the win on the final lap. Contact between the two leaders collected Roberts, and he fell to 16th in the final tally despite having turned the fast lap of the race. On Sunday, Tyler took second in his Prefinal and then nipped Della Vecchia at the line by just 0.007 seconds for his first national win.

Sarah Bradley was also on her game for the opening round of the USPKS program, qualifying inside the top-10 in both of the Friday timed sessions (5th / 7th). Bradley finished sixth in her Prefinal to start 12th but she was immediately into the top-10 for the race and was running eighth in the late going when she capitalized on opportunities to an impressive fifth. Sarah came back even better on Sunday and was second in her Prefinal to put her on row two for the main. Unfortunately, a mechanical issue was evident as soon as she pulled off the grid for the Final, and she lacked RPM. She held on the best she could, but was spun by another competition later in the race and was officially classified in 22nd. 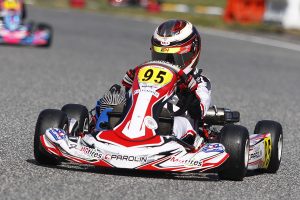 Bobby Klein was also running with Parolin USA in Orlando for the USPKS opener. He finished 18th on Saturday after coming home 11th in his Prefinal, and on Sunday, he finished 7th in his Prefinal and 14th in the main. These were two solid results in a very deep field of drivers.

In Micro Swift, Simone again put the Parolin upfront as his ongoing success fuels his confidence and momentum. Rocco qualified second and fourth for the two days of competition, and despite starting on the outside of the front row for Saturday’s main event, a mechanical issue hindered his ability to battle for the win, and he was forced to take sixth. He came back with a vengeance on Sunday, winning the Prefinal before emerging from a spirited battle for the lead to score his first USPKS victory.

Pasha Ali joined Simone in Micro Swift, and advanced nine positions in Saturday’s Prefinal to move up to 19th for the start of the main event. Pasha fought hard all race and was 22nd in the final classification. On Sunday, Ali was 29th in the Prefinal and gained three positions to finish 26th in the Final. 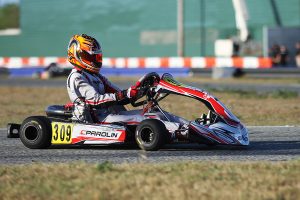 Alessandro de Tullio drove to a pair of runner-up results to open up the championship hunt in X30 Pro at the USPKS (Photo: eKartingNews.com)

Alessandro de Tullio has cemented his place as a frontrunner in the Senior categories with the team this year, and he does a great deal for Parolin USA as a driver coach as well. In Orlando, he was extremely quick on Friday afternoon and qualified in the top-five for both days of competition, Alessandro won his Prefinal and then battled the eventual race winner early in the race, and went on to finish second. On Sunday, de Tullio delivered another impressive run on the Parolin Le Mans chassis to finish second after getting shuffled to sixth at the start of the main event.

Also suiting up for Parolin USA at the USPKS opener was Beckham Jacir, as the Florida driver was running in X30 Junior Pro. Jacir qualified 10th out of 44 for Saturday’s Prefinal and 17th for Sunday. In Saturday action, he finished ninth in the Prefinal but fell to 16th in the main event. Beckham came back on Sunday and held his position in both races to finish 17th.