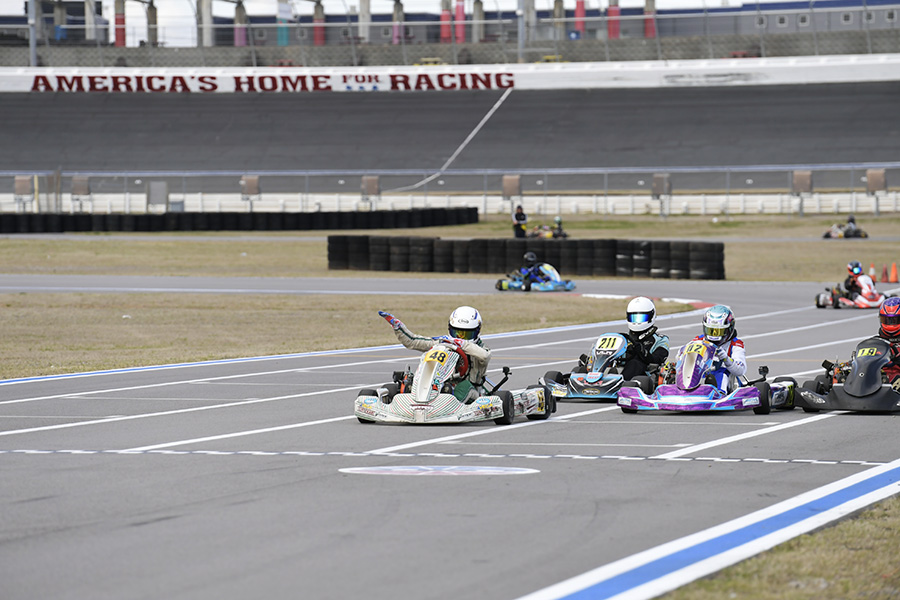 The second major event of the 2022 season for the Cup Karts North America program was contested on the March 4-6 weekend at the historic Charlotte Motor Speedway. The event made its debut in 2019 in Illinois, and this third edition of the Spring Nationals returned to the Concord, North Carolina facility. A total of 279 entries were recorded over the eight Briggs & Stratton 206 powered categories that competed over three days of action.

The CKNA Spring Nationals served as their second major event of the 2022 season, in addition to being the fourth round of the CKNA South Division championship program. Four of the drivers that won this weekend in Charlotte were able to continue the run toward a CKNA ‘Triple Crown’ by backing up their victories from the Winter Nationals over New Year’s weekend. 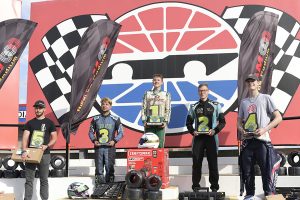 Among the four drivers to repeat their wins from the Winter Nationals was James Overbeck, as the Senior rookie was able to win at the Spring Nationals in Senior Light to back up his win in Jacksonville this January. Mick Gabriel secured fast time in qualifying, only to see Overbeck win both the ODD heat races as Collin Warren and Tristan Farber each took a win in the EVEN heat races. Overbeck earned the pole position for the main event with Farber starting on the outside. Farber took the lead from Overbeck on lap two and led for the majority of the race. With two laps to go, Overbeck took the top spot away and was able to fight off Collin Warren and Gabriel at the line by 97 thousandths of a second. Farber slipped back to fourth while Zach Linsell capped fifth.

Overbeck was the only driver to double up at the Spring Nationals, also winning the headline Senior Medium division. Keegan Clark opened up the event as the top qualifier, however, Mick Gabriel came out as the top driver through the heat races, winning his two motos. Last year’s winner Sean Meier and  the always-quick Dylan Amundsen were the other two winners. Meier joined Gabriel on the front row with Clark and Jacob Duvall filling out the second row. Gabriel led the opening 15 laps of the 16-lap Final. On the final circuit, Overbeck grabbed the top position and won the drag race to the line for his second victory of the day. Gabriel held off Duvall and Warren for the second spot with Meier placing fifth. 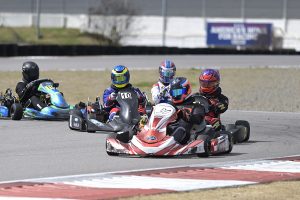 Meier was another driver who continued his run toward the CKNA Triple Crown with a victory in the Senior Heavy class. The only session Meier was not P1 was in qualifying where Eric Fagan set fast time. Meier worked his way up to the top spot on the final circuit of Heat #1 after starting fourth, getting past Fagan for the win. They swapped the lead, but it was Meier who came away with the win in Heat #2. Meier went on to lead all 16 laps in the main to score another win at the CKNA Spring Nationals. Duvall set fast time in his runner-up finish as Fagan slipped to third. Gary Lawson drove to fourth with 2021 CKNA Spring Nationals winner Aren Lloyd rounding out the top-five. 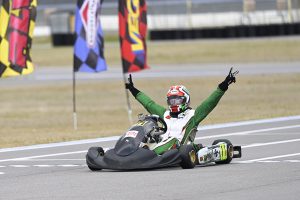 Todd Baron is on a roll in the new Legends class. After placing runner-up at last year’s Spring Nationals, Baron went on to win at the CKNA Grand Nationals 5 and the Winter Nationals in January. He began this year’s Spring Nationals with fast time in qualifying. The heat races, however, saw Doug Cook come through for the win in both as Baron was third and second to join him on the front row for the Final. Don Newman joined the fight in the Final, taking the lead for a few laps from Cook before the double heat race winner reclaimed the top spot. Baron moved himself into second and with two laps to go, led for the first time. He led only the final two laps, scoring his first Spring Nationals victory. Newman won the fight for second over Cook with James Inscoe posting fast lap of the race in fourth. Rounding out the top-five was the ‘Iceman’ Jim Fry. 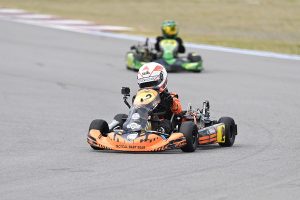 Parker Stewart backed up his win at the Winter Nationals with another victory in Kid Kart (Photo: Rocket Gear Media)

Parker Stewart was the fourth driver to continue his run toward the CKNA Triple Crown by winning at Charlotte in the Kid Kart class. Stewart set fast time in qualifying and won the opening heat race. He lasted just one lap in Heat #2 before retiring, allowing 2021 CKNA Spring Nationals winner Cooper Mull to grab the win. Stewart started third in the Final behind Mull and Barrett Turley. It only took two laps for Stewart to grab the lead in the 12-lap Final, driving away to a seven-second victory. Giovanni Florita drove up to second ahead of Brayden Clossey. Liam Fohr and Ario Barr rounded out the podium with Mull and Turley involved in contact, ending up seventh and eighth respectively. 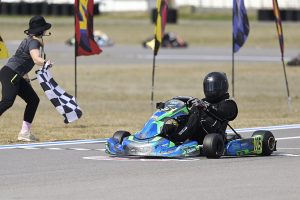 Redemption for Eric Fagan in Masters with a win at the Spring Nationals (Photo: Rocket Gear Media)

The Masters class welcomed a new winner in the category as Eric Fagan nearly pulled off the sweep. Fagan, the provisional winner at the CKNA Grand Nationals 5 until coming in underweight, was P1 in every session except for qualifying. Legends winner Todd Baron set fast time in qualifying with Fagan back in third behind Tim Skinner. Fagan advanced up to the win in Heat #1 before leading all 10 laps of Heat #2. The Final was all Fagan, leading all 16 laps and establishing a 1.2-second advantage at the checkered flag. Baron drove to runner-up finish ahead of Skinner. CKNA Grand Nationals 5 winner Michael Dittmer drove up to fourth, just ahead of Jakab Nyiri. 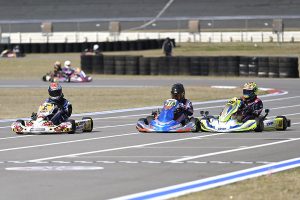 Another new winner to the CKNA major events came in the Junior division. Brady Atwood set fast time in qualifying and was in the battle to win the ODD Heat #1 until getting shuffled back to ninth with Addison Ianniello coming away with the win. Atwood won the second heat as Christopher McKeithan and Ronnie Klys taking the wins in the EVEN heat races. McKeithan and Klys earned the most points to fill out the front row ahead of Ianniello and Spencer Conrad. Atwood started the Final in fifth, and was quickly into third, posting fast laps of the race. McKeithan and Ianniello were 1-2 until the final lap with Atwood going on attack mode. On the last lap, Atwood was able to secure the top spot and the victory just head of McKeithan and Ianniello by 84 thousandths. Conrad finished fourth with Brently Miller completing the top-five. 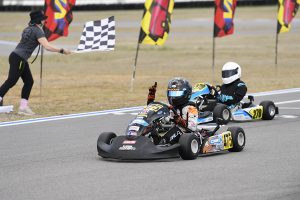 The Sportsman division matched the Senior Light and Senior Medium categories in entries with 46 drivers in each. Jaxon Young opened up the event as top qualifier, however, it was Isaac Malcuit that won the ODD heat races. Josey Chambers and Robert Arana won the EVEN heat races. Malcuit and Arana led the field to the green flag for the Final on the front row. It would be Derek Wargo who put up the challenge to Malcuit, who led the opening 11 laps. From there, the two swapped the lead multiple times until Malcuit was able to secure the top spot and the victory on the final circuit. Wargo, who posted the fast lap of the 16-lap Final, ended up second ahead of Chambers, Young and Arana.

The Cup Karts North America 2022 program continues with the North Division opening up their season on the April 22-24 weekend at the G&J Kartway in Camden, Ohio. The South Division is scheduled to host their final two rounds of racing at the NOLA Motorsports Park in Avondale, Louisiana on May 13-15. The third and final CKNA major of the 2022 season is the Grand Nationals 6, slated for September 29-October 2.