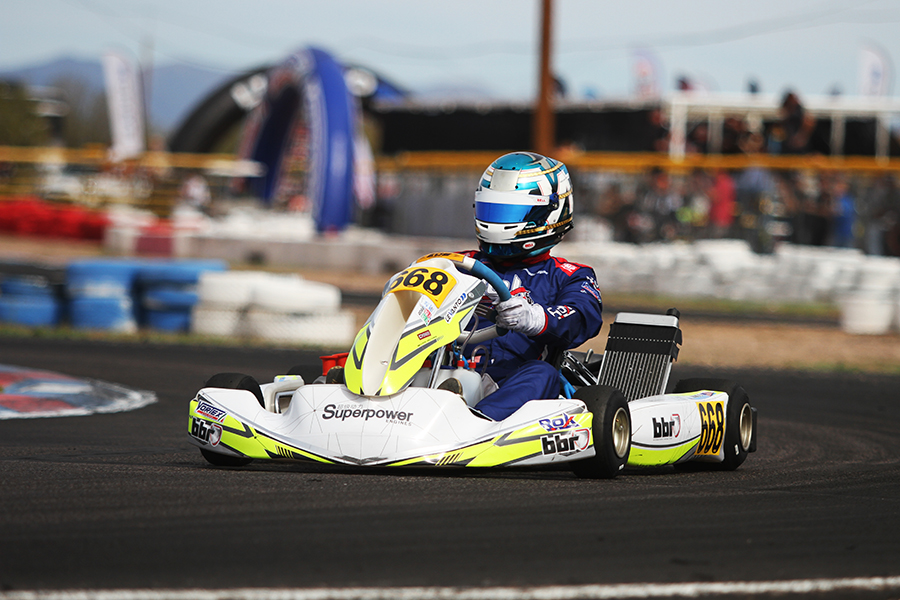 Nearly half the victories claimed during the second event of the 2022 Challenge of the Americas program were by OTK drivers and teams. A total of seven victories over two days of competition at the Phoenix Kart Racing Association facility were secured by OTK branded karts. Two perfect days of weather at the Glendale, Arizona welcomed the ROK Cup USA competitors for the middle portion of the championship chase. Overall, OTK earned 21 podium finishes along with 32 top-five results. 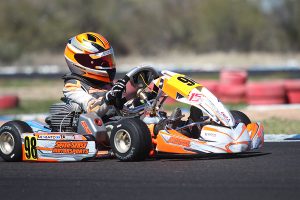 Two drivers claimed two victories in Phoenix, extending their winning streaks from the opening rounds in Tucson. Derek Wang (Full Throttle Karting / EOS) is a three-time defending champion in the Masters ROK division. After two wins at the opening event, Wang added two more sweeps at the second weekend. Wang began with a victory in Round Three, leading an OTK sweep of the podium ahead of Christopher Mann (Ruthless Karting / Kosmic) and Billy Cleavelin (Rolison Performance Group / Kosmic). David Pergande (JH Motorsports / Tony Kart) was fourth. It was the same podium on Sunday in Round Four, with Wang taking home a fourth straight victory over Mann and Cleavelin. Ed Quinn (JH Motorsports / Exprit) had his best finish of 2022 in fourth.

One driver that is standing out on the west coast is Cason Hodge (SpeedSense Motorsports / Exprit). The Micro ROK driver has put in a perfect score over the opening four rounds of the Challenge. Saturday was a sweep of Round Three action with Hodge repeating on Sunday in Round Four, scoring maximum points over the first four rounds of the class championship. 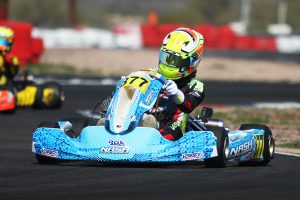 OTK doubled up in the Junior 100cc category thanks to two drivers. Jesus Vasquez Jr. (Nash Motorsportz / EOS) made his 2022 debut memorable with a victory in the Saturday action for Round Three of the series. Stephen Eisert (SpeedSense Motorsports / Exprit) and Christian Cameron (Alex Keyes Racing / Tony Kart) joined him on the podium with Round One winner Alexander Gonzalez (Nash Motorsportz / EOS) in fifth. Cameron became the fourth different winner on the season in the category, winning Round Four on Sunday with AC Chartier (Ryan Perry Motorsport / Tony Kart) placing fifth for his best result of 2022.

The seventh win of the weekend for OTK products came in the ROK Shifter Masters class. 2021 championship runner-up Cliff Kujala (Pure Karting / Tony Kart) stood on top of the podium at his home circuit following the main event on Saturday. Brad Weiss (Pure Karting / Tony Kart) finished fifth for his best result thus far at the series. Kujala returned the following day for a second-place result, bringing his 2022 podium total to three in four rounds of competition. 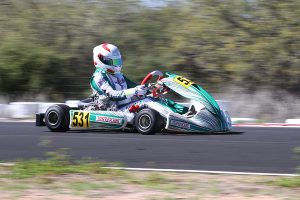 Three podium finishes were earned over the weekend by one driver. Kyriakos Sioukas (Alex Keyes Racing / EOS) ran double duty once again, competing in Senior 100cc and ROK Shifter. Sioukas recorded two third-place results in the single-speed category while placing on the podium in third for the first time in shifterkart competition. Another first-time podium finisher was Hannah Greenemeier (MSquared Karting / Tony Kart), who was hard-charger of the Round Three main event, stealing the final step on the podium in the final corner in a third-place effort. Greenemeier added a fifth-place result on Sunday. Cole Schroeder (Ryan Perry Motorsport / Tony Kart) had his best results at the Challenge in the Senior 100cc class, placing fifth on Saturday and improving to fourth for Round Four.

David Pergande (JH Motorsports / Redspeed) kept his top-five streak alive in the Masters 100cc division. Saturday, Pergande came up one spot short of the podium in fourth after leading early in the Final. He led once again in the Round Four main event, ending the race in the third position. The same for Mini ROK driver Matteo Quinto (Ryan Perry Motorsport / Tony Kart), who was able to place fifth and fourth in the two main events to keep him in the championship chase after two podium results in Tucson. 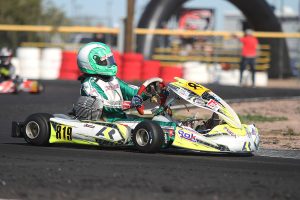 Christian Cameron picked up his first victory in the Junior 100cc division in 2022 (Photo: eKartingNews.com)

The Challenge of the Americas hosts the series finale on the March 25-27 weekend at the Sonoma Raceway in Sonoma, California when Rounds Five and Six are contested.