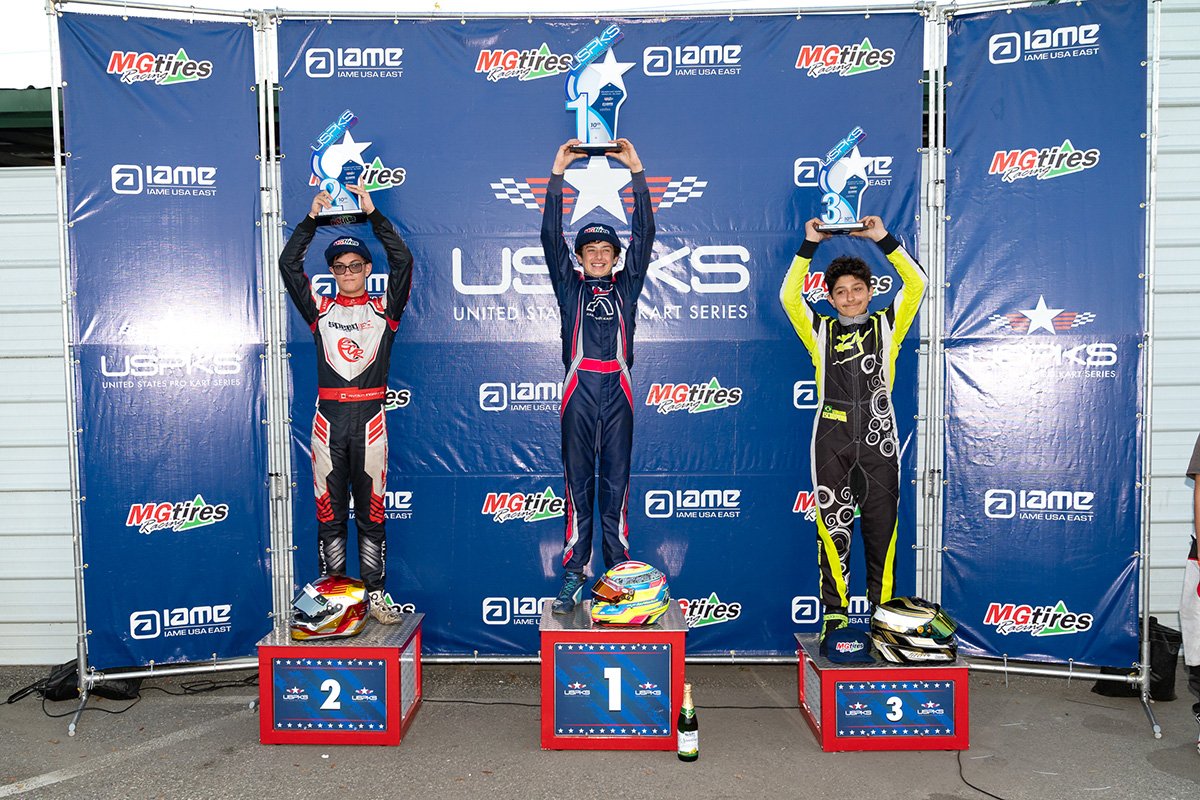 Caleb Gafrarar took the Saturday X30 Pro Junior win and claimed the highest
points total in the class over the weekend, earning $2500 for his efforts
(Photo: Studio 52)

With hurt ribs in February and only a pair of test days prior to the United States Pro Kart Series (USPKS) opener to test his pain tolerance, Rolison Performance Group (RPG) standout Caleb Gafrarar showed all that his recent success is no fluke. With three pole positions, one win and three podium results, Gafrarar continued to show his strength as one of the top junior drivers in North America and claimed $2500 for earning the overall weekend high points total in X30 Pro Junior.

In a different format weekend, Thursday would be the home of practice while Friday would see additional test sessions prior to a pair of qualifying runs for both Saturday and Sunday’s wheel-to-wheel races. With the first timed sessions setting the grid for Sunday, Gafrarar went two-for-two claiming both the KA100 Junior and X30 Pro Junior pole positions. Moving into another timed session in each class to set the grid for Saturday, the Kosmic driver scored the KA100 Junior pole position, his second of the weekend, prior to earning the third quickest lap time in the X30 division.

“Qualifying went well, but we need to be there once racing begins,” explained Gafrarar. “We are in a good position, and I look forward to the challenge. The junior fields here are full of talent.” 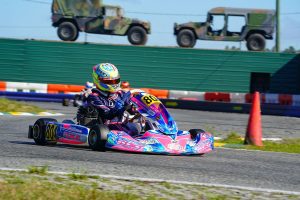 Beginning Saturday’s KA100 Junior prefinal from the pole position, Gafrarar was the class of the field as he led flag-to-flag to score a dominant victory and pole position for the day’s main event. During the final, the competition had found some speed and Gafrarar was in a battle for the win. Despite being the first to reach the checkered flag, the North Carolina resident was a victim of a confusing penalty that saw him end up 35th on the results sheets.

Gafrarar added, “Not sure why I was given a penalty, but I feel that I won that race fair and square. I had a great battle with a fellow competitor, and we had good, clean, but hard racing and I do not feel that either of us put a wheel wrong. Definitely disappointing.”

Returning to the track later that afternoon in the X30 Pro Junior class, Gafrarar led early before falling back to second. In a two-kart battle for the win, Gafrarar made a bold last lap pass to earn his second checkered flag of the day, but this time it counted, and the 2022 multi-time race winner added another victory to his resume.

With round one in the books, round two would take place on Sunday and like Saturday, Gafrarar would start the KA100 Junior prefinal from the inside of the front row. In a six kart battle for the win and an elusive main event pole position, Gafrarar came up on the short end of the stick to finish fourth despite setting the fastest lap of the race. With the prefinal flight format in effect, Gafrarar’s fourth place result would see him line up seventh for the main event but that did not faze the youngster. Maintaining his position on the start, Gafrarar had moved forward and assumed the lead by lap nine. Holding the point until the final circuit, the #804 entry would fall two positions to finish third but added another podium result to his resume.

Rolling off the grid for X30 Pro Junior in the third position, Gafrarar advanced forward and took the lead early as he paced the first six laps of the prefinal. Falling to second at the mid-race point, Gafrarar was able to hold onto the position and earn an outside front row starting spot for the day’s main event. With a pair of podiums already earned on the weekend, Gafrarar added his third with a solid drive to a second place result. Leading early and battling hard until the very final corner, Gafrarar came up a tenth of a second short when the final checkered flag flew.

Three podium results on the weekend will only be enjoyed for a few short days before Caleb G is back on track for the final round of the ROK Cup USA Florida Winter Tour. Taking on the same Orlando Kart Center facility, Gafrarar intends to get his name back on top to close the popular winter series.

Caleb Gafrarar would like to thank Rolison Performance Group, OTK USA, Kosmic, Bell Helmets, Minus 273, From the Ashes and CPI Security for the continued support in the 2022 racing season.