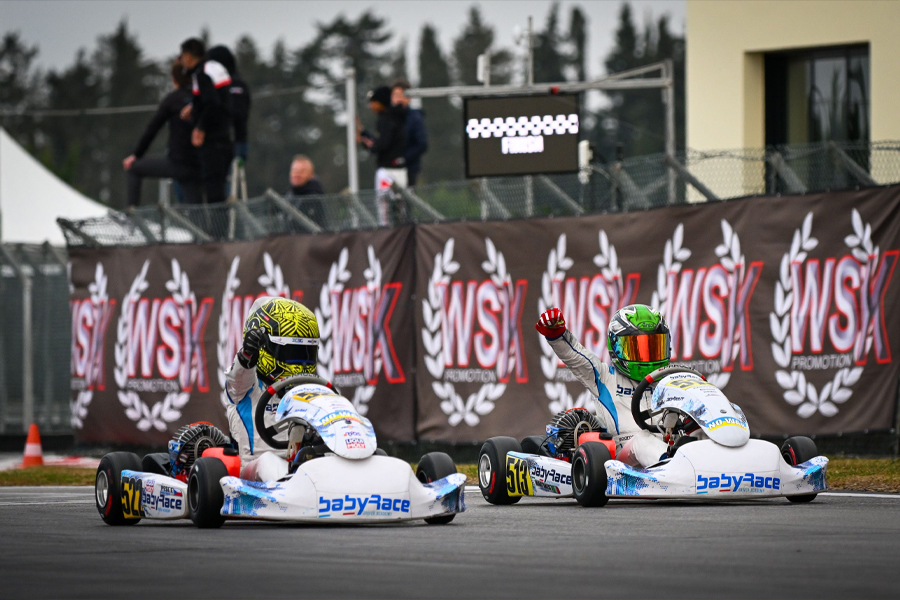 After the rain in the past two days, the final stages of the WSK Super Master Series on Sunday benefited from nice weather that allowed all drivers to show their best at the International Circuit La Conca in Muro Leccese.

A lot of young talents came to the fore in the three categories entitled in this penultimate event, namely OK, OKJ and MINI. The final of OK-Junior was won by Oleksandr Bondarev (Ricky Flynn/LN-Vortex-Vega), that of OK by Joe Turney (Tony Kart Racing Team/Tony Kart-Vortex-LeCont) and MINI’s by Jindrich Pesl (BabyRace/Parolin-Iame-Vega).

The winners of Prefinals.

OKJ. In Prefinal-A of OKJ the victory went to Maxens Verbrugge (Forza Racing/Exprit-TM Racing-Vega), who got the most of the 3s time penalty handed to Dmitry Matveev (Koski Motorsport/Tony Kart-Vortex). Prior to the penalty, the latter had managed to complete a great comeback race and crossed the finish line as the first driver. In Prefinal-B the classification leader Oleksandr Bondarev (Ricky Flynn/LN-Vortex) claimed an important win for the classification.

Bondarev wins OKJ and pulls away in the championship.

Classification leader Oleksandr Bondarev (Ricky Flynn/LN-Vortex-Vega) had the upper hand in the OKJ Final that he has been leading since the beginning. At the flag, Bondarev proceeded Douwe Dedecker (KR Motorsport/KR-Iame), who had been successful in qualifying heats. The fight for P3 was won by Kirill Dzitiev (Ward Racing/Tony Kart-Vortex) due to a penalty handed to Dmitry Matveev (Koski Motorsport/Tony Kart-Vortex), who completed a good comeback race. Matveev was relegated to P4 instead, while the fifth place went to Maciej Gladysz (Ricky Flynn Motorsport/LN-Vortex) at the end of a strong race.

Turney wins the OK Final and is the new classification leader.

Thanks to his experience and speed, Joe Turney (Tony Kart Racing Team/Tony Kart-Vortex-LeCont) secured the victory in OK with a successful overtaking move on Kean Nakamura-Berta (KR Motorsport/KR-Iame) in the closing stages. The latter had to settle for P2. The third position went to Freddie Slater (Ricky Flynn Motorsport/LN-Vortex) from Oscar Pedersen (Ward Racing/Tony Kart-Vortex), as both drivers recovered several places from the starting position. The fifth place went to Rashid Al Dhaheri (KR Motorsport/KR-Iame). Joe Turney installed himself on top of the classification inheriting the lead from Tuukka Taponen (Tony Kart Racing Team/Tony Kart-Vortex), who was only 18th in the Final.

The victory of MINI to Pesl who pulls away in the standings.

A great race was also run in MINI where the classification leader Jindrich Pesl (BabyRace/Parolin-Iame-Vega) managed to take an early lead with his teammate Iacopo Martinese chasing him, as the latter installed himself in P2 a few laps into the race. Pesl crossed the finish line on top trailed by Martinese. The third place went to a strong Christian Costoya (Parolin Motorsport/Parolin-TM Racing). The Spanish driver led his teammate Dries Van Langendonck, who had displayed a great shape in the heats. The fifth place went to Filippo Sala (Team Driver/KR-Iame). Pesl pulled away in the provisional classification.

Complete results are available at: www.wskarting.it/index.asp

The next round of WSK Super Master Series: