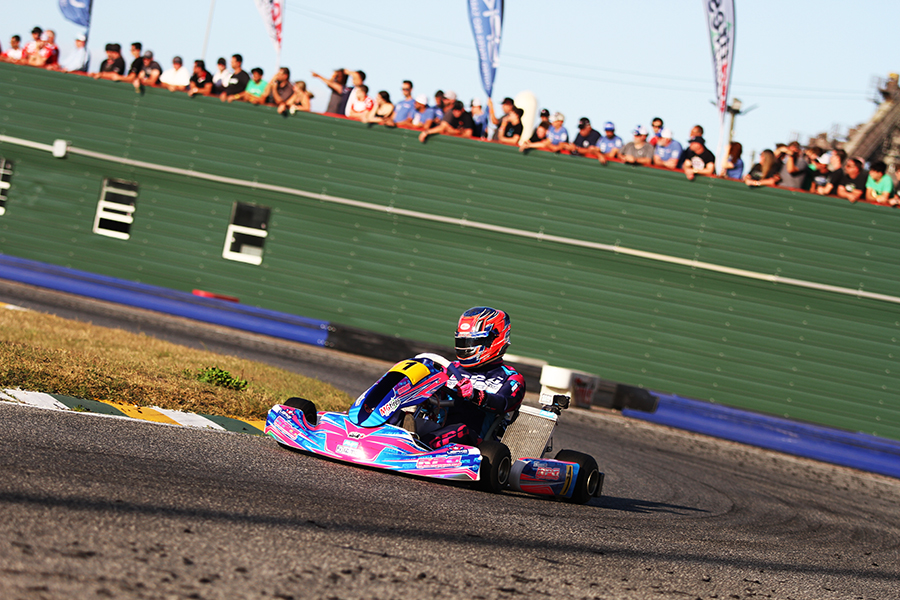 A historic weekend at the Orlando Kart Center as the United States Pro Kart Series opened up the 2022 season with the opening two rounds of the year. The weather was perfect all weekend in Orlando, Florida, with an increased breeze turning into a wind to help keep the over 300 drivers and the rest of the paddock cooler with the warmer temperatures on the day. Rolison Performance Group driver Ryan Norberg began his title defense with a two-win weekend at his home track, while Texan Alex Stanfield recorded his first victory in the KA100 Senior division, leading a group of three others who picked up their first career wins at USPKS.

Norberg (RPG / Kosmic) was able to put in a sweep in the Franklin Motorsports X30 Pro category on the day. The winner from Round One had set fast time in qualifying on Friday and drove to the win in his Prefinal. Canadian Thomas Nepveu (TKG / Kart Republic) won the other Prefinal to join Norberg on the front row for the main event. Neither led the opening lap as Aaron Benoit (U-Race / Tony Kart) came from P4 to grab the lead. He led the opening four laps until Norberg, who fell to fourth at one time, quickly reclaimed the top spot on lap five. From there Norberg performed as he did on the previous day, laying down quick laps in the middle portion of the race to establish a solid lead for the victory. The fight behind him was for the third spot, as Benoit slipped down one more spot with Alessandro de Tullio (Parolin USA) coming up from sixth to earn the runner-up spot. Benoit came under pressure late by 2019 FIA KZ World Champion Marijn Kremers (PSL / Birel ART) – who posted the fast lap of the race. The Dutch driver made a move at the hairpin leading onto the back straight. The two made contact and Kremers came away with the position. At the scale line, de Tullio was given a three-second penalty for a pushback bumper. Despite the penalty, de Tullio remained in second place. Nepveu won the battle for fifth ahead of Jack Jeffers (SCR / Redspeed). 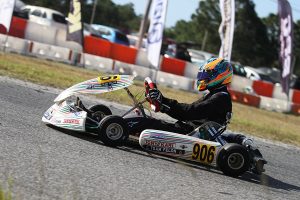 Alex Stanfield escaped with the victory in KA100 Senior, his first at USPKS (Photo: EKN)

The action in the Mike Doty Racing KA100 Senior was a bit sketchy, with rough driving across the board. Saturday winner Brandon Lemke (FMS / Merlin) set fast time in qualifying on Friday and won his Prefinal while rookie Chase Hand (RPG / Kosmic) improved to the win in Prefinal EVEN. Alex Stanfield (GWR / Tony Kart) emerged as top challenger as contact shuffled up the order, involving Lemke and Race Liberante (Race Factory). Lemke nearly lost his battery after the brackets were ripped off. Instead, he grabbed it and held it in his seat, driving with just one hand from lap two until the end of the 18-lap event. Lemke fell to 13th at one point and drove his way up to cross the checkered flag in fifth while posting fast time. Up front, Stanfield and Jeremy Fletcher (GWR / Tony Kart) each led until Liberante got into the mix as well.

That triggered even more racing, bringing in a group of drivers behind them. Coming to the white flag, Stanfield, Fletcher and Liberante were involved in contact at the inner hairpin. This allowed Hand to slip around and cross the line as the leader as the white flag waved. As they entered the corner, he and Finnegan Bayliff (TKG / Kart Republic) made contact, sending Hand spinning around. This put Bayliff in the lead with Stanfield on his bumper. They two fought for the top spot through the final corners, with Stanfield winning the battle. The provisional top-five included Liberante third, Connor Ferris (TFR / Kart Republic) fourth and Aaron Benoit (U-Race / Tony Kart) in fifth. Stanfield was penalized for contact, but a protest overturned the call and reinstated him as the winner, earning his first in the category. Bayliff was penalized for the last lap contact, dropping him to 11th. Liberante was removed from the results following tech. That promoted Ferris to the runner-up position and move Benoit on the podium in third. Lemke was put into fourth with Gia Cicero (RPG / Kosmic) classified fifth. 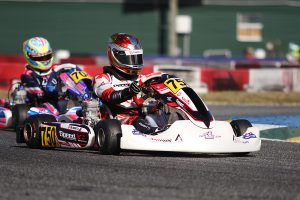 Ayden Ingratta pulled out with the victory in X30 Junior (Photo: EKN)

The Rolison Performance Group X30 Junior fight for the victory was the same two drivers as Saturday. Top qualifier and Saturday winner Caleb Gafrarar (RPG / Kosmic) was beat out by Ayden Ingratta (SCR / Redspeed) in the Prefinal. They continued in the Final with Ingratta showing the better pace. He recorded the fast lap of the race on lap 12 when he took over the lead from Gafrarar, who led for only six laps. Ingratta kept some space on Gafrarar until the final lap when the Saturday winner was able to slip past briefly until Ingratta retook the lead, holding on to the checkered flag for the victory. Leonardo Escorpioni (Zanella / Tony Kart) joined them on the podium with Max Garcia (MPG / WPK) fourth and Teddy Musella (RPG / Kosmic) fifth.

Three drivers had a chance to win the main event in the Timmy Tech KA100 Junior class. Caleb Gafrarar (RPG / Kosmic) set fast time in qualifying on Friday, with Cooper Shipman (IRM / Tony Kart) winning the Prefinal. Both were shuffled back at the start with Helio Meza (IRM / Tony Kart) and Steven Miller (CDR / Kosmic) at the front. Gafrarar was seventh after the opening lap, and fought his way up to the top-two and then the lead by lap 10. He paced the trio until the final lap. Gafrarar ran defensive line into the hairpin leading onto the long straight. Miller got a better run and was able to run past for the lead. He went on to reach the checkered flag first for his first USPKS victory. Meza slipped by for the second spot, dropping Gafrarar to third. Parker DeLong (RPM / Tony Kart) drove to fourth with Max Garcia (MPG / WPK) in fifth. 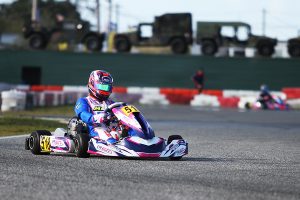 It was a perfect score on the day for Danillo Ramalho (REM / Kosmic) in the Speed Concepts Racing X30 Masters class. Ramalho led from the opening lap of the Prefinal to the last lap in the Final, posting fast lap of the main event to earn maximum points on the day. Contact shuffled up the order early in the Final with Danny Robertson (RPG / Kosmic) jumping out to second. Scott Roberts (SCR / Redspeed) fell to fifth on the opening lap and fought back to land on the podium in third. Defending two-time champ Scott Kopp (FMS / Exprit) was involved on lap one, falling to ninth. He ended up climbing to fourth with Laurentiu Mardan (Tecno Kart USA) placing fifth. 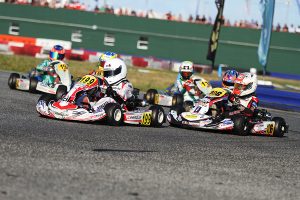 Once again, the DNJ International Services class went down to the wire. Top qualifier Carson Weinberg (SCR / CRG) was the provisional winner in Prefinal ODD, but was penalized for blocking to give Saturday winner Salvador della Vecchia (SAR / Parolin) the race win as Oliver Wheldon (JC / LN) won Prefinal EVEN. Tyler Roberts (Parolin USA) jumped out to the lead in the 16-lap Final until Weinberg fought up from seventh to the lead. He led the next 10 laps to take the white flag as the leader. Roberts and della Vecchia each slipped by Weinberg. Those two fought for the top spot over the last few corners, drag racing to the line with Roberts crossing ahead by seven thousandths of a second for his first USPKS victory. In tech, della Vecchia was removed from the results, promoting Wheldon to second and Asher Ochstein (Supertune / Tony Kart) to third, up from ninth. Gianmatteo Rousseau (Supertune / Tony Kart) was fourth Weinberg in fifth until he was penalized for blocking once again. That moved Kai Johnson (Energy) to fifth. 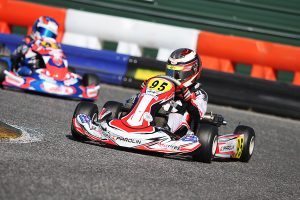 The Team Ferris Racing Micro Swift class welcomed another new winner. Rocco Simone (Parolin) improved from fourth to first in the Prefinal. The Canadian then led the majority of the Final, swapping the lead multiple times with Julian Rivera (Kart Republic). Simone led the last five laps to earn his first USPKS victory. Ashton Woon (Nitro Kart) moved up from fifth to second late in the race with Troy Ferguson (Benik) working past Rivera for third. Drew Walz (Birel ART) recorded a fifth-place result while posting fast time of the race.

The 2022 United States Pro Kart Series will continue on the April 29-May 1 weekend with the Carolina Grand Prix held at the GoPro Motorplex in Mooresville, North Carolina.