Third Success of the Season for Tony Kart 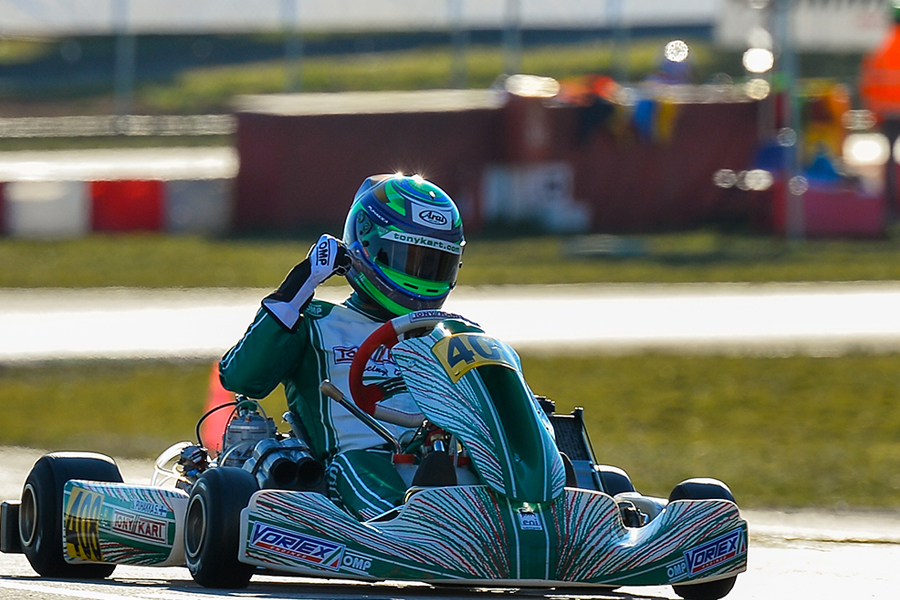 Our Tony Kart Racer 401 RR, at the third round of 2022, conquers another important victory. On the occasion of the Champions of the Future Winter Series in Franciacorta, Simo Puhakka is the undisputed leader of the KZ2 category.

At the first international appearance of the new Franciacorta Karting Track, in the context of the Champions of the Future Winter Series, our Tony Kart Racing Team soon achieves its first success in one of the most competitive international categories: KZ2. The Tony Kart Racer 401 RR, at the third victory of the 2022 season out of three races run, confirms the winning combination with the engines of Vortex, the “engine division of OTK Kart Group”: RTZ/RSZ for KZ2, DST for OK and DJT for OKJ.

Quite a perfect weekend, under all points of view, for Simo Puhakka in KZ2 class. The Finnish driver is already very fast in the Friday afternoon’s qualifying session, where he sets the fastest time overall. From then on, nobody can take Puhakka off from the first position: three victories (and three fast laps) in the three qualifying heats gives him the leadership at the end of the day on Saturday, while the success in the super heat ensures him the pole position for the final. The final race of the weekend is a solo of Puhakka, who plays his part impeccably: he starts perfectly when the lights go off, leads the final for all the 23 laps scheduled and passes first under the chequered flag.

Adrien Renaudin, Jean Luyet and Noah Milell also perform well. The French Renaudin, with two podiums in the qualifying heats and an unfortunate stop in the last race of Saturday, shows his muscles in the pre-final thanks to a second place and ends the final in sixth position. The Swiss Luyet, third in the general standings after the qualifying heats, during the final is a pretender for a place in the Top 5 and finishes behind his teammate Renaudin. Finally, the KZ world champion Milell, second position after the three eliminatory heats on Saturday, is penalized by a stop in the super heat, but in the final he does not give up and finishes in the Top 10.

Solid work also for Juho Valtanen, by just one position out of the top ten drivers of the weekend, and Samuel Luyet, good at recovering 9 positions in the final and securing the Top 15. Second experience with the shifter karts for Alexander Gubenko in our Racing Team, very good in view of future commitments.

In the OK category, Tuukka Taponen and Joseph Turney are our main representatives in the Senior category. During the qualifying heats, Taponen collects two podiums and a first place, while Turney gets a win and signs a fast lap, too. With a second and a fourth place respectively in the super heats, Taponen and Turney have a good chance to fight for the victory in the final: however, due to the start from the outside line, the Finnish driver slides back a few positions, while his British teammate maintains a solid second position until the end. Unfortunately, Turney was denied the podium because of a penalty. Taponen thus gains one position and moves to the fourth place.

After a few bumps in the qualifying heats, Luigi Coluccio shows his full potential on Sunday. The Italian shines during the super heat with a Top 5 and in the final he climbs a total of 12 positions until gaining the final fifth place. At his first race of the season with our colours, Keanu Al Azhari shows off in the final with a climb in the ranking of 15 positions than the starting position and a positive Top 10. Excellent comeback also for Liu Ruiqi, with a total of 18 positions gained. Good performance for James Egozi, who also able to set the best time in the super heats, but then penalized by two stops in the qualifying heats.

More than positive signs in OKJ. Jan Przyrowski makes his solid performance in the qualifying heats concrete (two podiums and a third position), with a fifth place in the final. Enzo Tarnvanichkul is the author of two victories, one in the eliminatory heats and one in the super heat, but a decision of the race marshalls penalizes him with 10 seconds at the end of the final. Good first attendance of the season for Arthur Dorison with our team: the Frenchman achieves the Top 15 also thanks to a series of overtakes in the final. Alp Hasan Aksoy and Jimmy Helias easily get the pass for the final, finally Giacomo Pedrini and Maria Germano Neto treasure a valuable first experience in the Champions of the Future.

No break for our Tony Kart Racing Team, in fact, from 3rd to 6th March, our official drivers will be engaged in the third round of the WSK Super Master Series at the La Conca International Circuit, in the OK, OKJ and MINI categories.