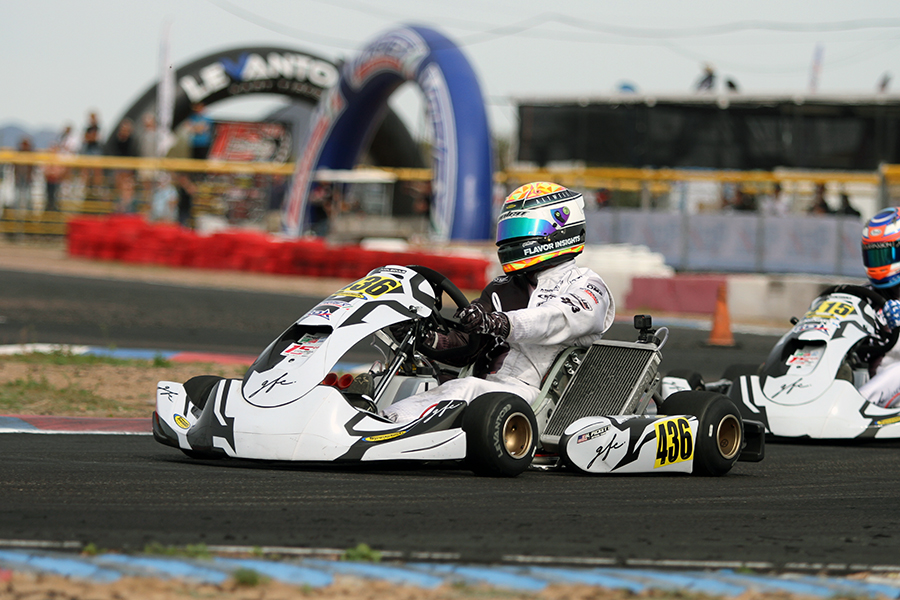 The second half for the Challenge of the Americas began on Sunday at the Phoenix Kart Racing Association with Round Four action contested on the Glendale, Arizona facility. Another perfect day of weather greeted the near 130 entries in the 10 categories continuing the championship chase that began last month in Tucson. Several drivers were able to add to their win total on the season, while others raised the victory trophy for the first time in 2022, including GFC Karting’s Hunter Pickett.

It appeared to be a repeat of Saturday in the SwedeTech Racing Engines ROK Shifter division with Round Three winner Jacob Gulick (GFC) setting the pace in qualifying and winning the Prefinal. Pickett was able to launch off the starting line with more speed to grab the holeshot as Gulick had to slot into second. That was the winning move with Pickett leading all 20 laps and Gulick on the chase, posting fast time in the race to a runner-up finish to give GFC another 1-2 result on the weekend. Kyriakos Sioukas (AKR / EOS) fought off a host of drivers to earn his first podium in the category, placing third. Former champion Ron White (RWR / CRG) ended up fourth with Hannah Greenemeier (MSquared / Tony Kart) recording a second top-five finish on the weekend. 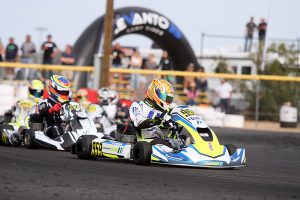 A true duel took place in the main event for the Forward Direction Motorsports Senior 100cc division. Saturday winner Oliver Hodgson (J3 / CompKart) was looking to complete the weekend sweep, setting fast time in qualifying and winning the Prefinal. Double Tucson winner Jake Drew (GFC) set out to end Hodgson’s perfect score. The two put on a great battle over the 20 laps that included running a defensive line beginning on lap two. The game of chess at 70mph was amazing by the two, racing very clean and making outstanding passing maneuvers. Despite their racing, the two were still able to maintain a gap on the fight for third behind them. In the end, Hodgson was able to secure the top spot for his second victory on the weekend. Drew managed to record fast lap once again, helping to add to his championship lead over the rest of the title contenders. Kyriakos Sioukas (AKR / EOS) doubled up on the day in podium trips, placing third once again ahead of Cole Schroeder (RPM / Tony Kart) and defending champion Liam Letzsch (GFC). 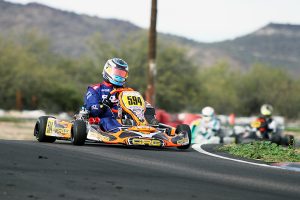 Defending ROK Shifter Masters champion Kevin Woods put himself on top of the podium for first time in 2022 (Photo: EKN)

The Ron White Racing ROK Shifter Masters class was decided by a holeshot. Saturday winner Cliff Kujala (Pure / Tony Kart) was able to record fast time in qualifying, however, lost the launch off the line in the Prefinal to defending champion Kevin Woods (RWR / CRG). In the Final, Woods again got off the line solid where Kujala fell back to fifth in the opening turn. Kujala charged back up to the second spot, and eventually reeled in Woods in the closing laps. He ran out of time as Woods held on after 20 laps to claim his first victory of the weekend. Pushing Kujala to the distance was Alan Morte (RWR / CRG), coming back in the Final from a broken shifter linkage to a second podium result on the weekend. Jonathan Vitolo (GFC / Trackmagic) crossed the line in fourth but was penalized for impeading, dropping him down to sixth to move up Nick Firestone (GFC) to fourth and Bud Grossenbacher (Zanardi) into fifth. 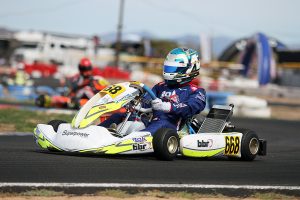 Derek Wang (FTK / EOS) made it four-straight in the Odenthal Racing Products Masters ROK division. While the three-time defending champion was challenged throughout Saturday, Wang turned up the pace Sunday to cruise to a three-second advantage after the 20-lap Final for another perfect score on the round. The podium was a repeat of Saturday with Christopher Mann (Ruthless / Kosmic) in second and Billy Cleavelin (RPG / Kosmic) in third. Ed Quinn (JHM / Exprit) showed good pace all weekend and kept things together to finish fourth as Samuel Porter (RaceLab / TB Kart) earned his first top-five finish of 2022. Carson Bowers (CompKart) swept the Senior ROK class in the same race group, outrunning Jonathan Neudorf (CompKart) while Tristan Young (VemmeKart) went unchallenged in the Acceleration Kart Racing Junior ROK category. 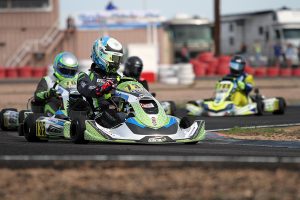 From last to first once again at PKRA for Ian Koentges in Masters 100cc (Photo: EKN)

Round Four was another epic battle in the P1 Engines Masters 100cc division with the lead group made up of six drivers for much of the race. Contact in the opening corners put Saturday winner Ian Koentges (FDM / CompKart) to the back of the field. It allowed David Pergande (JHM / Redspeed) to pace the early portion until the shuffling began. Top qualifier Preston Newberry (FDM / CompKart) was the first to work past Pergande, dropping him down to third. The Texan fought back with strong moves in turn three to get back into the lead. At the same time, Koentges had fought back up to second, and then fell to the tail of the lead group after some tough racing. He stepped up, and by lap 16, was back into the lead. That was the winning move as they fighting for second behind him continued, allowing Koentges to earn a fourth straight victory. Mike Weatherman (FDM / CompKart) came out in second with Pergande finishing third. Newberrry settled for fourth with Michael McDonald (FDM / CompKart) in the mix placing fifth. 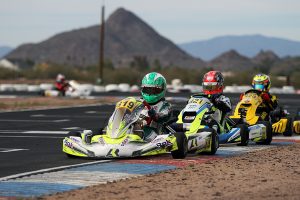 The Nash Motorsportz Junior 100cc class went down to the wire. Top qualifier Christian Cameron (AKR / Tony Kart) and Prefinal winner Cooper O’Clair (J3 / CompKart) were joined at the front by Round Two winner Preston Lambert (GFC / Trackmagic) and Tristan Young (VemmeKart). Cameron and O’Clair exchanged the lead multiple times over the 20 laps. O’Clair was leading on the final circuit with Cameron able to pull off a last for the victory, becoming the fourth different winner on the season. Lambert slipped by O’Clair for second with Young in fourth. AC Chartier (RPM / Tony Kart) completed the top-five. 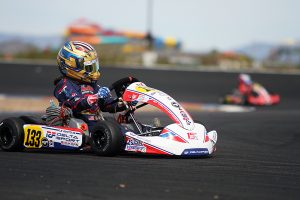 A perfect score in Round Four in Mini ROK for Gage Korn (Photo: EKN)

Gage Korn (Race Factory) had a similar performance to Round One on Sunday in the GFC Mini ROK class. Korn earned maximum points on the day with a sweep of the action, including fast time in the main event. It was he and two-time winner Ashton Woon (Parolin) that broke away from the rest of the field in the Final. Korn’s pace was better with each lap, pulling out to a four-second advantage by the second flag. Woon however was removed from the results for improper width. That moved the exciting fight for third up to second, which saw Killian Harris (Ruthless / Nitro) earn the spot over Kyle Drysdale (Ruthless / Nitro) with Matteo Quinto (RPM / Tony Kart) in fourth. Braylon Underwood put two Race Factory drivers inside the top-five. 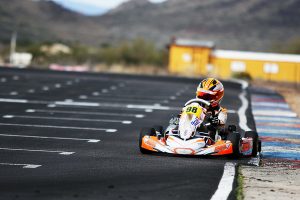 Cason Hodge picked up his fourth victory on the year in Micro ROK (Photo: EKN)

The VemmeKart Micro ROK class ran its main event separate from the Mini ROK group on Sunday. It was the same result with Cason Hodge (SSM / Exprit) putting in a perfect score for a fourth straight round. Hodge capped off the weekend with a 16-second advantage after 16 laps in the Final. The battle for second went down to the wire with Julian Sanchez (GFC) edging out Luca Popescu (Nash / EOS). Cam Becker (Race Factory) and Paxton Romero (FDM / CompKart) completed the top-five.

The Challenge of the Americas is set to close out the 2022 program on the March 25-27 weekend at the Sonoma Raceway in Sonoma, California. Rounds Five and Six will wrap up the 15th championship season in wine country, with EKN providing full Trackside Live coverage all weekend.