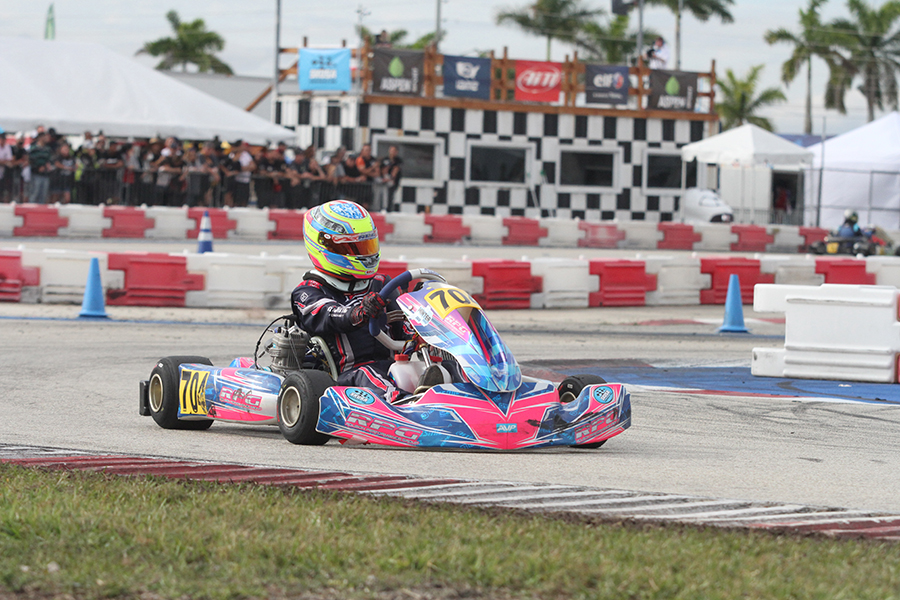 Several OTK USA race teams and competitors closed out the 2022 Superkarts! USA Winter Series with the final two rounds contested at the AMR Homestead-Miami Motorplex presented by MG Tires over the February 11-13 weekend. Weather was once again a factor at the Homestead, Florida facility, with rain adding an extra challenge for the final round on Sunday following picture perfect conditions on Saturday. The weekend marked the arrival of the 2022 models, including the new LN Racing Kart. OTK products were quick in both the dry and the wet, especially in the main events by securing 10 of the 18 victories along with 29 podium results, including three top-five sweeps. 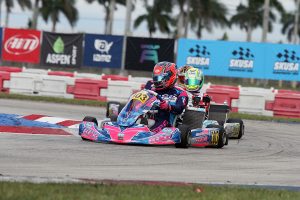 Ryan Norberg made his 2022 debut at the series finale, winning the Saturday main event in X30 Senior (Photo: eKartingNews.com)

Gafrarar won the opening battle of the weekend in the X30 Junior category. The race was ended early due to a red flag, with Caleb out front to be classified the winner. Michael Costello (Team Benik / Kosmic) was third with Christian Miles (Mike Doty Racing / LN) and two-time winner Sebastian Wheldon (JC Karting / LN) rounding out the top-five. An exciting last lap battle featured several OTK drivers fighting for the victory in the final round with Gafrarar escaping in the final corners for the victory. Wheldon was classified second, securing the class championship. Miles ended up in third ahead of British driver Brandon Carr (Team Benik / Kosmic), who led the majority of the race, ending up fourth in front of teammate Costello. 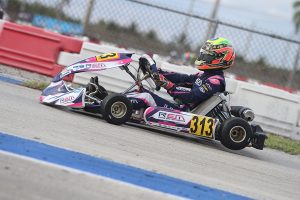 Diego Ramos grabbed the victory in X30 Senior in Round Four (Photo: eKartingNews.com)

Morgan was among the two different OTK winners in the KA100 Senior class. On Saturday, he was the provisional winner on-track until penalties dropped him to fourth place. That promoted fellow Senior rookie Collin Lloyd (T1D Racers / Tony Kart) to the top of the podium for his first win in the category while Gia Cicero (Rolison Performance Group / Kosmic) earned her first top-five result with a fifth-place effort. A wild last lap in the Sunday main event ended with Morgan classified as the winner, claiming his third of the series and the class championship. Jeremy Fletcher (GWR / Tony Kart) was second with Lloyd third and Cicero a career best finish of fourth. 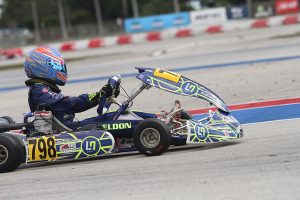 Sebastian Wheldon was among a few drivers to debut the new LN Racing Kart, securing the X30 Junior championship on the weekend (Photo: eKartingNews.com)

A double win weekend in X30 Master for OTK was led by Danillo Ramalho and Luis Schiavo. Ramalho (Racing Edge Motorsports / Kosmic) secured the victory in Round Three ahead of Schiavo (SVK / Exprit) and SKUSA Pro Tour champion Mario Barrios (Rolison Performance Group / Kosmic). Round One winner Michel Garrido (Alessandros Racing / Tony Kart) was fourth with Diego Rodriguez (Alessandros Racing / Kosmic) in fifth. Schiavo was able to better his position on Sunday, swapping the top spot with Ramalho for his first win of 2022. Barrios and Garrido held their ground in third and fourth. Ramalho would come away with the series championship with a string of four podium results.

Alan Isambard (International Motorsports / Tony Kart) helped to give OTK a championship in the Pro Shifter category. Isambard drove to two third-place results on the finale weekend, coupled with his victory and third-place finishes at the opening rounds put him at the top of the final championship standings. Also earning a championship on the weekend was Oliver Wheldon (JC Karting / Kosmic) in the Mini Swift division. Wheldon put in results of second and fifth at the series finale to join his two victories in the opening weekend to help claim the series championship.

In total, OTK drivers and teams earned seven of the nine class championships at the 2022 SKUSA Winter Series. 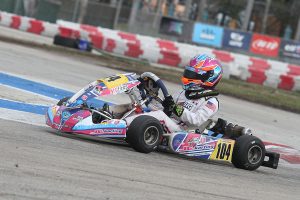 “This is a great way to start the year,” stated Luis Ruibal of OTK USA. “We finally have our new chassis landed in the USA and our staff at the warehouse in Orlando worked very hard to have so many units shipped in the last few days before the SKUSA weekend and for the upcoming major events across North America. This was also a very emotional weekend for us because of the passing of our great friend Jose Tito Zanella and we would like to dedicate all the wins to him.”

Superkarts! USA action resumes on April 1-3 with the launch of the 2022 SKUSA Pro Tour, beginning with the SKUSA WinterNationals set for the NOLA Motorsports Park in Avondale, Louisiana.