Second Success In A Row For Tony Kart 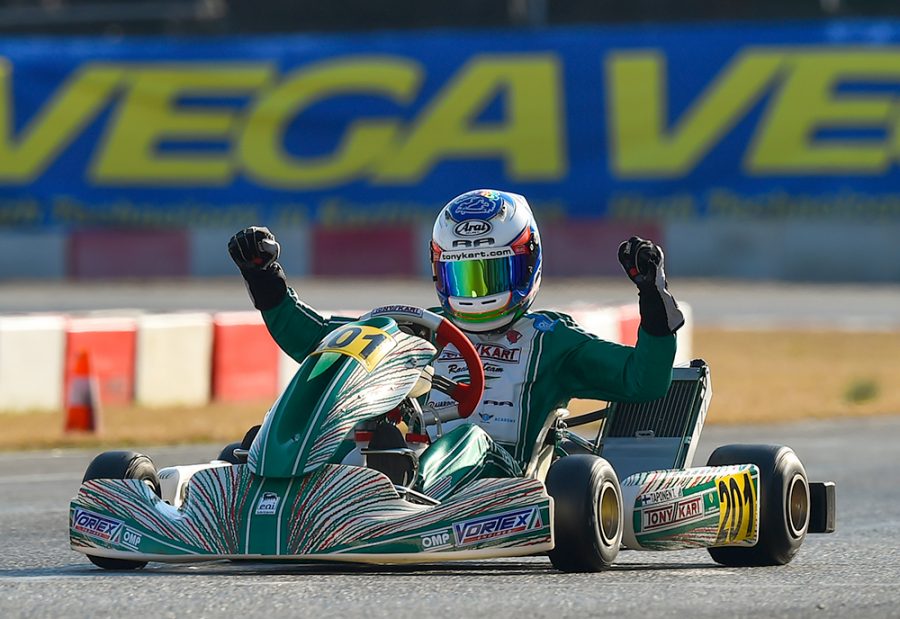 Our Racing Team is, once again, on the highest step of the podium in the OK class. This time it’s the reigning world champion Tuukka Taponen who gets the victory in the second round of the WSK Super Master Series in Lonato, with Luigi Coluccio third.

Two victories – out of two races – for Tony Kart at the WSK Super Master Series. Our Racing Team, on the occasion of the second round of the championship at the South Garda Karting of Lonato, is still among the protagonists and gains, in the OK category, a success and a third place in the Sunday final. This is a confirmation of the competitiveness of the new Tony Kart Racer 401 RR as well as of the DST engine of Vortex, the engine division of OTK Kart Group. The binomial “TonyKart-Vortex” stands out also in the KZ2 and OKJ classes, once more with the Racer 401 RR but this time powered by the RTZ/RSZ and DJT engines, while in the MINI class the “Racer” leaves space to the Tony Kart Rookiepowered by the MCX engine.

It is a really promising start of the championship, in OK class, for our drivers. Since the qualifying session, Luigi Coluccio, Tuukka Taponenand Joseph Turney are the contenders to the victory: the Italian driver set the best time in his group and gets the second position in the combined classification, while the Finnish and the British driver are among the first ten. At the end of the qualifying heats, with a total of four victories, four podiums and one fastest lap, our three drivers take the first three positions in the ranking. Results which are also confirmed in the two pre-finals: Taponen and Turney win their respective races, while Coluccio signs the best lap. In the final, Taponen “freezes” the race with an uncontested lead from the pole position and Coluccio conquers a positive third position, results that allow our two drivers to lead the championship ranking from the first two positions. A pity instead for Turney, which had to stop due to a collision with another competitor. Another concrete weekend for James Egozi, at his second ever race among the “Seniors”. The American driver, after the Top 5 recorded two weeks ago, makes his way during the final, climbs three positions and grabs the seventh position. Kuba Rajski makes his debut with our colours and grinds out precious kilometres in view of the next appointments of the calendar.

Our young OKJ drivers are also growing firmly. Starting from Jan Przyrowski, able to climb not less than 26 positions in the general ranking at the end of the qualifying heats, also thanks to some very good performances (among which a fast lap) and a third place, as the best result in the heats. The Polish driver even finishes second in the pre-final, before receiving a penalty for his front spoiler in the wrong position. Despite the misfortune, Przyrowski ends his weekend with a Top 10 in the final, in which his teammates Enzo Tarnvanichkul and Jimmy Helias also participate. Interesting performances for Alp Hasan Aksoy, Maria Germano Neto and Giacomo Pedrini at their second race with our Racing Team, where they gain further experience in the category.

In a competitive KZ2 class, with 93 entrants at the second round in Lonato, our drivers show their talent: Adrien Renaudin is sixth in the qualifying session and finishes three times on the podium in the qualifying heats, while Noah Milell and Juho Valtanen both set a fast lap during the heats. Good performances also from Jean and Samuel Luyet, able to climb the general ranking during the qualifying heats, as well as Simo Puhakka, unlucky only in the pre-final due to an early retirement. At his debut with the shifter karts, Alexander Gubenkomakes no mistakes and gradually improves his performance during the weekend. Laura Camps Torras’ apprenticeship also continues positively.

Also a large number of drivers attend the MINI class, with a record of 108 entries. Our two very young drivers Vladimir Ivannikov and Ethan Lennon don’t let themselves be frightened by their opponents and run good heats, especially the Russian who constantly finishes in the Top 10 and reaches the final on Sunday.

The Tony Kart Racing Team still stays in Italy for the next appointment of the season. In fact, from February 24th to 27th  February the Champions of the Future Winter Series will take place at the Franciacorta Karting Track, with the drivers of the KZ2, OK and OKJ categories on track.