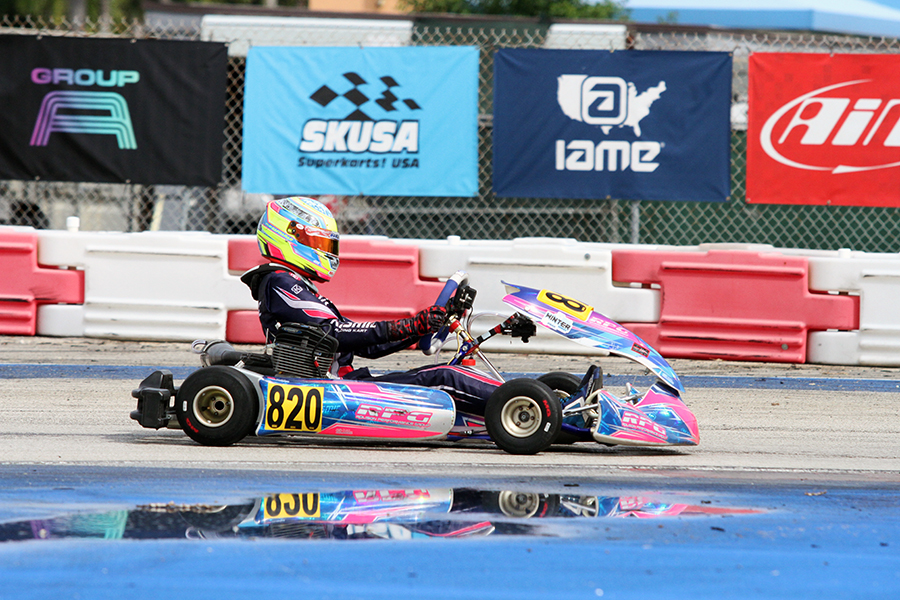 The 2022 Superkarts! USA Winter Series closed out on Sunday, February 13 at the AMR Homestead-Miami Motorplex presented by MG Tires. The fourth and final round was contested at the Homestead, Florida facility, which was delayed by lightning and heavy rain during warm-up. After grinding through qualifying, the Prefinals were shortened to catch up on the schedule. And by the main events, the sun was shinning for the last chance for drivers to battle for a win and the championships. Rolison Performance Group driver Caleb Gafrarar stole the show on the day and the weekend, earning victory in all four Junior categories. In the headline X30 Senior division, Brazilian Diego Ramos edged out fellow countryman Matheus Morgatto, who put together four straight runner-up results to claim the series championship. 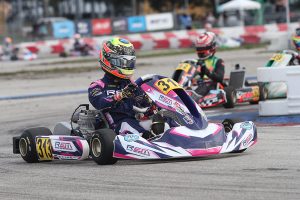 The Group A Apparel X30 Senior division began with only one driver dipping below the 1-minute mark in qualifying, thanks to PSL Karting / Birel ART driver Marijn Kremers. A lap of 59.814 cleared the 40-driver field by over three tenths. He would only complete four of the eight laps in the Prefinal as a broken reed stopped his engine from performing. In turn, Diego Ramos (REM / Kosmic) shined through on the drying track to earn the race win and pole position for the main event. Ramos jumped out to a solid lead at the start of the Final and eventually was caught by point leader Matheus Morgatto (AM / Exprit). Morgatto was into the lead by lap 11 and Ramos positioned himself on the his rear bumper. It was not until Lap 21 that Ramos made his move, grabbing the lead. Morgatto tried to regroup and make a pass, but was unable to complete the move. Ramos took the victory by one-second at the line – becoming the fourth different winner in the four rounds. Saturday winner and three-time defending champion Ryan Norberg (RPG / Kosmic) joined them on the podium in third with Round Two winner Alessandro de Tullio (Parolin USA) and Carson Morgan (RPM / Tony Kart) completing the top-five. 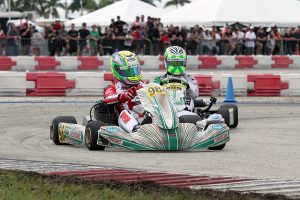 Carson Morgan was elevated to the victory in KA100 Senior, his third in the four rounds (Photo: EKN)

It was a wild day in the AM Engines KA100 Senior category, as expected after the first three rounds. Senior rookie Aden Rudolph (PSL / Birel ART) set fast time in qualifying but was shuffled back to eighth in the Prefinal, as Jeremy Fletcher (GWR / Tony Kart) was able to get away with the top spot after they battled behind him for position. The Final was a wild 22 laps, including the last lap. Fletcher and Carson Morgan (RPM / Tony Kart) established themselves as top drivers early on, until their fighting eventually allowed a host of others to join in on the party. One of the quickest drivers on track during the middle portion was Finnegan Bayliff (TKG / Kart Republic). Once he was there, he pushed Morgan away from the rest of the group. Then it was Rudolph that was charging forward as the quick kart, and made it a three-driver lead group. Bayliff stayed on the bumper of Morgan lap after lap, while Rudolph tried to push Bayliff past. On the final circuit, Morgan began running the defensive line. As they came out of turn 9 hairpin, they were three wide with Bayliff in the middle. Rudolph was lined up on the outside heading toward turn 10. Prior to the entry point, all three made contact with Bayliff the sandwich. The contact sent Morgan up and over Bayliff, with Rudolph inching away. They scrambled through the final corners with Rudolph reaching the line first ahead of Bayliff and Morgan. Fletcher was right there in fourth with Collin Lloyd (Tony Kart) in fifth. Rudolph was not only penalized five-seconds for contact with Gia Cicero (RPG / Kosmic), he also received another 10-seconds for reckless contact with Bayliff and Morgan. Add in three more seconds for a track limit violation, and he was classified 13th. That promoted series champion Morgan to the top of the podium for his third win. Bayliff was also penalized for the contact with Morgan, dropping him to sixth in the final order. Fletcher was promoted to second with Lloyd in third. Cicero ended up fourth with Nicholas Terlecki (FMS / Merlin) rounding out the top-five. 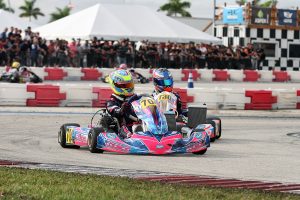 The only blemish on the day in the Team Benik KA100 Junior category for Caleb Gafrarar (RPG / Kosmic) was in qualifying. Round Two winner Steven Miller (CDR / EOS) edged out Gafrarar by 73 thousandths of a second in the wet session. Gafrarar drove away to a five-second win in the 8-lap Prefinal, and then dominated the 22-lap Final with a 17-second advantage to lock up the series championship. A great battle for second ended up with Miller advancing eight spots to second as Adam Brickley (TKG / Kart Republic) stood on the podium for the first time. Austin Jurs (FMS / Redspeed) was the hard charger, climbing up 23 spots to fourth after electrical issues put him out of the Prefinal. Ernesto Rivera (HRI / Tony Kart) completed the top-five. 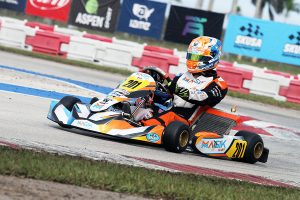 A strong start to the 2022 season for AJ Myers with back-to-back wins in Pro Shifter (Photo: EKN)

It was a battle for Gafrarar to get that fourth victory on the weekend with the main event in the SpeedLab Racing Engines X30 Junior class. Round One winner Sebastian Wheldon (JC / LN) came from the slow group in qualifying to set fast time in the wet, edging out British driver Brandon Carr (Benik / Kosmic) by 35 thousandths. It was Carr that shined in the Prefinal, with it being the first sessions drivers elected to go on dry MG Tires. One of them that stayed on rains was Gafrarar, as he held on to finish eighth on a drying track. Carr jumped out to the lead in the 22-lap Final, holding a solid advantage. That was until a charging Gafrarar was able to run him down and pass for the lea don lap 16. Carr stayed on his bumper until the final circuit, when they began fight for the victory. This allowed Max Garcia (TKG / WPK) to jump into the mix, dropping Gafrarar back to third early in the last lap. Gafrarar retook the position through the double left-hand corners, and set his sights on Carr. Coming to turn 11, Gafrarar dove to the inside of Carr, taking the position away and holding on to the checkered flag. Gafrarar nearly had the victory taken away for a pushback bumper penalty, however, the officials deemed it was not past the limit that would implicate a penalty. Wheldon was able to slip by on the run to the line for the second spot with Garcia following through in third. A five-second penalty for contact took Garcia off the podium, elevating Christian Miles (MDR / LN) to the third step. Carr ended up fourth with Michael Costello (Benik / Kosmic) in fifth. 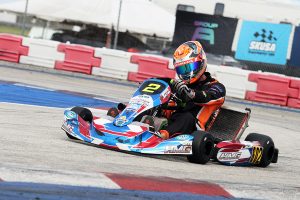 AJ Myers (Magik Kart USA) doubled up in the win column on the weekend in the PSL Karting Pro Shifter division. Myers was able to be quick in both the wet, semi-wet, and dry. After setting fast time in qualifying on a wet track, Myers was able to win the Prefinal on a drying track with rain tires. He then grabbed the holeshot in the 22-lap Final, holding off Formal through the opening corner and then driving away to a 11-second advantage at the checkered flag. Formal fell to nearly the tail end of the field in turn two of the opening lap, but fought back to end up second on-track, only to receive a pushback bumper penalty, dropping him to fourth. That promoted Billy Musgrave (Factory Kart) to second and put Alan Isambard in third, clinching the championship. Davide Greco (PSL / Birel ART) completed the top-five. 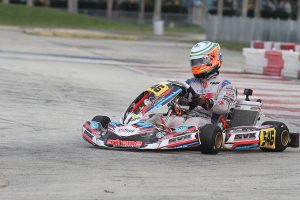 The Harden Motorsports Group Master Shifter class was won for a third time in four rounds by Scott ‘Skitchy’ Barnes (HMG / TB Kart). The Bermuda driver skipped out of the wet qualifying, but came back to win the Prefinal and then won the Final by over six seconds to clinch the series championship. Patrick Otto Madsen (ANSA / Formula K) drove to second with Scott Presti (VTM / TB Kart) in third. Robert Fiege (HMG / Race Factory) and Brandon Reed (HMG / CompKart) completed the top-five.

Luis Schiavo (SVK / Exprit) was able to sweep the final round of the Rolison Performance Group X30 Master division. Schiavo set fast time in qualifying, won the Prefinal and led every circuit of the 22-lap Final. He drove to a near two-second advantage over Danillo Ramalho (REM / Kosmic), who clinched the championship with his runner-up finish. Mario Barrios (RPG / Kosmic) joined them on the podium in third with Michel Garrido (Alessandros / Tony Kart) in fourth and Jure Gaspar (PSL / Birel ART) in fifth. 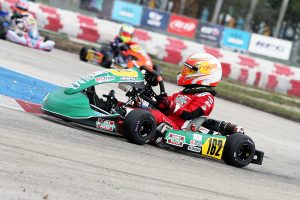 A two-driver battle decided the final round winner in the DNJ Intermodal Servies Mini Swift category. Prefinal winner Keelan Harvick (Harvick / Parolin) was joined at the front by Oliver Wheldon (JC / Kosmic), who qualified 12th, drove up to sixth in the Prefinal and was the quickest kart in the Final. Harvick led the entire distance of 19 laps, taking the white flag. With Wheldon now on his bumper, Harvick made a strange defensive move in turn two, and Wheldon slammed into the rear bumper. They continued with Wheldon slipping past for the lead in the final corners, taking the checkered flag as the provisional winner. A pushback bumper penalty of five-seconds took away the victory, dropping him down to fifth. That promoted Harvick to the top step of the podium for his second win of the weekend. Carson Weinberg (SCR / CRG) was elevated to the second position ahead of Salvador della Vecchia (SAR / Parolin) to third. Lucas Palacio (TKG / Kart Republic) advance up 14 positions to fourth for his best finish of the series. 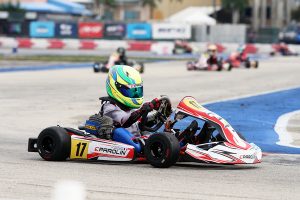 Alessandro Truchot (Parolin USA) was able to clinch a fourth straight victory in the Trinity Karting Group Micro Swift category to help stamp his name on the championship trophy. Truchot found himself in the 13th spot after a wet qualifying session but drove up to sixth in the Prefinal. It took only three laps to put himself into the lead during the Final, yet was challenged right away by Benja Fernandez (VM / Kart Republic). Eventually, Fernandez pulled off with a mechanical, which allowed to lead the last 13 laps of the 20-lap race for his fourth victory. Ashton Woon (Nitro Kart) set fast time in the race, driving from ninth to runner-up with Jaime Garcia (Parolin USA) up four spots to third. Drew Walz (Mottaz / Birel ART) was fourth with Alexander Procuna (FLC / Parolin) in the fifth spot.

The Superkarts! USA organization now turns its attention to the 13th season of the SKUSA Pro Tour, which begins with the WinterNationals at the NOLA Motorsports Park in Avondale, Louisiana on April 1-3.