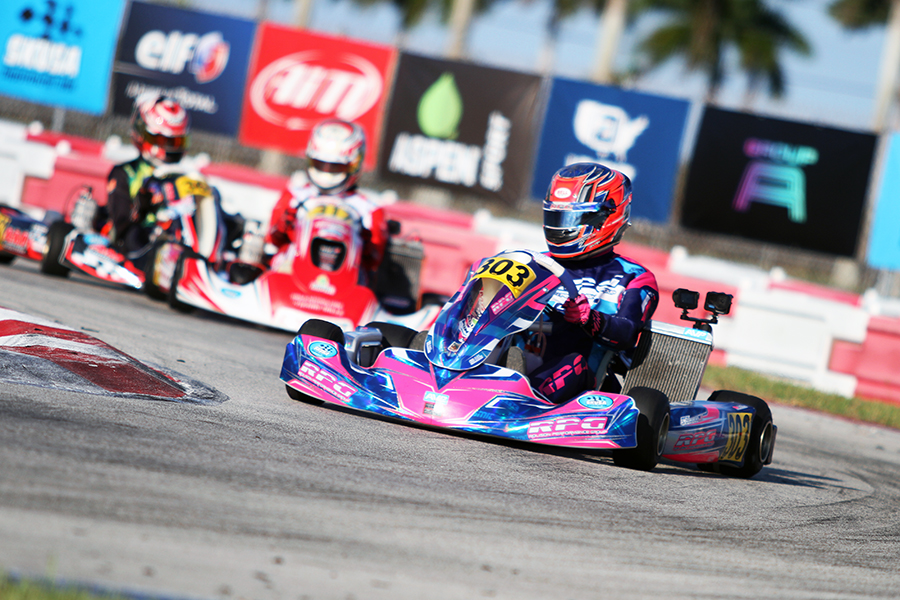 The penultimate round of the 2022 Superkarts! USA Winter Series was held at the AMR Homestead-Miami Motorplex presented by MG Tires on Saturday with perfect weather conditions all day long at the Homestead, Florida facility. The eight race groups with nine classes contested the third round of the championship program to open up the season. A number of drivers secured their first wins of the season while others added the to the short total of the year.

The Group A Apparel X30 Senior category went beyond the scheduled distance and was decided after the final checkered flag. Defending series champion Ryan Norberg (RPG / Kosmic) made his 2022 debut this weekend after sitting out the month of January. He was instantly into the mix after qualifying fourth as Senior rookie Carson Morgan (RPM / Tony Kart) set the pace with a 47.887-lap time. He fell back to third as championship leader Matheus Morgatto (AM / Exprit) and Norberg slipped through in the Prefinal. The main event was an early battle until Norberg secured the top position. While Morgatto was able to record fast lap of the race, he put the pressure on Norberg but was unable to make a move. Norberg crossed the line as the winner, however, was penalized for a jump start. A protest was filed, and it went in Norberg’s favor, restoring him as the winner and putting Morgatto back to second. Diego Ramos (REM / Kosmic) finished third with Marijn Kremers (PSL / Birel ART) classified fourth with defending SKUSA Pro Tour champion Hannah Greenemeier (RPG / Kosmic) dropped to fifth after a pushback bumper penalty. 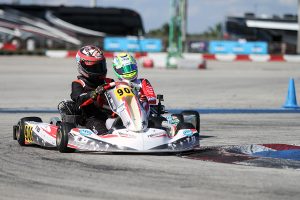 A wild last lap and penalties put Collin Lloyd on top of the podium in KA100 Senior (Photo: EKN)

Collin Lloyd (T1D / Tony Kart) was able to claim the win in the AM Engines KA100 Senior class to put together a sweep of the action in Round Three. Lloyd set fast time in qualifying and was able to come away with the win in the Prefinal. He and double race winner Carson Morgan (RPM / Tony Kart) got away from the rest of the field in the Final until their fight for the top spot brought in a host of others to challenge for the victory. Among them was Jeremy Fletcher (GWR / Tony Kart), who hooked up with Morgan to get to a little bit of the lead. On the final lap, their fight for the top spot brought back the others, with a wild last few corner played out. At the line, Morgan came across the line in first ahead of Fletcher, however, both were penalized for pushback bumpers with Fletcher also receiving a track limits penalty. That promoted Lloyd to the top step of the podium with Aden Rudolph (PSL / Birel ART) into the second spot and elevating Finnegan Bayliff (TKG / Kart Republic) to third after a three-wide finish at the line. Morgan ended up fourth with Gia Cicero (RPG / Kosmic) recording the fast lap of the race, improving seven spots to fifth in the final classification. 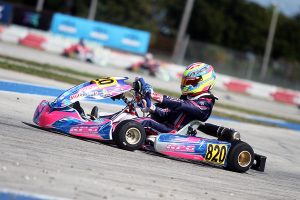 Caleb Gafrarar was able to double up in the Junior categories, winning both X30 Junior and KA100 Junior (Photo: EKN)

The Junior main events on the day were swept by Caleb Gafrarar (RPG / Kosmic). One of the few drivers doing double duty, he opened up the day with a near sweep in the Team Benik KA100 Junior class. After setting fast time in qualifying, he was penalized for scrubbing tires, which dropped him to second in the Prefinal after winning on track. He started the Final on the outside, and lost a few spots in the opening corners. Eventually, Gafrarar reclaimed the top spot and was able to drive away to an eight-second margin of victory. Prefinal winner Max Taylor (MDR / LN) won the battle for second ahead of Valentino Garbarino (MDR / Tony Kart). Luke Welcome (Orsolon / Tony Kart) was fourth and Diego Guiot (Supertune / Tony Kart) was fifth.

The SpeedLab Racing Engines X30 Junior category was controlled by British driver Brandon Carr (Benik / Kosmic) for nearly the entire day. Carr set fast time in qualifying and won the Prefinal. After the opening circuit, Carr’s rear bumper came disconnected from the kart, forcing him to receive the meatball flag and pull off. Without him, the fight for the lead featured five different drivers. Gafrarar was one of them, who took the lead early on but was shuffled back to fifth about the halfway point. From there, he quickly reclaimed the top spot and was leading the race when a red flag was brought out for a driver complaining of back pain after an incident. Officials were forced to call a red flag, cutting the race early and giving Gafrarar the victory. Max Garcia (TKG / WPK) ended up second with Michael Costello (Benik / Kosmic) on the podium in third. Christian Miles (MDR / LN) was fourth in his 2022 debut ahead of Round 1 winner Sebastian Wheldon (JC / LN). 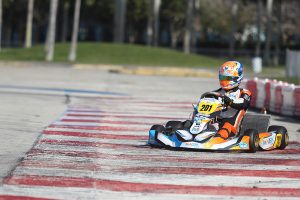 The PSL Karting Pro Shifter division welcomed Pro Tour champion AJ Myers (Magik Kart USA) back to the track, and returning to the top of the podium. Myers did not dominate as we saw for much of the 2021 season as Round Two winner Alan Isambard (IM / Tony Kart) set the pace through qualifying and strong battle in the Prefinal. Myers eventually found himself at the point in the Final with fast lap of the race, and drove away to a six-second advantage. Danny Formal (LEM / Formula K) drove to second ahead of Isambard. Billy Musgrave (Factory Kart) was right there throughout much of the race, slipping back to fourth with Davide Greco (PSL / Birel ART) ending up in fifth. 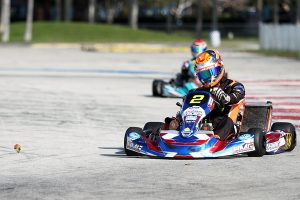 The Harden Motorsports Group Master Shifter was a sweep, completed by point leader Scott ‘Skitchy’ Barnes (HMG / TB Kart). Barnes was able to hold the top spot throughout the day, yet challenged in every session. In the Final, Patrick Otto Madsen (ANSA / Formula K) put on the heat, however, was unable to make any move on Barnes for the top position. Barnes took his second win of the series while Madsen recorded fast lap. Scott Presti (VTM / TB Kart) joined them on the podium in third as Robert Fiege (HMG / Race Factory) and Ken Schilling (HMG / Aluminos) completed the top-five. 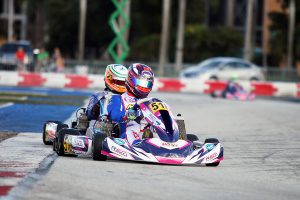 It was a great duel in the Rolison Performance Group X30 Master class throughout the day between Round Two winner Danillo Ramalho (REM / Kosmic) and Luis Schiavo (SVK / Exprit). Ramalho held the upper hand throughout the day and was able to record a sweep of the action. Schiavo led a few times in the Final, but Ramalho would answer. It was not a perfect score, as Schiavo took the fast lap honors in the main event. Pro Tour champion Mario Barrios (RPG / Kosmic) was third with championship leader Michel Garrido (Alessandros / Tony Kart) in fourth. Diego Rodriguez (Alessandros / Tony Kart) completed the top-five. 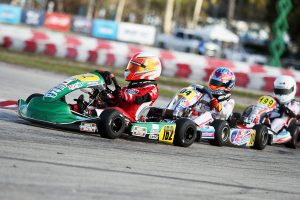 Keelan Harvick (Harvick / Parolin) was able to notch his first DNJ Intermodal Services Mini Swift victory. The day looked to belong to Kai Johnson (PSA / Energy) after setting fast time in qualifying and showing the way through the Prefinal. At the start of the Final, Johnson was shuffled back to fourth with the top three of Harvick, Oliver Wheldon (JC / Kosmic) and Tyler Roberts (Parolin USA) working together to get away from the rest of the field. Harvick started fourth and was into the lead by lap two. From there, he led the remainder of the 18-lap race to claim the victory. Wheldon put the pressure on, yet the double winner and point leader was unable to make a move for the lead. Roberts sat comfortable in third, completing the podium. Johnson led a train of drivers in fourth, just ahead of Mini rookie Lucas Palacio (TKG / Kart Republic). 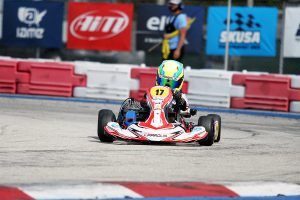 A third straight win in three rounds of competition for Alessandro Truchot (Parolin USA) in the Trinity Karting Group Micro Swift. It was not a perfect score as Truchot had pulled off in the opening two rounds as he qualified third behind fast time driver Benja Fernandez (VM / Kart Republic). Truchot found his way to the point in the Prefinal for the win, and then led all 20 laps of the Final to score his third victory. Ashton Woon (Nitro Kart) was the top challenger in both races, earning his best finish of the series thus far. Fernandez completed the podium in the Final, placing third ahead of Drew Walz (Mottaz / Birel ART) with Rocco Simone (Parolin USA) in fifth.

The final round of action for the 2022 SKUSA Winter Series will take place on Sunday, February 13, deciding this year’s champions to close out the fifth season of the program. Stay tuned to EKN Social Media outlets for updates, results, photos and videos all day.