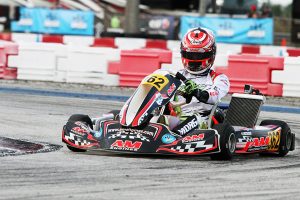 The 7/10-mile circuit has undergone some updates in recent weeks, including new curbing and exit sections revised. Following the counter-clockwise direction for January, the clockwise direction will be utilized for this weekend’s events. Wednesday and Thursday are unofficial practice with Friday hosting five official sessions for testing. Round Three is set for Saturday, including qualifying, Prefinal and Final. Round Four is a repeat format on Sunday.

What is considered to be the ‘Spring Training’ for the upcoming season, the SKUSA Winter Series is the opportunity for select drivers either graduating up a division, or finding a new home to work out the kinks and get ready for the busy summer schedule. Entries were higher than the last year for the opening event in January with 220 entries in the nine categories. This weekend, we enter the weekend with 210 pre-registered for the final two rounds of racing.

A near 40 driver field will battle in Homestead for the final two rounds of the X30 Senior category. Leading the championship is Brazilian Matheus Morgatto (IR / Exprit) after finishing runner-up in both Final in January. Morgatto holds a 111-point advantage over fellow Brazilian Diego Ramos (REM / Kosmic) had a best result of fourth in Round Two. 2021 SKUSA Pro Tour champion Hannah Greenemeier (RPG / Kosmic) is third with Canadian Thomas Nepveu (TKG / Kart Republic) now in fourth with Round One winner Edoardo Ludovico Villa (SCR / TB Kart) not returning. Round Two winner Alessandro de Tullio (Parolin USA) was the provisional winner in Round One, but was removed following tech. He sits now fifth in the standings, however, needs to count the DQ points toward the championship. Joining the mix and making their 2022 debuts are four-time SKUSA Pro Tour champion Ryan Norberg (RPG / Kosmic) and Marjin Kremers (PSL / Birel ART). Norberg – the three-time series champ – was on the sidelines for January, and jumping back behind the wheel. Kremers is returning to the USA after finishing runner-up for a third time in the KZ category at the SuperNationals in December. 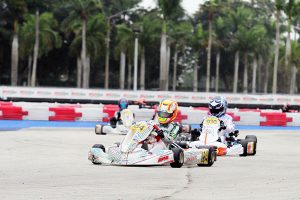 Carson Morgan is the driver to beat in KA100 Senior with two wins on his resume for 2022 (Photo: EKN)

The KA100 division was among the categories that saw one driver double up in the win column in January. Six-time SKUSA Pro Tour champion Carson Morgan (RPM / Tony Kart) has two wins to begin his Senior rookie season, holding a 128-point advantage over fellow Senior rookies Aden Rudolph (PSL / Birel ART) who landed on the podium both rounds. Top qualifier for Round One Nicholas Terlecki (FMS / Merlin) sits third with another Senior rookie – Jeremy Fletcher (GWR / Tony Kart) in fourth after some issues Round One.

The shifterkart divisions is seeing an influx of drivers for the second event of the SKUSA Winter Series. The Pro Shifter class saw two drivers win back in January. Four-time SKUSA SuperNationals winner Billy Musgrave (Factory Karts) and Alan Isambard (IM / Tony Kart) came out as winners with Isambard leading the championship by 15 points. Slavik Putiatin (PSL / CL) and Giano Taurino (Magik Kart USA) are within 100 points of Isambard, but not on the entry list. Making it interesting is the arrival of defending Pro Tour champion AJ Myers (Magik Kart USA) and – yet not on the entry list but confirmed – the three-time SKUSA SuperNationals winner Danny Formal (LEM / Formula K). 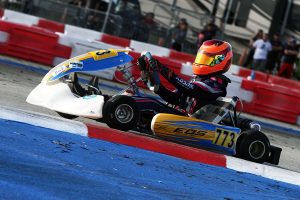 A fight for the championship down to the wire is brewing in the X30 Master class. Michel Garrido (AR / Tony Kart) and Danillo Ramalho (REM / Kosmic) split the victories from January, providing Garrido with a 22-point lead at the halfway mark. SKUSA Pro Tour champion Mario Barrios (RPG / Kosmic) sits third with Luis Schiavo (SVK / Exprit) fourth, all within 80 points heading into the finale weekend.

Four drivers sit within 34 points in the X30 Junior championship heading into the series finale. Sebastian Wheldon (JC / Kosmic) and Steven Miller (CDR / EOS) left the opening weekend with victories, as Miller enters the final two rounds as the point leader by 30 points. Matias Orjuela (Parolin USA) and Max Garcia (TKG / WPK) are within 34 points to Miller. Orjuela will not be in Homestead, competing in the WSK Super Master Series event in Italy. That will leave just three fighting it out for the title. An event-high 39 drivers however make up the field, with a number that should be in the hunt for wins or podium finishes. That includes Canadian Ayden Ingratta (SCR / Redspeed) – who was one corner away from winning in Round One – Caleb Gafrarar (RPG / Kosmic) and Christian Miles (MDR / LN Kart) set to make his 2022 debut. 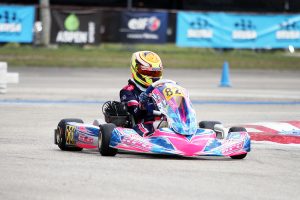 Gafrarar is doing the double at the SKUSA Winter Series, also competing in the KA100 Junior division. He was able to come away with the victory in Round One with Steven Miller (CDR / EOS) earning two wins in the Sunday action back in January. Gafrarar leads the championship standings by just 10 points over double podium finisher Austin Jurs (FMS / Redspeed). Luke Welcome (VM / Tony Kart) was runner-up to Miller and sits third with double top-five finisher Valentino Garbarino (RPM / Tony Kart) in fourth. Miller finds himself in fifth the standings, 120 points back after missing the Round One Prefinal yet driving to a P4 result in the Final. Making their 2022 debuts on the weekend include Ava Hanssen (FMS / Merlin) and Aryton Grim (CRP / OTK), both graduating to the Junior ranks.

The third largest class of the weekend at 34 drivers is the Mini Swift category, which features another double race winner from January leading the championship. Oliver Wheldon (JC / Kosmic) was the double winner last month, one earned on track and the second due to penalties. That gives the younger Wheldon brother a 167-point lead heading into the weekend. Kai Johnson sits second in the standings, not yet entered for the weekend. Keelan Harivck (Harvick / Nitro Kart) was the provisional winner on Sunday until a penalty for contact dropped him off the top of the podium. He sits third in the standings, out by 171 points with Round One runner-up Carson Weinberg (SCR / CRG) in fourth, needing a lot of help to get back into the chase. Fifth is Salvador della Vecchia (SAR / Parolin), who was among the quickest all weekend, just unable to land on the podium in either round. One driver to watch for making his 2022 debut is Isaac Malcuit (AKT / Kart Republic), who stood on the podium last year in Micro. 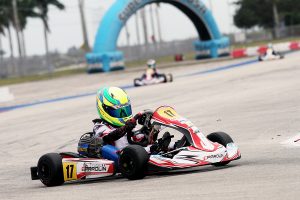 All five of the top drivers in the Micro Swift championship chase will be in Homestead for the second weekend. Every was chasing Alessandro Truchot (Parolin USA) both rounds, as he put in a perfect two days of racing to establish a 135-point advantage heading into the series finale. Canadian Rocco Simone (Parolin USA) is second, holding a five point lead over Benja Fernandez (AKT / Kart Republic). Ashton Woon (Nitro Kart) is fourth, coming off a victory on the west coast at Challenge of the Americas. Cameron Marsha (Nitro Kart) is fifth in the standings.

Be sure to follow eKartingNews all weekend long for daily reports on the site, along with social media updates, photos, videos and more from the AMR Homestead-Miami Motorplex presented by MG Tires for the final two rounds of the 2022 Superkarts! USA Winter Series.