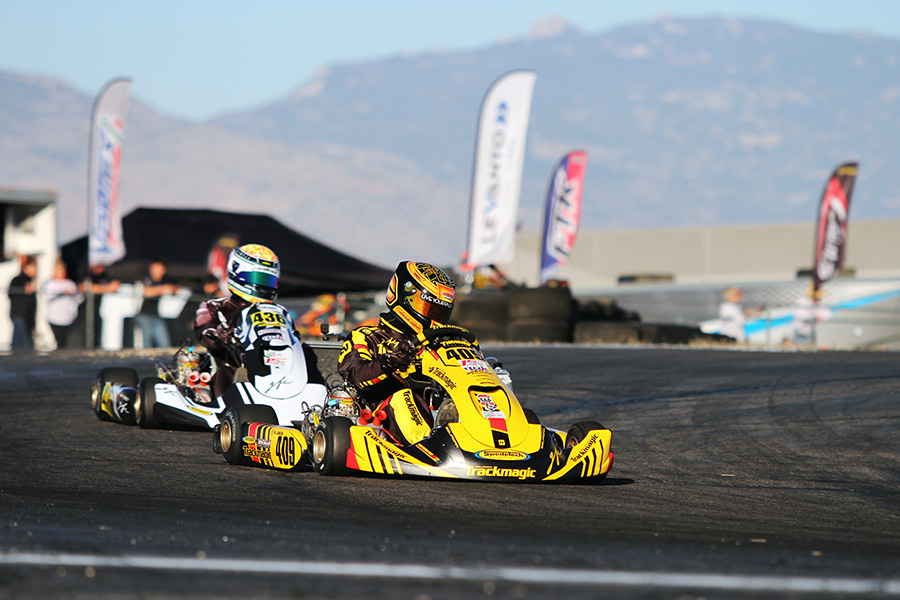 The 2022 season of karting has opened up on the west coast with Challenge of the Americas hosting their opening two rounds of competition at the Musselman Honda Circuit in Tucson, Arizona. Round Two was completed on Sunday, with the picture perfect day of weather following two long days of strong winds making it feel like the winter weather along the east coast. This weekend was the largest gathering for the Challenge in Tucson, featuring 132 entries over the nine categories, and over to full rounds of competition, saw zero red flag incidents. A number of drivers garnered two victories on the weekend to begin the championship chase as the driver to beat.

Among those earning two wins on the weekend was defending SwedeTech Racing Engines ROK Shifter champion Kyle Wick. Wick (GFC / Trackmagic) began where he left off by setting fast time in qualifying, posting a 47.779-second lap. He then fought off former series champion Hunter Pickett (GFC) for the win in the Prefinal. Pickett grabbed the holeshot to open up the 20-lap Final with Wick slotting in behind. Wick made his move on lap 10, and from there, was able to drive to a second victory on the weekend. On lap 19, the battle for third heated up with Ryan Martin (RWR / CRG) and Jacob Gulick (GFC) making contact on the exit of turn five. They pushed off the track, allowing Worawong Komaracul (GFC) to move up to the podium in third with Micah Hendricks (Croc Promotion) in fourth. Ron White (RWR / CRG) was involved in contact in the Prefinal, and charged from the back of the field to end up fifth. 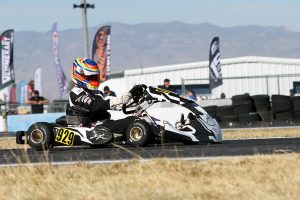 Two wins over the weekend in Senior 100cc for Jake Drew (Photo: EKN)

The Forward Direction Motorsports Senior 100cc division also welcomed a double race winner. It was not a perfect score for Saturday winner Jake Drew (GFC) on Sunday, as Cole Schroeder (RPM / Tony Kart) edge him out for the fast time in the session by just one thousandths. That was the only blemish on his Sunday record, leading wire-to-wire in both the Prefinal and Final to open 2022 as the championship leader. Ryan Vincent (Nash / EOS) charged forward early to grab second. Kyriakos Sioukas (AKR / EOS) was third with fast lap of the race ahead of teammate Jacob Hoover while Liam Letzsch (GFC) fell from second to fifth in the 20-lap Final. 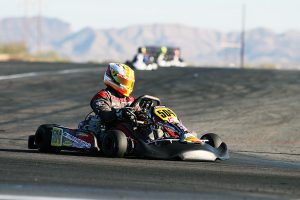 Jimmy McNeil enjoyed a second victory in ROK Shifter Masters in his return to the series (Photo: EKN)

The Ron White Racing ROK Shifter Masters class welcomed a double winner as well, thanks to the performance of Jimmy McNeil (TV / Aluminos). Defending series champion Kevin Woods (RWR / CRG) came out with fast time in qualifying and won the Prefinal. He was unable to grab the holeshot, slipping to third at the start of the Final. Both Nick George (TV / Aluminos) and McNeil were able to blast out ahead. George led the opening circuit until McNeil took over. From there, McNeil led the remaining 19 laps to claim his second victory of the weekend. Woods was able to work past George for the runner-up spot, posting fast lap of the race on the final circuit. Jonathan Vitolo (GFC / Trackmagic) was in the lead group, finishing fourth with Fernando Diaz (GFC) placing fifth in his return to the track. 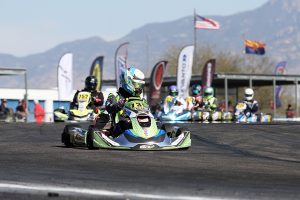 Ian Koentges doubled up in the win column in Masters 100cc (Photo: EKN)

A perfect score was broken up early in the P1 Engines Masters 100cc division. Saturday winner Ian Koentges (FDM / CompKart) found himself in third after qualifying with Preston Newberry (FDM / CompKart) and Mike Weatherman (FDM / CompKart) clocking in quicker times during the session. After mid-race contact, Koentges came away from the Prefinal as the race winner. Starting from the pole position for the Final, Koentges was able to get away as they fought for second behind him, leading all 20 laps and driving to a 2.8-second advantage. Weatherman was able to come away with the second position with David Pergande (JH / Redspeed) joining them on the podium in third. Newberry and Brett Harrelson (Nash / EOS) completed the top-five. 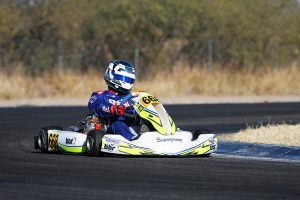 Derek Wang (FTK / EOS) went perfect on the weekend to begin his quest for a fourth straight championship in the Odenthal Racing Products Masters ROK division. Wang went unchallenged throughout Sunday for a second victory on the weekend, driving away to a 4.9-second advantage in the main event. Billy Cleavelin (RPG / Kosmic) was able to land on the podium with a runner-up, holding off Christopher Mann (Ruthless / Kosmic) for the entire distance. David Pergande (JH / Tony Kart) was fourth with Mike Giles (JH / Kart Republic) placing fifth. Tristan Young (VemmeKart) was the lone driver in the Acceleration Kart Racing Junior ROK division in the same race group. 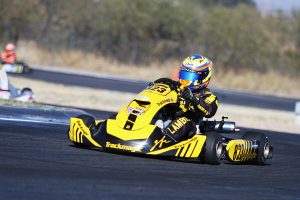 The Nash Motorsportz Junior 100cc main event was one of the most dramatic races of the weekend. The lead group in the final did not include top qualifier and Prefinal winner Christian Cameron (AKR / Tony Kart) was shuffled back to the second group early. Up front was a number of lead changes that included Alexander Gonzalez (Nash / EOS), Cooper O’Clair (J3 / CompKart), and Parker DeLong (Tony Kart). Delong was able to put himself into the lead with two laps to go. In the run to the white flag, Preston Lambert (GFC / Trackmagic) – who started eighth – was into second behind DeLong. Heading into turn four, DeLong went on the defense, holding the inside line. Lambert went for the gamble, and stood his ground on the outside and made it hold, escaping with the lead. DeLong then came under attack after the white flag, allowing Lambert to grab enough space to cruise to the checkered flag, earning his first series victory. DeLong held on for second with a wild last lap, last corner fight for third. Contact involving Stephen Eisert (SSM / Exprit) and John Antonino (Race Factory) shuffled up the order. Gonzalez came across the line in third ahead of O’Clair and Cameron. 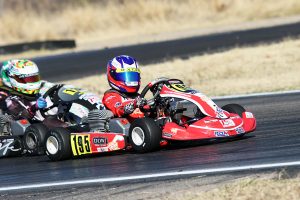 Another great race was produced in the GFC Karting Mini ROK main event. Saturday victor and Prefinal winner Gage Korn (Race Factory) was out front in the Final early until a broken rear bumper brough out the meatball flag, ending his race early. That trigger a great fight between five drivers for the lead, including six different lead changes. The last exchange for the top spot was Ashton Woon (Parolin) taking the spot. He was able to break away on the last lap to secure his first series victory in the category. Matteo Quinto (RPM / Tony Kart) came away with the second spot in the final last lap battle ahead of Braylon Underwood (Race Factory). Top qualifier Turner Brown (GFC) ended up fourth with Jaxon Porter (Benik) in fifth. 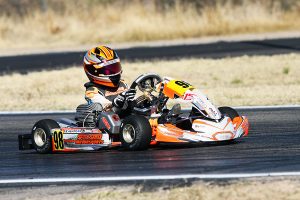 The weekend was all Cason Hodge (SSM / Exprit) in the VemmeKart Micro ROK division. Hodge ran near the lead group of the Mini class throughout the main event, finishing fifth overall in the race group to sweep the Micro class on the weekend. Luca Popescu (Nash / EOS) was second with Sloan Dozois (CompKart) in third after Julian Sanchez (GFC) had to pull off early with a broken fairing that blocked his vision.

The 15th anniversary season for Challenge of the Americas continues a month from now, with the Phoenix Kart Racing Association hosting Round Three and Four of the championship program. Teams and competitors will gather on the February 25-27 in Glendale, Arizona. EKN will be trackside for the LIVE broadcast along with updates, results and images on social media.