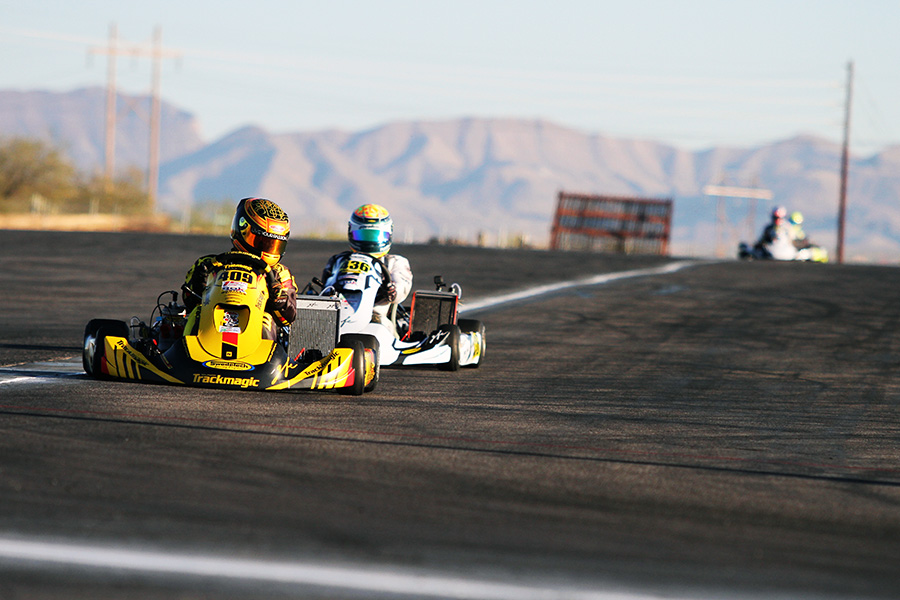 Kyle Wick opens his title defense in ROK Shifter with a victory in Round One (Photo: EKN)

The 15th season for Challenge of the Americas began on Saturday with the opening round of competition completed at the Musselman Honda Circuit in Tucson, Arizona. Weather was a key factor in not only on Friday practice, but for much of the day on Saturday with strong winds making it feel as if everyone was in the northern hemisphere. Thankfully, the sun shine both days, and by the end of the main events to complete Round One, the winds were less of a factor. Nine drivers opened up the 2022 season with a victory on the opening day of the series, including GFC Karting drivers of Kyle Wick and Jake Drew in the top two Senior categories.

2021 ROK Shifter champion Kyle Wick (GFC / Trackmagic) put in a perfect day to open up his title defense. Wick was able to sweep the action on Round One, leading the way from qualifying and through the Prefinal and Final by leading ever lap of competition. Wick jumped out to the lead in the Final, and joined at the front by former series champion Hunter Pickett (GFC). Pickett suffered mechanical issues that put him last in the 19-driver field for the Prefinal. He fought up to fourth and was into second by the end of the opening lap. Unable to make a move for the lead, it was Wick-Pickett that ran 1-2 the entire 20-lap Final. Jacob Gulick was able to make it a GFC 1-2-3 finish, working past Kyriakos Sioukas (AKR / EOS) for the third spot. Canadian Ryan Martin (RWR / CRG) completed the top-five (updated following results updated Sunday morning). 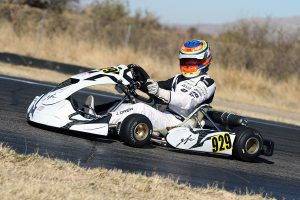 Jake Drew overcame issues in qualifying to drive from the tail of the field in the Prefinal and come away with the win in the Final (Photo: EKN)

It was zero to hero for Jake Drew (GFC) in the Forward Direction Motorsports Senior 100cc category. After setting fast time in the qualifying session, Drew was removed from the results for a tech infraction. That put him 22nd on the grid of the Prefinal, putting Kyriakos Sioukas (AKR / EOS) on the pole position for the Prefinal. Drew was able to work his way up to the seventh spot in the 14-lap Prefinal with Jacob Hoover (AKR / EOS) taking the close win. Drew continued his charge forward in the Final, working up to the lead quickly. He was challenged by Josh Campbell (RPM / Tony Kart) in the second half of the race. Eventually, Drew established himself as the driver to beat, pulling out to a 1.8-second advantage at the checkered flag for the victory. Sioukas was able to win the fight for second ahead of Hoover, with Liam Letzsch (GFC) classified fourth and Cole Schroeder (RPM / Tony Kart) fifth after a three position penalty to Ryan Vincent (Nash / EOS) for contact on the final lap with Josh Campbell (RPM / Tony Kart) – who finished seventh. 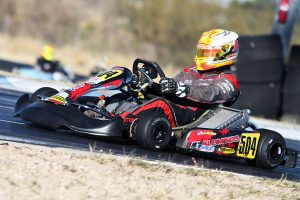 Contact decided the outcome of the main event in the Ron White Racing ROK Shifter Masters class. Defending series champion Kevin Woods (RWR / CRG) had a stranglehold on the class through qualifying and the Prefinal. Others closed in in the Final, including Cliff Kujala (Pure / Tony Kart) and Jimmy McNeil (TV / Aluminos). On lap nine, Kujala made a move on Woods at turn four, and the two made contact. Woods went up and over Kujala, and off the track. Kujala continued, but McNeil slipped past both. That was the winning move as McNeil took the victory by over three seconds. Nick George (TV / Aluminos) was able to beat out Kujala for second with Jonathan Vitolo (GFC / Trackmagic) in fourth and Fernando Diaz (GFC) in fifth. 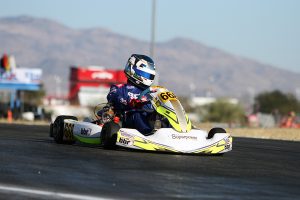 Derek Wang put in a perfect score on the day in the Odenthal Racing Products Masters ROK division. Wang (FTK / EOS) was able to sweep the action and score maximum points in the opening round of his title defense, going for four straight championships. Contact on lap two in turn one between Billy Cleavelin (RPG / Kosmic), Paul Bonilla (JH / Redspeed) and David Pergande (JH / Tony Kart) gave Wang a big lead early on. He drove away to an 11-second advantage with Christopher Mann (Ruthless / Kosmic) slipping up to second. Bonilla fought back to finish third after the contact with Cleavelin up to fourth. He was penalized three positions for the incident in turn one, that promoted Mike Giles (JH / Kart Republic) to fourth and Luke Tracy (VemmeKart) to fifth. 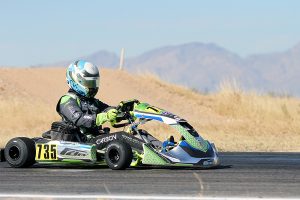 Ian Koentges came out of the opening battle of the day to win his first in Masters 100cc (Photo: EKN)

A good battle opened up the main events on the day with the P1 Engines Masters 100cc category. David Pergande (JH / Redspeed) jumped out to the lead over top qualifier and Prefinal winner Ian Koentges (FDM / CompKart). Pergande was able to fend him off for much of the race, until lap 15 when Koentges took back the position. Pergande was pressured behind him for the second spot, allowing Koentges to get away for the victory by four tenths of a second. Brett Harrelson (Nash / EOS) put in fast lap of the race in finishing third behind Pergande with Mike Weatherman (FDM / CompKart) ending up fourth after running in the lead group for much of the race. Preston Newberry (FDM / CompKart) completed the top-five. 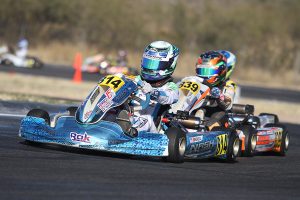 The Nash Motorsportz Junior 100cc class is the largest of the weekend at 28 drivers, providing some great action for the opening round. Charlie Smith (Nash / EOS) set fast time in qualifying with Stephen Eisert (SSM / Exprit) winning the Prefinal. They were among the many in the lead pack early until three drivers broke away, including Eisert, Alexander Gonzalez (Nash / EOS), and Parker DeLong (RPM / Tony Kart). Eisert led but was shuffled back to third by the white flag. Gonzalez was leading the way with DeLong putting on the pressure. On the last lap, the two made contact in turn 5, pushing wide. This allowed Eisert to nearly slip past both, but only Gonzalez. Making the run down the long back straight, DeLong defended, yet not enough as Eisert nearly slipped underneath. He was unable to hang on to the kart going into the corner, drifting wide and off the track. Gonzalez was able to pull up alongside DeLong in a drag race to the line, crossing ahead for the victory by just 25 thousandths of a second. DeLong however would be penalized for the contact on the last lap, dropping him down to fifth in the final order, moving Cooper O’Clair (J3 / CompKart) up to second and Tristan Young (VemmeKart) to third. Young also ran uncontested in the Acceleration Kart Racing Senior ROK class to earn two podium finishes on the day. Christian Cameron (AKR / Tony Kart) drove to fourth, classified ahead of DeLong. 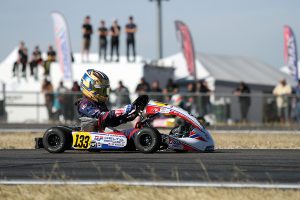 The GFC Karting Mini ROK division features 18 drivers on the weekend, with a number of young pilots looking to establish a strong start to the season. Gage Korn (Race Factory) did that with a victory on Saturday. Nico Sarphati (GFC) was the top qualifier with Korn earning the win in the Prefinal. He was joined at the front in the Final by Matteo Quinto (RPM / Tony Kart) and Turner Brown (GFC). Quinto led the majority of the Final until Korn took the spot at the white flag. Korn held on through the final circuit, reaching the checkered flag first with Brown able to slip ahead of Quinto. Ashton Woon (Parolin) drove to fourth with 2021 Micro champion Jaxon Porter (Benik) placing fifth. 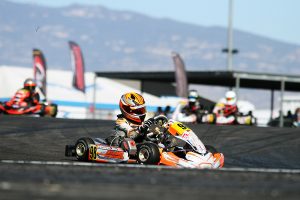 The VemmeKart Micro ROK class was dominated by Cason Hodge (SSM / Exprit). Hodge swept the day, putting in a perfect score to start off the championship chase. The Final was a wire-to-wire win, driving away to a 19-second advantage. Luca Popescu (Nash / EOS) and Julian Sanchez (GFC) joined him on the podium with Sloan Dozois (CompKart) in fourth.

Sunday is the second round of competition at the Musselman Honda Circuit as Challenge of the Americas completes its opening weekend of the 2022 season, celebrating its 15th year. Tune in to the EKN Live broadcast all day and watch for updates, photos and videos on the EKN Social Media.