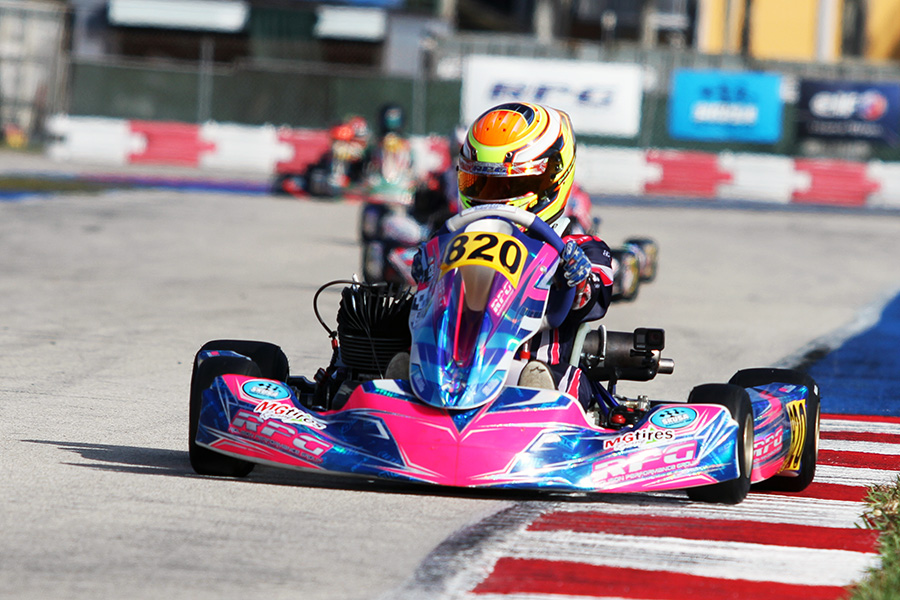 Caleb Gafrarar drove to victory aboard his RPG Kosmic in the KA100 Junior division (Photo: eKartingNews.com)

The 2022 karting season has begun and, less than a full week into the new year, Rolison Performance Group was trackside for its first event. Less than a month from putting the 2021 season to bed at the SKUSA SuperNationals, the OTK USA race team is all-in on the new year. The SKUSA Winter Series opened on the January 7-9 weekend at the AMR Homestead-Miami Motorplex presented by MG Tires outside Miami, Florida, and the Rolison team was front-and-center. RPG welcomed 13 drivers to compete in six divisions at the 7/10-mile circuit, bringing home multiple podium finishes and their first victory of the 2022 season. 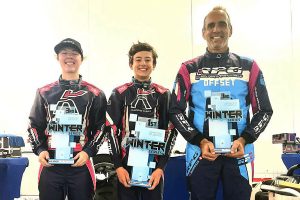 “I’m extremely excited about the 2022 season and happy to get it underway,” offered team owner Mike Rolison. “We want to welcome all the racers who are new to our program, and welcome back those who have been with us for years. I want to thank our staff and their families for all they give to our program. I can’t wait to get back to Homestead in February to keep building momentum for this year’s effort.”

The opening round on Saturday saw three drivers stand on the podium during the awards ceremony at the end of the day. KA100 Junior driver Caleb Gafrarar, who joined the team in the late stages of 2021, was one of the quickest drivers in the category all weekend. He set fast time on a drying track with slick tires on Saturday, clearing the field by two seconds. After narrowly losing the Prefinal at the line, Gafrarar struck back in the Final to lead the final 14 laps of the race to win by a two-second advantage. A rain shower dampened the drivers just as the field was leaving for the main event on Sunday, with Gafrarar starting second. Caleb was able to lead the opening four laps until slipping back to the fourth spot by the checkered flag. Gafrarar now leads the championship points heading to the finale in February.

Top qualifier Mario Barrios was the lone RPG driver in the X30 Master class. The 2021 SKUSA Pro Tour champion set the benchmark for Saturday’s round of racing, before a heated Prefinal dropped him to second. Another hard-fought race in the Final led to Barrios picking up his first podium of the 2022 season in the third position. Qualifying the next day saw the track drying that made tire selection a key, as Barrios missed out and ended up fifth. He gained one position in the Prefinal and another in the Final to finish third once again, setting up for a competitive fight for the championship next month. 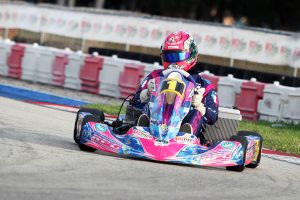 Defending SKUSA Pro Tour X30 Senior champion Hannah Greenemeier led the RPG squad along with three others. The Colorado driver battled back from a tough qualifying and Prefinal, coming from 13th on the grid for the Final to end up third for her first podium of 2022. It was a better start to Sunday, qualifying eighth before finishing seventh in the Prefinal. The main event was a battle all 22 laps until Greenemeier was able to break away from a pack with the fifth position, putting her in the title chase with two top-five results. Florida driver Paul Bocuse, making his Senior debut at the series, put together two top-10 finishes at his home track. Bocuse finished 10th on Saturday and improved to seventh on Sunday. Fellow Florida driver Wes Duchak bounced back from a DNF in Saturday’s action to end up 12th in the Final on Sunday. Nate Cicero, the 2020 SKUSA Winter Series KA100 Senior champion, battled hard all weekend, but was unable to break into the top-10. A 13th place finish on Saturday was his best result, ending up outside the top-20 on Sunday.

It was nearly all top-10 finishes for the X30 Junior RPG squad. Caleb Gafrarar was double duty on the weekend, ending with the top finish of the weekend with a fifth-place result on Saturday. He was in contention for a possible podium finish on Sunday before he got caught out on a wet area splashed out by a preview competitor, making contact with a barrier that ended his race. Colombian driver Salim Hanna was just outside the top-five on Saturday, placing eighth before gaining five spots in the Final on Sunday to end up 15th. New RPG driver Teddy Musella put three RPG drivers inside the top-10 on Saturday as the Florida driver placed ninth. Completing his opening weekend with the team, Musella had the best finish of seventh, improving six spots in the Final. 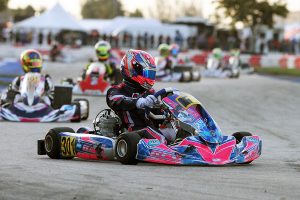 Hannah Greenemeier drove to two top-five finishes in her RPG X30 Senior ride, including third place in Round One (Photo: eKartingNews.com)

Three other drivers added top-10 finishes on the weekend for RPG. The lone Micro Swift driver Jackson Gibson improved from his 11th on Saturday to end up eighth Sunday after fighting for a top-five position all main event. Gia Cicero was the top performer for RPG in the KA100 Senior division, earning results of ninth and 12th. Washington driver Kieran Rogers felt at home in the wet main event for Sunday, improving 15 positions to finish ninth to lead RPG. That came after placing 25th on Saturday. Grace Hemmerde had a best result of 22nd on Saturday before recording a DNF Sunday. Portland driver Tommy Gritzmacher was unable to reach the checkered flag in both days of KA100 Senior.

The SKUSA Winter Series is slated to conclude on the February 11-13 weekend at the same AMR Motorplex facility in Homestead to decide this year’s champions with RPG drivers gunning for hardware in multiple categories.