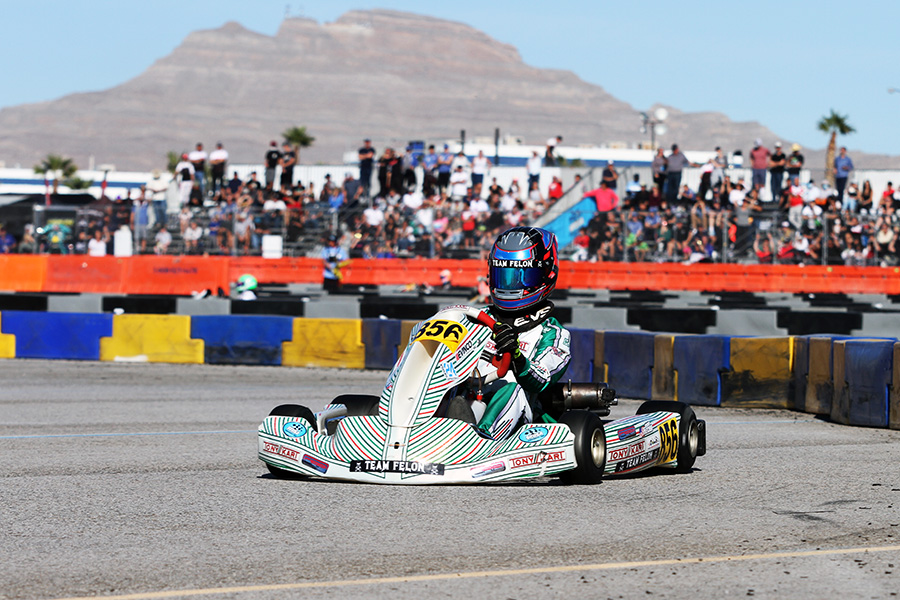 Jeremy Fletcher was named EKN Driver of the Month for December 2021 after three wins on the month at two events (Photo: EKN) 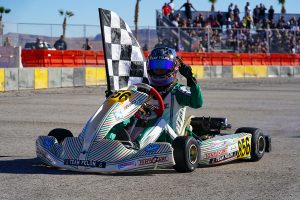 December 2021 was the much-anticipated return of the Superkarts! USA SuperNationals, with the 24th edition of the event moving to a new date and new location. Nearly 500 karters from around the world converged on the Las Vegas Motor Speedway between December 1-5. It was 742 days between the SuperSunday of 2019 and the SuperSunday of 2021 with the COVID-19 pandemic forcing the cancellation of the event in 2020. A part of history was made for SuperNationals 24 in Vegas thanks to Florida driver Jeremy Fletcher.

The KA100 Junior division was added to the SKUSA SuperNationals in 2018, providing a second Junior category for competitors to take part. Fletcher was among those to pull double duty, and was near the front in both. The KA100 class began for Fletcher by qualifying sixth. The veteran charged forward in the opening two heats, driving to the win in both. He ended up third in the final heat race, securing the pole position for the main event on SuperSunday. Fletcher jumped out to the lead and sat there for the first 22 laps. As he led, Texas driver Helio Meza worked up to second and sat on his bumper. Meza pulled the trigger prior to receiving the white flag. On the final lap entering turn four, Fletcher fought back and was able to grab back the top position. The two made contact on the exit of turn four. Meza ended up smacking the wall, as Fletcher caught air from the impact with Helio. Fletcher continued while Meza was forced to retire. Jeremy went on to take the checkered flag, securing his first SuperNationals victory. 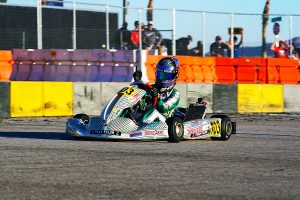 Jeremy claimed the X30 Junior win on SuperSunday, becoming only the second driver to win twice at the same SuperNationals (Photo: On Track Promotions – otp.ca)

That was only half the battle as Fletcher jumped in his X30 Junior OTK machine later in the day. Fletcher began the event by qualifying second overall in the category. Starting on the outside of the front row was a tough task, but Fletcher fought strong all three heat races. He finished the opener in third but was given a three-second penalty for blocking to drop him to seventh after posting fast lap of the race. Jeremy led the opening eight laps of Heat #2 yet ended up in third. Two separate penalties, including a pushback bumper, dropped him to 11th in the final classification. The third heat was another with Fletcher up front, this time crossing the line second and advancing up as the winner after penalties. All that action lined him up in fifth in the order on SuperSunday. It only took three laps before Fletcher took over the point in the 24-lap main event. Fighting behind him, along with consistent lap times in clean air helped to establish a solid lead. By the checkered flag, Fletcher created a four-second advantage for the victory.

With a second victory on SuperSunday, Fletcher joined four-time SuperNationals winner Connor De Phillippi as the only driver to win two separate main events at the same SuperNats event. The two wins by Fletcher puts him halfway to the top of all-time win list that includes De Phillippi, Billy Musgrave, and Kip Foster – all with four victories at the SuperNationals. 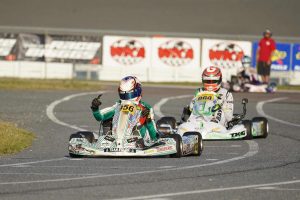 Prior to the calendar turning over, Fletcher made his official jump up to the Senior level at the World Karting Association Daytona KartWeek event, annually held during the December 28-30 time period at the Daytona International Speedway. Jeremy competed in the KA100 Senior division, qualifying second for Day 1 and Day 2 action during the timed sessions at the end of practice day. Fletcher came out and won the Day 1 Prefinal, securing the pole position for the main event. He led the first 14 laps before slipping to the second spot, where he would finish. During the Day 2 Prefinal, Jeremy slipped back to sixth on the opening lap, fighting back to third with fast lap of the race. Early shuffling opened the Final before Fletcher established himself as the race leader. He led 14 of the 16 laps to secure his first Senior victory. He also added one podium in the Briggs 206 class, placing third in the Final on Day 2.

Fletcher makes history with EKN, becoming the second driver to be named Driver of the Month in the same year, having gained the honor back in March for his winning performances at the SKUSA Pro Tour WinterNationals and United States Pro Kart Series opener (Brent Crews earned honor twice in 2017).

Fletcher is kicking off the 2022 season with double duty at the SKUSA Winter Series, sitting fourth in KA100 Senior standings thanks to a runner-up finish on Sunday and 14th in X30 Senior with a best result of fourth on Saturday, including fast lap of the race. He followed that up with a victory in the VLR Senior division at the Florida Winter Tour opener, also placing ninth in ROK Senior. Jeremy is slated to compete at the SKUSA Pro Tour, United States Pro Kart Series, IAME USA Grand National Championship and local club events in 2022. 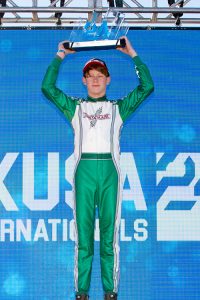 Chassis: Tony Kart
Engine Builder: Allison Racing Engines
Sponsors: Odenthal Racing Products/ORP, Nextzett Usa, Precision Karting Technology’s/PKT, Orlando Kart Center, Offset Sport, The Gun and Holster Store/ Grandparents
Series You Compete In: Superkarts!USA, ROK Cup USA, United States Pro Kart Series, Orlando Kart Center, IAME Grand Nationals
Years Karting: 10
How did you get started in karting? My Grandpa raced
What has been the high point in your racing career? Winning both classes at the SKUSA SuperNationals 24 and rejoining Team Felon
What are your goals in racing? Make it to LMP1
In a few words, how would you describe your driving style? Aggressive, Protective
Funniest moment at the race track? Ripping down the ROK banner at Ocala accidentally