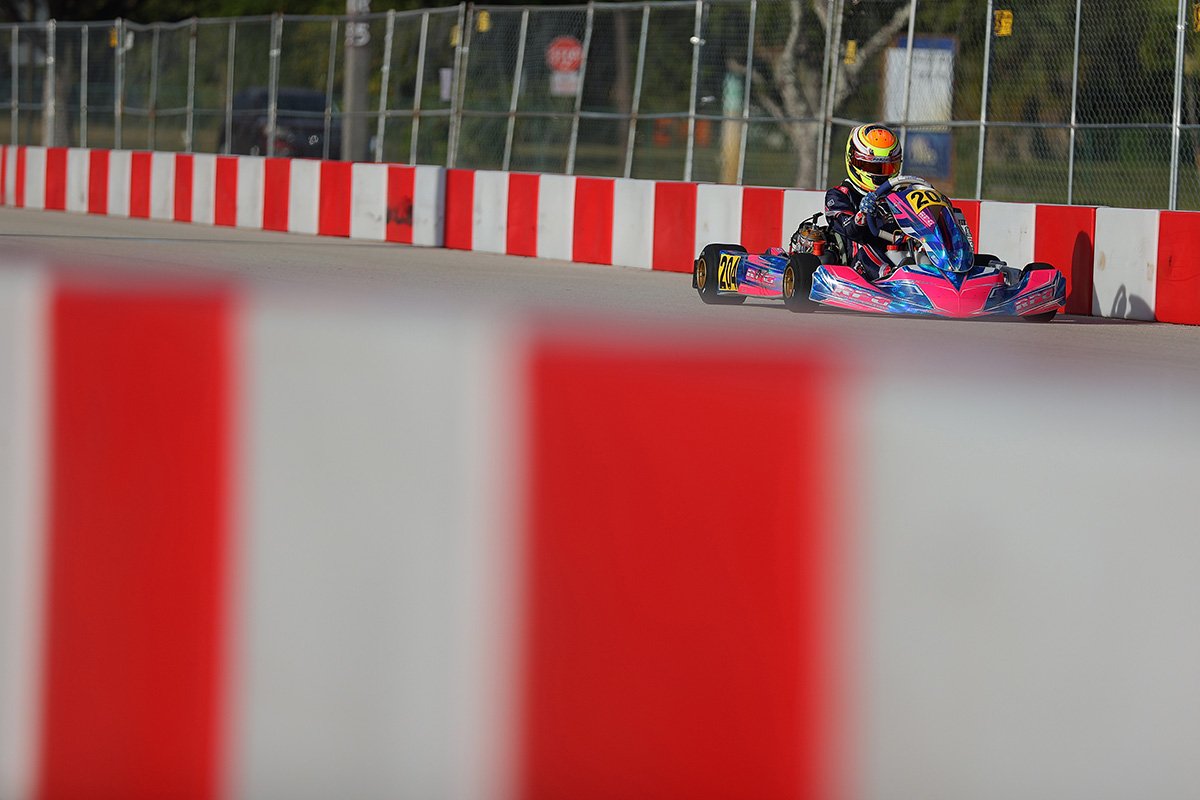 Caleb Gafrarar was the driver to beat in the VLR Junior class but ultimately finished in the second position
(Photo: Canadian Karting News)

Looking to start his ROK Cup USA Florida Winter Tour season off on the right foot, Rolison Performance Group (RPG) driver Caleb Gafrarar was back on the podium during the opening round this past weekend at the Isle Casino temporary circuit. Garnering a podium result in the VLR Junior class, Gafrarar gained eleven positions in the ROK Junior main event to earn an impressive sixth place result and be rewarded with the driver who gained the most positions in the main event.

Competing in the VLR Junior class, Gafrarar was the driver to beat from the very first practice session and carried that through the heat races. Earning the pole position in Friday’s qualifying and following that up with a pair of heat race wins, Gafrarar maintained the pole position for the prefinal. Taking the lead at the drop of the green flag on Saturday morning’s prefinal, the RPG driver never looked back and handily continued his perfect weekend.

The main event would be the first time all weekend long that Gafrarar would not finish at the head of the field. Opening the race from the pole position and leading the first lap, Gafrarar fell back to third but never gave up. Working hard to close the gap to the lead duo, he was able to slip back by into second with a few laps remaining. Making a bid for the lead on the final lap, the trio of drivers would bang wheels as they raced for the win. Coming out on the shorter end of the stick, Gafrarar was able to stand on the podium, but in a disappointing second position.

“Most drivers would be happy finishing second, but I know we had the equipment to win this weekend but struggled in the main event,” explained Gafrarar. “I pushed as hard as I could, but in the end, it was a P2 finish and good points towards the championship points battle.”

In the ROK Junior class, Gafrarar started off on the back foot as a twelfth-place result in qualifying led for a difficult outside row six starting spot for the heat races. Moving forward in the two heats, the RPG driver managed sixth and eighth place results along with a top-ten starting position in Saturday’s prefinal. It all came unraveled the next morning as Gafrarar, while running in the fourth position, was sent into the barriers by another driver who was quickly black flagged from the event.  Able to re-start in the rear of the field, he never gave up and was classified in the 17th position in the end.

“It was a good Junior ROK final as I think we found a bit of what we were missing all weekend,” added Gafrarar, who had a spirited drive from 17th to sixth. “It was a good battle and I think with a few more laps I could have been on the podium. Solid weekend in the end but now we shift the focus to the next one.”

With only a few short weeks off, Caleb Gafrarar will be back in action in Florida with back-to-back events at the AMR Motorplex and another temporary circuit at Tropicana Field in St. Petersburg.

Caleb Gafrarar would like to thank Rolison Performance Group, OTK USA, Kosmic, Bell Helmets, Minus 273, and CPI Security for the continued support in the 2022 racing season.