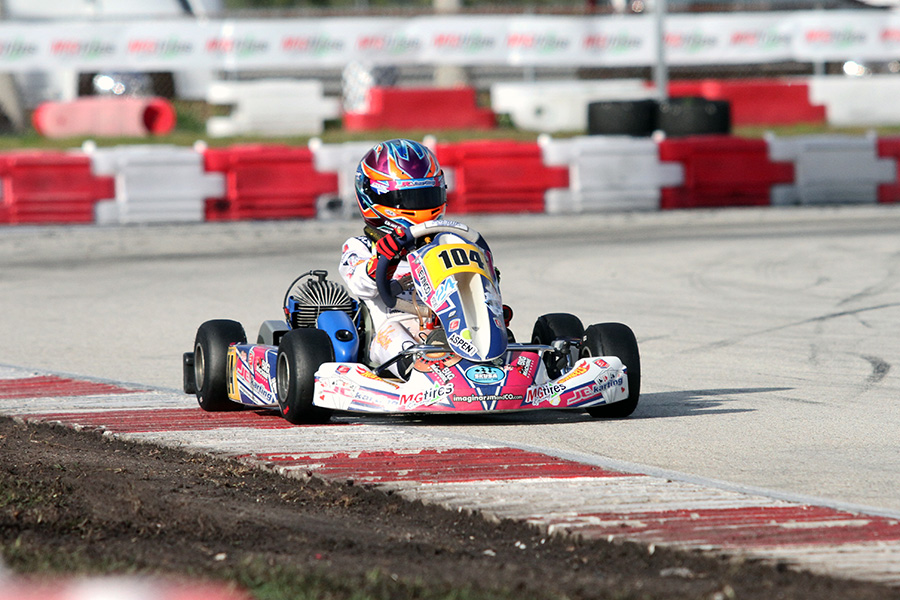 Oliver Wheldon was a double winner in the Mini Swift category (Photo: eKartingNews.com)

The 2022 season is officially underway with the first major event of the year taking place in the state of Florida, with a host of OTK USA race teams and competitors competing at the Superkarts! USA Winter Series opener. The January 7-9 weekend held Round 1 and Round 2 of the program at the AMR Homestead-Miami Motorplex presented by MG Tires. Despite the challenging weather conditions all weekend with rain on and off, including a downpour that delayed the start of Saturday’s action, OTK rose to the top with 11 victories in the 18 main events on the weekend, including 27 podium results and 45 top-five finishes. 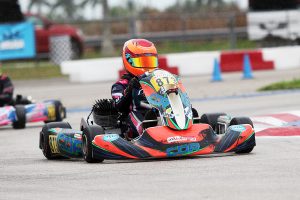 OTK products swept the top-five in two categories for both days of competition. The first came in the KA100 Junior division with Caleb Gafrarar (Rolison Performance Group / Kosmic) picking up his first career win in his first start in the category. Austin Jurs (Franklin Kart / Redspeed) was second with Valentino Garbarino (Ryan Perry Motorsport / Tony Kart) a close third for his first podium. Steven Miller (CDR / EOS) was hard charger and fast time driver, up 17 spots to fourth with Max Taylor (Mike Doty Racing / Kosmic) placing fifth. On a wet track with dry tires, Miller put in a solid performance to claim his first victory in the category. He held off Luke Welcome (Orsolon Racing / Tony Kart) for the win with Jurs gaining another podium finish. Gafrarar was just off the podium in fourth while Garbarino added a fifth-place result to his series debut. 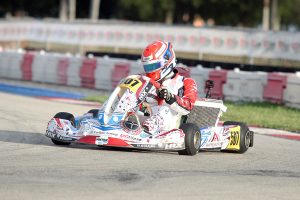 The same five drivers aboard OTK products finished within the top-five both days in the X30 Master class, with two different winners. Michel Garrido (Alessandros Racing / Tony Kart) powered through in the Final to claim his first series victory, holding off Danillo Ramalho (Racing Edge Motorsports / Kosmic). Defending SKUSA Pro Tour champion Mario Barrios (Rolison Performance Group / Kosmic) was third with Luis Schiavo (SVK / Exprit) and Diego Rodriguez (Alessandros Racing / Tony Kart) completing the top-five. Sunday was Ramalho’s turn to make a statement in the Final, passing Garrido in the closing laps to secure the victory. Barrios repeated his trip to the third step of the podium as Rodriguez improved to fourth, dropping Schiavo to fifth. 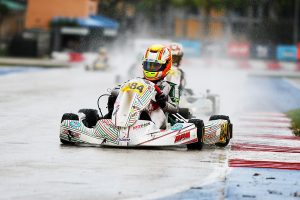 In both the dry and the wet, Carson Morgan won in the KA100 Senior division for two victories on the weekend (Photo: eKartingNews.com)

Oliver Wheldon was able to add to his win total in the Mini Swift division with two victories on the weekend. Each round ended up as a sweep to earn maximum points toward the series championship. Wheldon (JC Karting / Kosmic) led 17 of 18 laps in the Final toward victory. Luis Umana (Supertune USA / Tony Kart) joined him on the podium in third. After setting fast time in qualifying and winning the Prefinal, Wheldon crossed the line in second to end the Sunday Final, only to be named the winner after penalties were handed out. 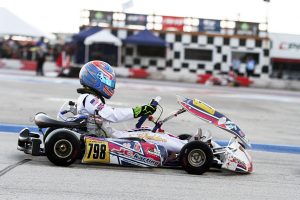 Sebastian Wheldon fought strong in X30 Junior, escaping on Saturday with his first victory in the class (Photo: eKartingNews.com)

Older brother Sebastian Wheldon (JC Karting / Kosmic) added his own victory on the weekend in the X30 Junior category. Racing in the lead pack throughout the main event, Wheldon was able to slip from third to first on the exit of the final corner to take the checkered flags. Steven Miller drove to fourth with Gafrarar placing fifth. Miller came back the next day to charge forward in the late stages of the Final, crossing the line first to earn his second victory of the weekend. Canadian Ayden Ingratta (Speed Concepts Racing / Redspeed) was runner-up with British driver Brandon Carr (Team Benik / Kosmic) making it a full OTK podium. Junior rookie Enzo Vidmontiene (Team Benik / Kosmic) enjoyed his first career top-five result in the class, placing fifth.

The final victory of the weekend came in the Pro Shifter division with Alan Isambard (International Motorsports / Tony Kart). After placing third on Saturday, he found the extra speed to boost himself to the top of the podium for his first victory of 2022. Justin Salazar (AKT / Kosmic) added a top-five result, pending the weekend fourth in Sunday’s Final. 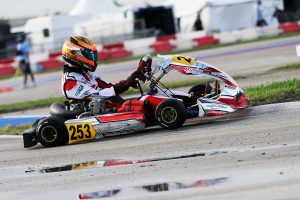 The SKUSA Winter Series finale weekend is scheduled for the February 11-13 weekend at the same AMR Motorplex facility.