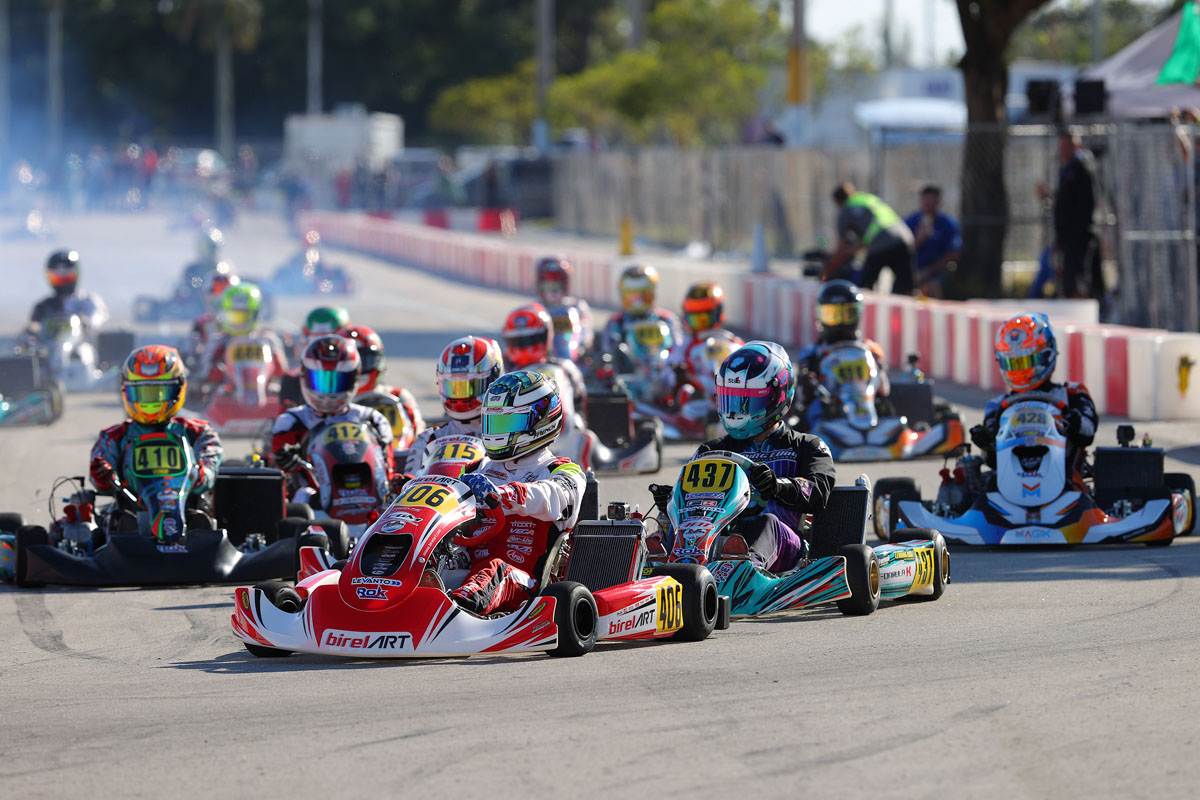 It was a jam-packed day of competition to open the ROK Cup USA Florida Winter Tour with warmup, qualifying and a pair of heat races for all classes. A schedule adjustment will see the weekend end on Saturday due to severe weather coming into the area as ROKKERs will complete both the prefinal and main events tomorrow as race one winners will be crowned.

Heat #1
From his pole position, Caleb Gafrarar (RPG) drove to the heat one victory as he pulled away from his competition to take the checkered flag by 2.802 over Iron Rock Motorsports’ Cooper Shipman. Nash Motorsportz driver Charlie Smith wasn’t the fastest driver on track but managed to maintain his P3 starting position to finish third as Ayden Ingratta (Speed Concepts Racing) crossed the line in fourth. With the front four finishing where they started, Helio Meza advanced forward one position to finish fifth.

Heat #2
Caleb Gafrarar would go two-for-two in the heat races as he added the VLR Junior heat two victory. Helio Meza leveled up four positions to come home second as Ayden Ingratta gained one position to finish third. Charlie Smith fell one position to close his day in fourth while Cooper Shipman dropped three positions to finish in the fifth position.

Heat #1
It was another pole position converted to a heat race win in the second wheel-to-wheel action of the weekend with Jeremy Fletcher (Gary Willis Racing) outpacing the rest of the field to take the heat one win. Wes Duchak (RPG) was able to be the best of the rest to finish second ahead of his RPG teammates Chase Hand, Grace Hemmerde and Nolan Allison. Larry Pegram (Pegram Racing) leveled up seven position to come home sixth as he was the biggest mover of the race.

Heat #2
It was a perfect day for Fletcher as he added the heat two race win to his heat one victory and pole position as Wes Duchak maintained his position in second. RPG drivers Chase Hand and Nolan Allison each gained two position to finish third and fourth while Grace Hemmerde dropped two to finish fifth. Jonathan Ocasio improved five positions to come home seventh to be the biggest mover.

Heat #1
While Mick Gabriel (AEM Karting) scored the pole position, he was unable to hang on to the top spot once racing began. Falling to third by the end of the first heat, it was Dylan Amundsen (MGM) and Jed Perkins (Perkins Racing) who stole the show to finish first and second. Ruben Caceres Jr. (Chad Dokken Racing) maintained his fourth place starting position to finish fourth while Gregory Campos (Piquet Sports) came home fifth.

Heat #2
Returning to the top of the result sheets in heat two was Mick Gabriel as he scored the second 206 Senior heat win. Dylan Amundsen finished just .043 in arrears of Gabriel while Jed Perkins and Ruben Caceres crossed the stripe in third and fourth. Miguel Ruiz (JAM Racing / TB Kart) was the only driver in the top-five to advance as he moved up one spot to fifth.

Heat #2
James Perkins climbed to the top of the results sheets in the second heat of the weekend as he disposed of Matthew Del Sol. It was Jason Abrams who was the best of the rest in the third position, just ahead of Jorge Ruiz and Alexander Dal Bon.

Heat #2
Luis Sanchez was able to narrowly beat Oliver Wheldon to the checkered flag in heat two by a scant .043 as Isaac Malcuit was another two tenths of a second back in third. It was Salvador Della Vecchia who was able to cross the line in the fourth position as he and Gianmatteo Rousseau maintained their starting positions to finish in the top five.

Heat #2
Madsen was able to go two-for-two in the heat races as he took the ROK Shifter Master victory over Scott Presti and Cole Mathewson. It was Juan Unigarro (San Antonio Racing) who was able to advance one position forward to finish fourth as Morne Van Taak led Rene Martinelli finished fifth and sixth for TB Kart USA.

Heat #1
It was AM Racing driver Matheus Morgatto who pushed to a 3.694 second win in the first Senior ROK heat of the day as he was able to hold off the advances of Alessandro De Tullio (Parolin USA). Diego Ramos (Racing Edge Motorsports) moved forward to finish third as Jeremy Fletcher (Gary Willis Racing) and Nick Brueckner (Orsolon Racing) advanced forward three and four positions respectively to finish fourth and fifth. Following the heat and penalties, Fletcher would drop to sixth while De Tullio would be classified in seventh bringing Marjin Kremers to P3.

Heat #2
Morgatto added another heat race win to his resume put his AM Racing machine at the front of the field as he and De Tullio finished first and second on track. Jeremy Fletcher rebounded from his heat one penalty gaining four positions to finish third as Marjin Kremers (PSL Karting) fell to fourth just ahead of Diego Ramos (REM).

Heat #2
After a red flag on lap three for a flip involving Miguel Mier and an eventual restart, Isaias was able to jump to the point and control the pace of the second ROK Master heat. Renato David improved from his third place starting position to come home second as Scott Roberts fell to third. Glauber Granero (Orsolon Racing) was the biggest gainers of the heat advancing forward six positions to finish fourth with Rob Maier (RPG) in fifth.

Heat #2
Troy Ferguson put Team Benik on the top in the second Micro ROK heat as he went on to take his second race win of the day as Benik drivers bookended the top-five. Drew Walz was able to slot into second ahead of Matheus Ramalho in third. Maxwell Macha (SLA) advanced into the top-five to cross the stripe in fourth as Royce Vega earned his first top-five result of the weekend in fifth.

Heat #2
Ayden Ingratta was back on top in the second ROK Junior heat as he went two-for-two on the day like many of the other winners. Sebastian Wheldon followed Ingratta for the second of two heat races to cross the line in P2 while Jorge Ortiz gained six positions to finish third for Supertune. It was a pair of Supertune drivers in the top-five with Luque continuing his front of the field presence in fourth and Team Benik’s Michael Costello in fifth.

Heat #1
It was Laurentiu Mardan (Tecno Kart) who scored the VLR Master heat race win as he led flag-to-flag to score the win ahead of Rob Maier (RPG) and Cayden Goodridge (Goodwood Kartways). It was a spread-out heat as the top-five were separated by 23-seconds at the end of the race with Jason Abrams (Nolan Bower Motorsports) fourth as Peter Cook (McCrone Motorsports) gained three positions to finish fifth. Following the heat, Abrams was given a two-position penalty and fell to fifth.

Heat #2
Mardan was back on top in VLR Master as the top-three drivers would remain unchanged with Rob Maier and Cayden Goodridge in second and third. Ruben Cherres (SLA Racing) moved forward one position to finish fourth while Peter Cook advanced forward three spots to finish fifth.

Heat #2
It was Danial Formal who started on pole, but it was Jake French who was leading by mid-race distance as he went to on to score his first race win of the weekend. Vincenzo Sarracino (VS10 Karting) followed French across the line for the third position on track while AJ Myers was up four to finish third. Giano Taurino was back in the top-five with a fourth-place finish as Formal would drop to finish fifth.

With weather moving into the area for Sunday, ROK Cup officials decided to forgo heat three and complete the race weekend on Saturday. Always working for the racer, the ROK staff adjusted on the fly to provide the best possible conditions for teams and competitors heading into the main events.