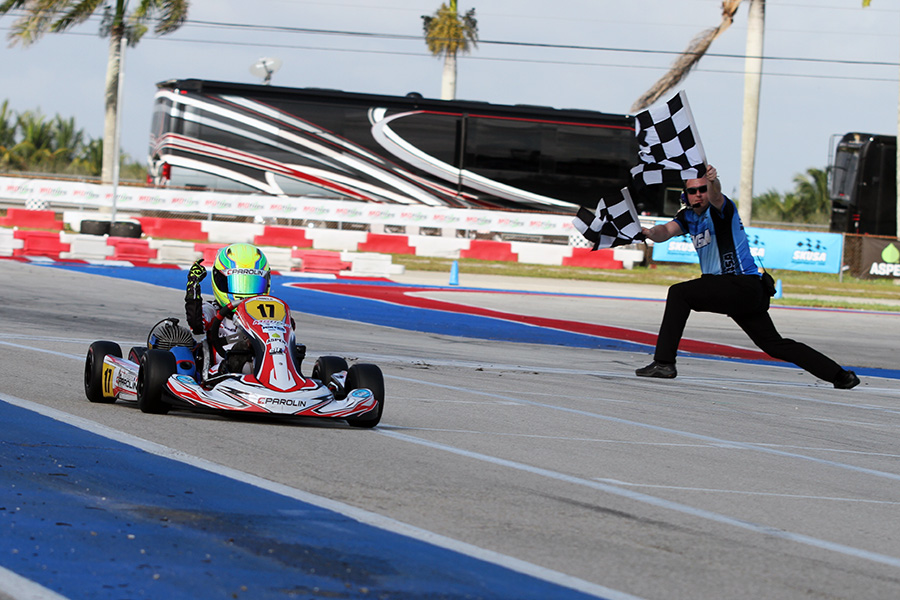 The Parolin USA race team kicked off the 2022 season in style at the opening rounds of the Superkarts! USA Winter Series at AMR Homestead-Miami Motorplex Presented by MG Tires, winning three main events thanks to impressive performances by Alessandro De Tullio and Alessandro Truchot. De Tullio stormed back from a Saturday win in X30 Senior that was lost in the tech barn, outgunning a stacked field of drivers on Sunday to gain the redemption he was looking for. For Truchot, the first two rounds of the Winter Series provided a platform for his breakout performances on the national scene as the eight-year-old swept all six official sessions in the Micro Swift category to come away with two wins. Matias Orjuela and Rocco Simone were all in the fight all weekend. Orjuela finished second on Saturday in X30 Junior and then backed up that result with a run through the field in Round 2 to finish sixth, while Simone impressed in his Parolin debut, joining Truchot on the Micro Swift podium on Sunday with a runner-up result to make it a Parolin 1-2 on the day.

As Parolin USA’s sole X30 Senior driver, de Tullio kept the brand in the spotlight after qualifying fourth on Saturday. Alessandro stepped forward to top the Prefinal before stretching out to the win in the final. Sadly, De Tullio’s powerplant narrowly missed one of the inspection specifications, negating this win, but he came back on Sunday and left no doubt that his pace was not the engine, but instead in his Parolin LeMans chassis and his immense talent.

Truchot was certainly dominant in Micro Swift, topping all six sessions regardless of the conditions. In both main events, Alessandro leveraged his pole position and clean opening laps to quickly stretch out comfortable margins, and he then put his head down to knock out a consistent pace en route to the wins. Adding to Truchot’s success for the team, Simone has been a great addition to the squad, advancing forward all day in Round 1. After qualifying 11th, he moved to seventh in the Prefinal and the jumped into the fight for the podium, only to finish fourth.  Rocco came back strongly on Sunday and after spending time with the Parolin USA coaches and mechanics, he improved in qualifying to sit second after the timed session is difficult conditions. He dropped to seventh in the Prefinal and then stormed back into the podium fight in the main event to take a well-deserved second, celebrating his birthday in style. 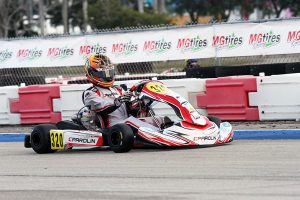 Jaime Garcia and Pasha Ali were also part of the Parolin USA Micro Swift team. Garcia finished 12th on Saturday and then moved into the top-10 for all of Sunday, qualifying 10th before going on to finish ninth in the final tally. This was Ali’s first national level event and he learned a great deal throughout the weekend and picked up pace dealing with the varying weather conditions. Ali was 25th and 29th in the two main events.

Orjeula’s weekend performances in the X30 Junior class were quite different. On Saturday, he was never really outside the top-five after qualifying in fifth. He finished fourth in the Prefinal and then record a second-place result in the main event. On Sunday, an issue in qualifying left him back in 34th, and he attacked in the 10-lap prefinal to advance 20 positions to finish fifth. From the seventh row in the final, Matias advanced steadily to come home sixth as he overtook eight drivers. Orjuela was joined by Beckham Jacir in X30 Junior and he responded with a pair of top-15 finishes. Jacir was in the fight mid-pack all day on Saturday, finish 13th. On Sunday, Jacir lost the chain from his kart at the end of the Prefinal to finish 30th, but he fought back in the main event to advance a stellar 18 positions to finish 12th. 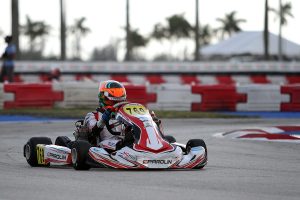 Sarah Bradley led the way in the Parolin USA camp in Mini Swift, turning in a strong effort to start the 2022 season after qualifying 15th. Sarah moved forward to seventh in the Prefinal and then battled inside the top-10 for the entire final before coming home in eighth. Sunday’s sporadic weather challenged everyone, and late day rain truly messed with the planned strategy. A wet and potentially drying track motivated the team to roll the dice with Bradley in an effort to steal a victory, as they went with slick tires while the rest of the field were on the treaded MG rains. Bradley had qualified sixth and finished ninth in the Prefinal, and if it were not for a lap 2 incident that brought her to a complete halt, she would likely have won. As the track dried, Bradley was far and away the quickest driver on the track, and even with the early setback, she passed over a dozen drivers in the final five laps to finish in 13th.

Bronson Koustas was also in the Mini Swift category but ran only on Saturday after battling food poisoning. In his lone day of competition, he found himself in some heavy battles and added a top-15 finish to Parolin USA’s weekend total. Newcomer Ethan Manjencic is part of the Parolin USA driver development program and is early in his training, and the constantly changing conditions provided him with quality experience. Ethan was 32nd on Saturday and 36th on Sunday. He’ll take all that he learned in Rounds 1 and 2 when the SKUSA Winter Series returns in February. 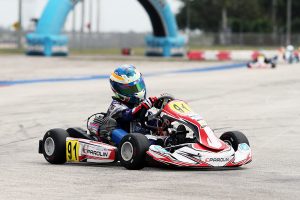 Canadian Rocco Simone drove to a runner-up result in the Micro Swift category in his debut with Parolin USA (Photo: eKartingNews.com)