Morgan, Wheldon, Miller and Truchot double up on weekend as de Tullio gains redemption to close out opening weekend 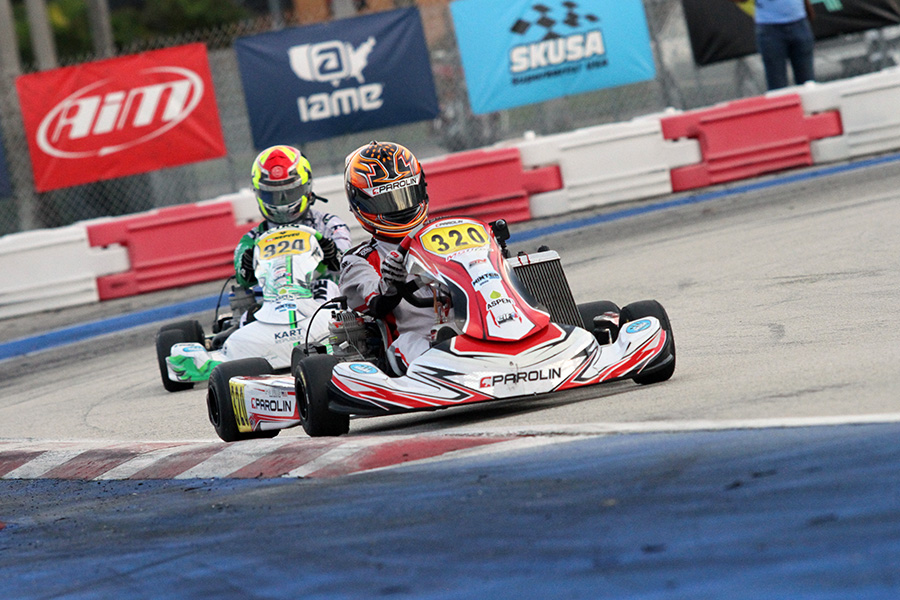 It was a wild closing day for the opening weekend of the 2022 Superkarts! USA Winter Series at the AMR Homestead-Miami Motorplex presented by MG Tires. Weather was the spoiler all day long, with on and off showers to make the tuners and the rest of the paddock question the tire selection each time they pushed to the grid. In the end, it was a safe and exciting weekend of racing to open up the new season, with Sunday’s Round Two action welcoming new winners on the weekend along with others adding to those gained on Saturday. 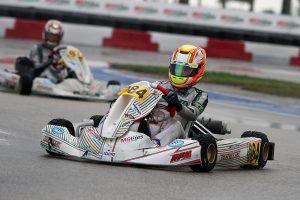 Redemption is the word to describe the action in the X30 Senior sponsored by Group A Apparel for Alessandro de Tullio (Parolin USA). The provisional Saturday winner was removed from the results following tech. The Florida driver came back to qualify fifth this morning on a drying track as Canadian Thomas Nepveu (Trinity / Kart Republic) set the fast time. It was de Tullio that powered through in the Prefinal for the win with Nepveu dropping to third behind Saturday top qualifier Matheus Morgatto (AM / Exprit). Nepveu was quick early in the Final, and jumped out to the lead with de Tullio slotting in behind as the top two drove away. By lap nine, de Tullio took over the top spot, and set sail away with the lead. He drove away to a 2.6-second advantage to claim the victory, leaving tech with the no issues to celebrate from the top step of the podium. Morgatto had fast lap of the race, and drove past Nepveu for the runner-up spot. Fellow Brazilian Diego Ramos (REM / Kosmic) held onto the fourth spot with SKUSA Pro Tour defending champion Hannah Greenemeier (RPG / Kosmic) winning the hard-fought battle for fifth. 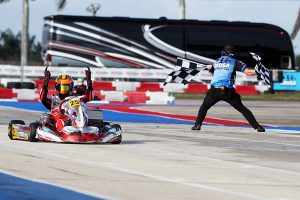 Alan Isambard recovered from contact on the opening circuit to claim victory in the Pro Shifter division (Photo: EKN)

Track conditions for the qualifying session in KA100 Senior sponsored by AM Engines were a bit tricky. The sun was out, the track was drying, and drivers were on dry tires. A few wet spots, especially the last corner, turn 12, sent drivers wide on the exit and into the new grass, which quickly became mud over the first sessions of qualifying. Connor Ferris (TFR / Kart Republic) survived the session with fast time, ahead of Senior rookie Jeremy Fletcher (GWR / Tony Kart) and Saturday winner Carson Morgan (RPM / Tony Kart). Morgan quickly jumped out to the lead in the Prefinal and held off Fletcher for the win as Ferris fell to fifth. Unlike the wild Saturday Final, Sunday would be a one-driver show as Morgan drove away with fast laps of the race to a 1.3-second advantage on a wet track. Fletcher held his ground in second to claim his first SKUSA Senior podium finish. A number of drivers fell out due to attrition, and that allowed Senior rookie Aden Rudolph to climb up the order, stealing the third spot on the final circuit for another podium finish on the weekend. He beat out Peyton Phillips (Core / Redspeed) for the spot with Calvin Wetzel (MDR / Kosmic) earning hard charger, advancing 21 spots in 22 laps for fifth. 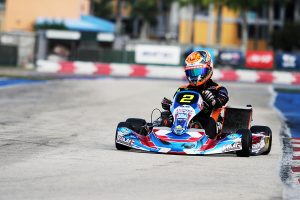 Skitchy Barnes swept the action on the day in Master Shifter (Photo: EKN)

The Pro Shifter category, sponsored by PSL Karting, welcomed a second different winner on the weekend. Saturday’s top driver Billy Musgrave (Factory Karts) set fast time in qualifying, but a mechanical issue in the Prefinal put him on the sideline. That allowed Giano Taurino (Magik Kart USA) the chance to drive away to the race win. Contact at the start shuffled up the order behind him to begin the Final, until Musgrave became the top challenger. Musgrave was able to run down Taurino and take over the lead on lap 14. Alan Isambard (IM / Tony Kart) followed him through the following lap, and began putting on the pressure to Musgrave. Isambard made his move on lap 19, and was able to inch away the last three circuits to claim the victory. Musgrave settled for second with Taurino in third. Scott ‘Skitchy’ Barnes (HMG / TB Kart) swept the day in the Master Shifter class sponsored by Harden Motorsports Group, coming back from an engine issue on Saturday. Farshad Bagheri (TB Kart USA) also recovered from a DNF on Saturday to place runner-up with Saturday winner Ken Schilling (HMG / Aluminos) in third. 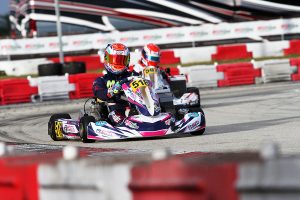 Danilo Ramalho made a late race charge to claim the victory in X30 Master (Photo: EKN)

Saturday was a late run by Michel Garrido (Alessandros / Tony Kart) to claim the victory in the X30 Master class sponsored by Rolison Performance Group. Brazilian Danillo Ramalho (REM / Kosmic) did a similar run on Sunday to take the victory. Ramalho came out right away with fast time in a tricky qualifying session, but it was Garrido that came away with the win in the Prefinal. Three drivers made up the lead group in the Final, including Garrido, Ramalho and SKUSA Pro Tour champion Mario Barrios (RPG / Kosmic). Garrido was able to put down fast lap of the race, and lead the opening 20 laps, but on lap 21, Ramalho made the move in the left turn following the double right handers. The pass gave Ramalho enough room to go on to the checkered flag for the victory. Garrido settled for second with Barrios in third. Diego Rodriguez (Alessandros / Tony Kart) came up from seventh to take fourth away from Luis Schiavo (SVK / Exprit). 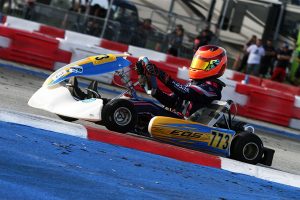 The two Junior divisions were won by Florida driver Steven Miller of Chad Dokken Racing. The X30 Junior class sponsored by SpeedLab Racing Engines saw a split qualifying session with two different weather conditions. The first with the slower drivers from Friday final practice was in the dry, while the second with quick drivers was in wet conditions. Per the SKUSA rulebook, the first group was the inside positions of the Prefinal grid with the wet session lined up on the outside. That provided newer names at the front, including Brandon Carr (Team Benik / Kosmic) on the pole position. Ayden Ingratta (SCR / Redspeed) started fourth but jumped up and out to the lead and the win in the Prefinal. He held a large advantage to begin the 22-lap Final, until he was run down by Miller, who started fifth. Miller grabbed the top spot from Ingratta on lap 19, and went unchallenged to the victory. Ingratta settled for second with Carr ending on the podium in third. Max Garcia (Trinity / WPK) recovered from issues in the Prefinal to improve 22 positions to fourth with Junior rookie Enzo Vidmontiene (Team Benik / Kosmic) finishing fifth. 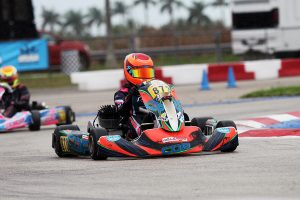 The first victory for Miller came in the KA100 Junior division sponsored by Team Benik. Miller qualified 10th as fellow Floridian Max Schweid (JC / Kosmic) set fast time on a tricky drying track. Saturday winner Caleb Gafrarar (RPG / Kosmic) was third in the session, and led all 12 laps of the Prefinal for the win. A wet main event saw Gafrarar lead the opening four lap until he was dropped to third by Austin Jurs (FMS / Redspeed) and Miller. Jurs led just three laps before he dropped down to sixth, allowing Miller to take control. From there, Miller led the rest of the distance, holding off a charging Luke Welcome (Orsolon / Tony Kart) at the line for the victory. Jurs fought back to third with Gafrarar fourth and Valentino Garbarino (RPM / Tony Kart) rounding out the top-five. 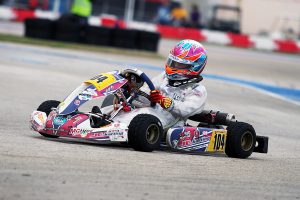 Oliver Wheldon was promoted to the top spot on the podium in Mini Swift (Photo: EKN)

The Mini Swift sponsored by DNJ Intermodal Services was the only Final decided after the checkered flag on the day. Saturday winner Oliver Wheldon (JC / Kosmic) was able to edge out the field for the fast time in qualifying and then came away with the Prefinal win after provisional winner Salvador Della Vecchia (SAR / Parolin) was penalized five seconds for contact, dropping him to seventh. On a wet track, Keelan Harvick (Harvick / Nitro Kart) jumped out to the lead. He was challenged early by Kai Johnson (Energy) until they made contact and Johnson fell down the order. Harvick continued one with Wheldon on his bumper. They ran 1-2 with Harvick earning the provisional victory. A five-second penalty for the contact with Johnson took the win away, promoting Wheldon to the top step of the podium for a second victory on the weekend. Johnson fought back to third on the track, ending up as the runner-up as Harvick was classified third. Phaethon Saradpon (AKT / Kart Republic) put two Mini rookies into the top-five in fourth with Max Cristea (PSL / Birel ART) ending up fifth. 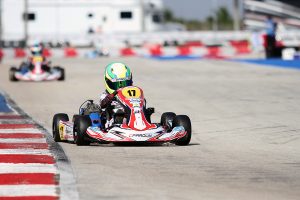 A perfect start to 2022 season by Alessandro Truchot with his second victory on the weekend in Micro Swift (Photo: EKN)

It was another dominating performance in the Micro Swift class sponsored by Trinity Karting Group for Alessandro Truchot (Parolin USA). Truchot swept the action on the day, from qualifying to leading every lap in the Prefinal and Final. The advantage was 3.442 seconds at the checkered flag after 20 laps for a second perfect day on the weekend. Rocco Simone made it a Parolin USA 1-2 finish, beating out Benja Fernandez (VM / Kart Republic) for the runner-up spot. Ashton Woon (Nitro Kart) improved 11 spots to fourth with Jaxon Porter (Benik) following him through, advancing 12 positions to fifth.

The Superkarts! USA Winter Series resumes on the February 11-13 weekend, back at the AMR Homestead-Miami Motorplex presented by MG Tires facility. The circuit will change in the clockwise-direction for Round Three and Four toward the best three rounds championship program.