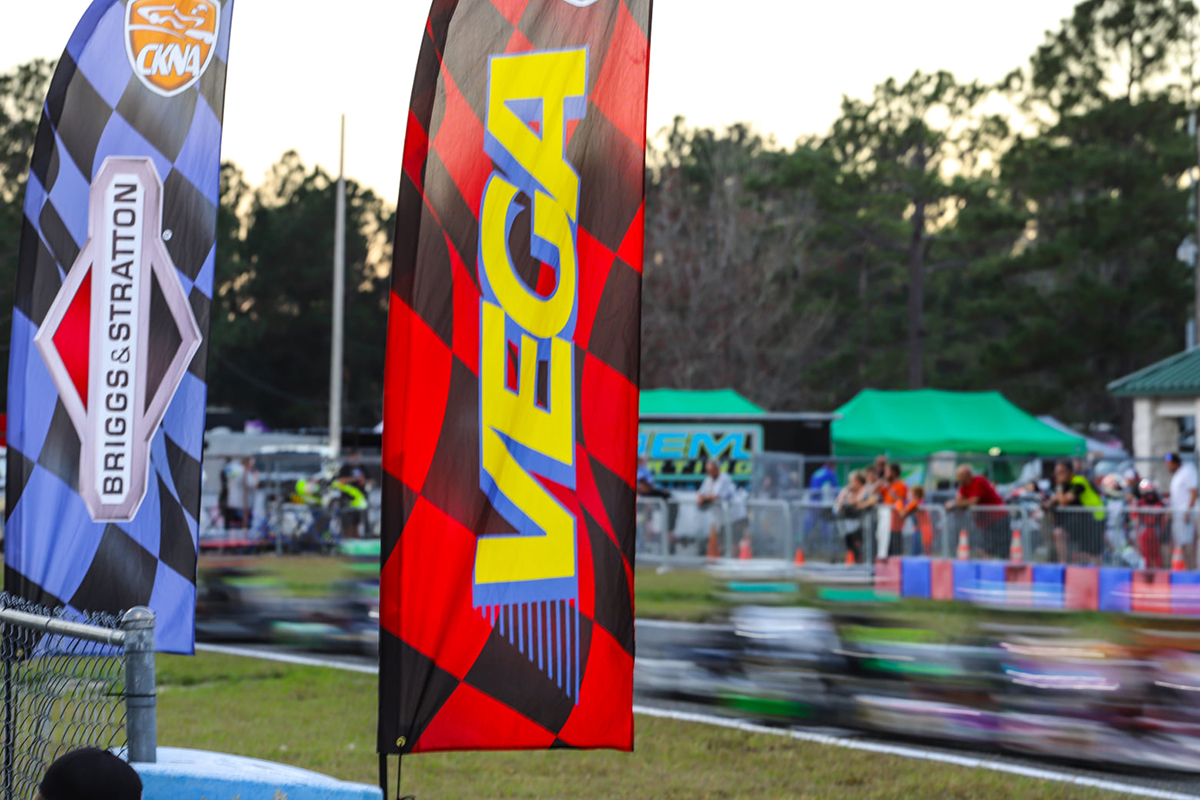 The inaugural Cup Karts North America Winter Nationals was held over the New Year’s celebration weekend – December 31 – January 2 – at the historic 103rd Street Sports Complex in Jacksonville, Florida. The event served as the first ‘national’ CKNA event of the 2022 season, along with the opening round of the 2022 CKNA South Division program.

The 7/10-mile circuit, which has been a hotbed for 4-cycle racing for decades and hosted the FIA World Karting Championship in 1986, was contested in the clockwise direction, including the 1000-foot straight-away for the Briggs & Stratton 206 powerplants to rumble down all weekend. Friday practice and Saturday heat racing featured action under the lights, setting up for the main events contested on Sunday for the 181 entries in the eight categories. 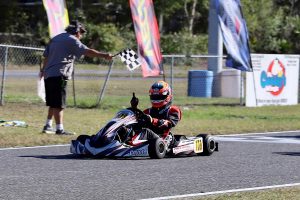 The headline division of Senior Medium featured 27 drivers in the category, led at the start of the weekend by 2021 CKNA North Division champion Mick Gabriel. The driver from Illinois edged out Florida driver and 2021 CKNA South Division champion Corey Towles by 38 thousandths of a second. Add in four-time USPKS champion Brandon Jarsocrak, and the trio fought hard for the win in the opening heat race. Each took a turn at the point with Towles crossing the line first, but a penalty for contact put him behind Gabriel, who was promoted to P1. Jarsocrak finished third and moved up to the lead by lap two of Heat #2 under the lights. He led the rest of the distance for the race win. An early fight in the Final between Jarsocrak and Gabriel took place until Jarsocrak secured the top spot at the halfway point of the 20-lap run. At the same time, Jacob Duvall climbed from seventh to second, and they would run that way to the checkered flag. Jarsocrak scored the inaugural victory by just over one tenth ahead of Duvall. Tyler Lloyd set fast time in the race, slipping past Gabriel for third with Dylan Amundsen in fifth. 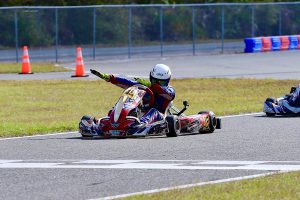 Several drivers were within the hunt in the 20-driver Senior Light division. Towles set the bar in qualifying, posting a 42.022-second lap to edge out Mick Gabriel and James Overbeck. Towles led the opening eight laps until he was shuffled down the order, allowing Jarsocrak to take the point. That was until the final lap with multi-time CKNA Grand Nationals winner Colin Warren took the top spot and the win, brining Overbeck and Gabriel with him. Towles fought back in Heat #2, climbing back up to the point by lap seven, scoring the race win ahead of Gabriel and Jarsocrak. Multiple lead changes took place over the 20-lap Final with Overbeck and Jarsocrak establishing themselves as the top two. Jarsocrak was leading at the white flag with Overbeck able to pull off a last lap pass for the victory. Jarsocrak settled for second with Gabriel in third. Warren was shuffled down the order early but fought back to fourth with fast lap of the race. Eli Fox completed the top-five.

The Senior Heavy category had 10 drivers, which was nearly swept by veteran Florida driver Sean Meier. Caylyn Brown was able to grab the fast time in qualifying, clearing Meier and the rest of the field by over two tenths. Brown led the first 13 of 14 laps in the opening heat before Meier stole the top spot and the win. Meier went wire-to-wire in the second heat race to earn the pole position for the Final. Brown along with Logan Stephens fought with Meier throughout the 20-lap main event, each taking a turn at the point. Meier secured the top spot on lap 18 and held through to the checkered flag, taking the inaugural victory by 81 thousandths ahead of Stephens. Brown was a close third with Macon Moore and Michael Clark completing the top-five. 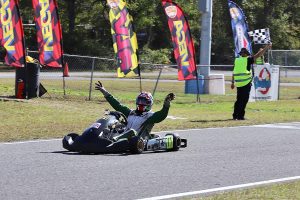 One driver was able to double up in the win column as Todd Baron won both the Masters and Legends divisions. Baron – the 2021 CKNA Grand Nationals Legends champion, swept the action in the 25-driver Masters class. Baron set fast time in qualifying and led every lap of the two heat races for the wins. In the Final, Baron led all 20 laps to establish a 3.3-second advantage at the checkered flag for the inaugural victory. Kevin Medearls drove to second with Barry Hastings winning the battle for third ahead of James Inscoe and Mike Stephenson – who set fast time of the race.

The Legends class featured 20 drivers battling for the inaugural Winter Nationals victory. Baron was able to edge out Inscoe for the fast time in qualifying by only 17 thousandths. Leading the opening 13 laps of Heat #1, Baron was shuffled back to second on the final lap by Inscoe, who claimed the race win. It was a similar run for Inscoe, leading the first nine of the 10-lap second heat. On the final circuit, WKA Daytona KartWeek winner Don Newman stole the top spot and race win. Baron retired on lap three and would start the Final from sixth after calculating the heat points. It took him seven laps to grab the top spot away from Inscoe, driving away to a three-second advantage for the victory. Newman and Timothy Clark – who posted fast lap of the race – slipped by Inscoe for second and third with Jesse Samples completing the top-five. 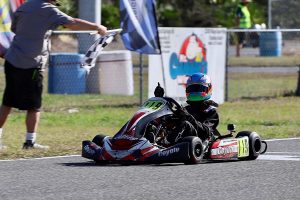 The largest category of the event was the Junior division, welcoming 35 drivers for the inaugural Winter Nationals. Following qualifying, the class was split up into two groups for the heat races. Texas champion Ragan Saville, making his Junior debut, bested the field in qualifying with a 42.708-lap time to edge out Nash Gierke by 65 thousandths. Neither were able to translate that into wins in the heat races as four different drivers won in the four heat races with Camryn Reed, Parker DeLong, Owen Lloyd, and Spencer Conrad earning wins. DeLong established himself as the top driver to begin the Final, leading the opening 16 laps with Conrad on his bumper. That was until Henry Wheeler – who started 11th – was able to work past the top two, brining Lloyd with him. Wheeler led three laps, taking the white flag as the leader. On the final circuit, Lloyd was able to slip past for the lead and the inaugural victory. DeLong also worked by Wheeler, placing second. Conrad and Saville completed the top-five.

Sportsman was the second largest, with 33 drivers, led by Tristan Murphy. He set the fast time in qualifying ahead of Carter McMurray. It was Murphy winning his two heat races with Isaac Malcuit coming through for the wins in the other two heats to establish themselves as the front row for the Final. The two exchanged the top spot several times, including the final circuit. Malcuit was leading at the white flag but Murphy came around for the checkered flag with the lead, taking the victory by four tenths. Josey Chambers set fast time in the race for a third-place performance with McMurray and Jaxon Young rounding out the top-five. 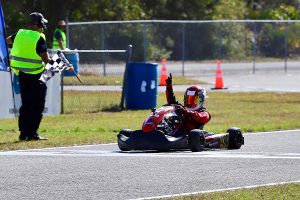 Tristan Murphy swept the Sportsman division for the victory in Jacksonville (Photo: CKNA)

The other sweep of the event came in the 11-driver Kid Kart division. Parker Stewart led the field in every on-track session. From qualifying, to the two heat races, Stewart finished P1. In the Final, Stewart led all 15 laps to become the inaugural Winter Nationals winner. Cooper Mull kept it close, finishing second with Liam Fohr in third. Giovanni Fiorita was fourth with Alex Nunally – posting fast lap of race – ending up fifth.

The CKNA South Division is set to return to action on the February 4-6 weekend at the Monticello Karting facility in northern Florida, featuring two rounds of racing. The next major event for CKNA will be the second edition of the Spring Nationals held at the Charlotte Motor Speedway on the March 4-6 weekend. The CKNA North Division is scheduled to begin on the April 22-24 weekend, with the location to be determined.