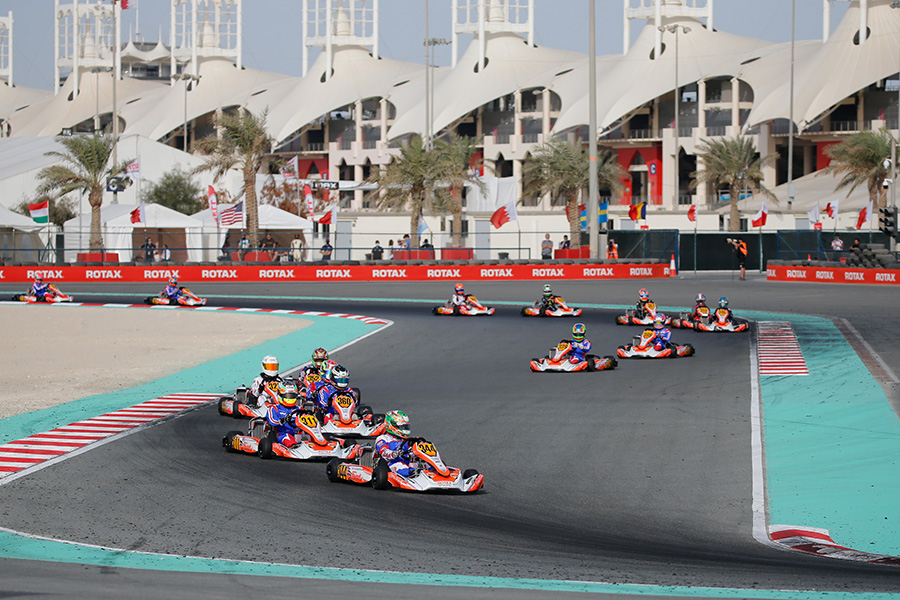 The welcoming morning breeze in Sakhir not only provided a cooling sensation to the already hot temperatures around the 1.414-km circuit, but also brought along the air of heightened anticipation for what was to transpire today, amidst the sands of the Persian Gulf.

After a week-long adventure for all the 378 drivers from around 60 nations with seven classes competing, our 2021 Rotax MAX Challenge Grand Finals Champions were finally crowned, as the atmosphere, passion, and sheer emotion of the highly competitive action out on track. Cheers and roars from the grandstands were plentiful, as the crowds at the track were willing their drivers on to take their place on the top step of the podium at the end of the day.

All the hard work over the course of the past few days would come down to this moment for a select few drivers, whose hard work, grit, and determination would pay off towards a pivotal moment, where they would be those that would bathe in the glory of becoming victorious as RMC Grand Finals Champions!

The racing was to say the very least, filled with excitement and drama, providing us with some deserving winners, who were crowned this afternoon in the late afternoon Bahrain sunshine, with the event being concluded with the Sundowner event in the paddock by the podium.

Who were crowned as our 2021 Champions? Let’s tell you what happened…. 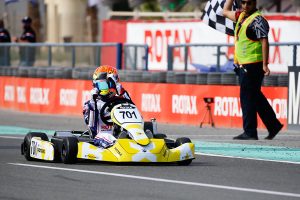 Oscar Pellemele completed what was a dream week to become the inaugural RMC Grand Finals E20 Grand Finals Champion here in Bahrain, winning 4.941 seconds after 12 laps ahead of Sweden’s Hannes Morin, who secured his best ever Grand Finals result. Morin would instantly put the pressure on those in front, by sweeping round the outside of the UAE’s Theo Kekati and almost taking the lead off the Frenchman through the very first corner of the race itself, but would have to slot behind the #701 going into turn two.

Morin would make an unforced error at turn five of lap 9, which brought the likes of Kekati, Malte Ebdrup and David Aulejtner amongst others into a herculean fight for what would end up being the runner-up spot. Kekati would suffer an issue that eliminated him on the spot on the tenth lap at turn five, putting to bed his chances to take second.

Aulejtner was able to secure third, having bettered the likes of the Danish pairing of Victor Nielsen and Malte Ebdrup who completed the top five, as they were also embroiled in the mix for what was a fully-charged battle of gargantuan proportions. Finland’s Jalava took sixth, but Frederico Peters initially crossed the line in seventh, but would be demoted to ninth following a front fairing penalty.

This then promoted the USA’s Ellis Spiezia to seventh, after the #704 started 13 th by making up a total of six places, putting in some calculated and aggressive overtakes in the process. Canada’s Teddy Sin took eighth place, ahead of the demoted Peters, whilst Mats Johan Overhoff completed the top ten. 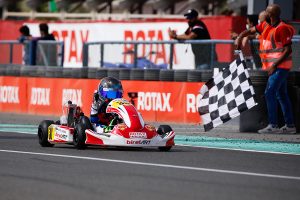 Estonia added another Grand Finals crown to their tally, as the #30 of Nikita Ljubimov was able to get away from the other 36 drivers to take the title by 2.269 seconds ahead of Manual Miguez Gayoso from Spain. A spirited drive from Austria’s Dragos Avasilcutei saw the #10 close the gap to just over eight tenths of a second to second place, ensuring a welcome trip to the podium in third place.

It was close between the drivers battling for fourth place all the way down to tenth, where they were only covered by 1.060 seconds at the chequered flag, but it was Lithuania’s Ainis Vibriantis that secure it at the end of the 12-lap race, followed by Canada’s Alexis Baillargeon. The Czech Republic’s Zdenek Babicek would unfortunately have to settle for sixth, having started on the front row alongside pole sitter Ljubimov.

Polish contender Antoni Ociepa in the #24 would only lose one position at the finish in total, as he would take the chequered flag in seventh, ahead of the hard-charging Tom Papenburg from the Netherlands. The #2 would move up five places to take eighth, in front of Great Britain’s Albert Friend.

He had much better luck than countryman Kenzo Craigie, who dropped significantly down the order after an incident during a third place side-by-side battle in the early goings. The UAE’s Zain Elhomossany was on top form in the final, as the young man in the #12 scythed his way through the field from 32nd on the grid to take tenth place. 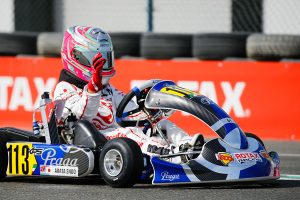 Japan celebrated in style as Arata Endo emerged as the victor after 14 laps of racing here in Bahrain, pipping Poland’s Borys Lyzen by a mere 0.116 seconds in a clear battle of wills and guts to see who would come out on top. It was a stellar drive from Great Britain’s Scott Marsh, who was able to pick his way through a further nine drivers from twelfth.

Canada’s Jensen Burnett in the #146 would finish in a strong fourth, having been one of many drivers that had been in contention, finishing in front of Poland’s Julius Ociepa. Lithuania’s Markus Silkunas started seventh, but would finish a further place up the order in sixth, ahead of Spain’s Hugo Marti.

It was a comeback and a half for Lebanon’s Christopher El Feghali, who would be one of several drivers that would make up over 15 places to finish in eighth, after Belgium’s Mateja Radenkovic would be given a post-race ten-second penalty for avoidable contact, which demoted him to 22nd . Mathis Carnejac was also into the top ten, taking ninth place, 0.208 seconds in front of the Netherlands’ Max Sadurski. 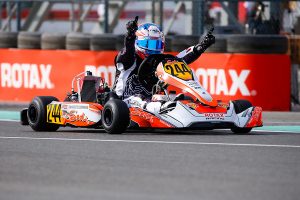 It was a perfect week in the office for Latvia’s Tomass Stolcermanis, who had won every race, capping it off with a win in the Grand Final, securing the nation their very first RMCGF crown in the process, despite a full course caution after an incident on lap 10.

He would also get the better of the drivers behind that completed the top three, as the Netherlands’ Jayden Thien and Belgium’s Kaï Rillaerts were closing in before the race neutralisation, when green flag racing got underway on lap 14. France’s Teo Blin would move up to fourth from ninth after the 18 laps, in front of the Netherlands’ Enzo Bol by 0.226 seconds. Harry Linden from Great Britain would push his way forwards from 12 th to round out the top seven drivers, in front of Japan’s Mirai Nishida and Slovakia’s Matej Konik. Sweden’s Sebastian Svensson would also storm his way up the field, making up a total of 15 places to round out the top ten.

Mark Kimber would end up taking his second RMC Grand Finals title in two classes, having won as a Junior in 2016, where Great Britain would sweep the podium thanks to Kai Hunter in second and Sean Butcher, with all three drivers being covered by 2.182 seconds after a drama-filled 21-lap race, which initially saw Tereza Babickova (Czech Republic) and Callum Bradshaw (Great Brtiain) complete the top two.

Post-race, Babickova would be handed two penalties post-race in the form of wheels being out of the tramlines on the rolling start, along with a front fairing penalty that totalled eight seconds, demoting her to fourth at the finish, Bradshaw also was reprimanded with a 10-second time penalty afterwards for causing an avoidable collision, eventually demoting him to seventh.

Despite an initially difficult first part of the race, the UAE’s Lachlan Robinson would drop outside the top ten, but would emerge resurgent to take fifth for the Emirati nation. Clayton Ravenscroft would at one point lead proceedings after getting ahead of the likes of Bradshaw, Babickova et all on the first turn on lap two, but he would end up falling to sixth at the flag.

The UAE’s Kamal Agha made it two drivers for the Middle Eastern nation to hit the top ten in eighth place, ahead of two drivers that recovered well to place in the top ten. Estonia’s Ruben Volt would make his way up from 23 rd to ninth, ahead of the sole Kuwait representative, Fahad Al Khaled, who took tenth after making up 12 places.

Please note that at the time of this report that the results are currently provisional at this time. 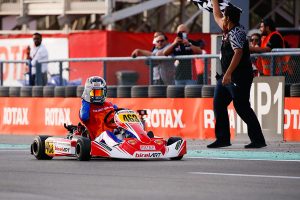 The Netherlands’ Martin Van Leeuwen was the class of the fields, having battled hard with the likes of France’s Antoine Barbaroux and India’s Kyleaditya Kumaran in the latter stages, after the first two drivers had managed to break away to battle between themselves.

Van Leeuwen was greeted with welcome cheers and noise from Team Netherlands from the stands as he crossed the line after 21 captivating laps to win from Kumaran by 0.198 seconds, who is the first ever Indian driver to hit a RMC Grand Finals podium in the 21 runnings of the event since 2000. Barbaroux would finish second, but a post-race 10-second time penalty dropped the #435 down to 11th.

Patriks Noels Locmelis would secure another Latvian on a RMCGF podium this year, as he took a deserved third place, 0.345 secons off Van Leeuwen. Canada had more Maple Leaf pride to cheer for, as Gianluca Savaglio was able to take fourth place, in front of Belgium’s Glenn Van Parijs, who started 14 th to end up fifth.

Matthias Njeim from Lebanon would be just over 1.3 seconds off the #409 to secure sixth place, in front of France’s Nicolas Picot, who was seventh after a great drive that saw him start 19th. Austria’s Philipp Moitizi able to secure a welcome top ten for his nation, as he placed eighth, ahead of 2019 Senior Rotax RMCGF champion Axel Saarniala, with Spain’s Vicente Marquez Carpint. 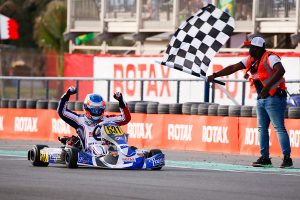 The battle lines were drawn as it was a case of seeing if anyone could dethrone France’s Morgan Riche, who up until the Grand Final had not been given a real stern test. But he braved his way through the Canadian storm that was Pier-Luc Ouellette, who got himself into second and took the runner-up spot and hit the Grand Finals podium for the first time in a decade since his DD2 win at Al Ain Raceway a decade again.

It is a heart-warming story of sheer guts, as he fought hard with intense motivation to live life to the fullest after his boating accident last year.

Ouellette gave the #531 a something to think about, as Paul Louveau had a difficult start from the front row, which initially dropped him to fifth going into the first corner. But Riche could not be touched and would take the title, 1.783 seconds ahead of the #524.

Brazil’s Joao Cunha would initially finish fourth behind Louveau, but the latter was hit with a front fairing penalty that dropped him to 11 th . Nevertheless, Louveau showed us a glimpse of what the future holds in store for the 2021 RMCET Champion, Daniel Schollenberger would taker fourth, having started eighth, ahead of Latvia’s Henrijs Grube. The USA would also have another driver in the top ten in a grand Final this year, as Derek Wang was able to secure sixth, ahead of Chile’s Rodrigo Eckholt. Switzerland’s Michael Hitchcock was able to put on a showcase at the Bahraini circuit, but would this time have to settle for eighth position, with Finland’s Antti Ollikainen and Bahrain’s Mohammed Matar rounding out the top ten.

Team France would win the Nations Cup for the second RMC Grand Finals in a row following on from Sarno in 2019, meaning that “La Marseillaise” would be played for a third time. The Netherlands would hit the runner-up spot, whilst two-time Nations Cup champions Canada would round out the podium.

After our adventure here in Bahrain, it was officially announced that the 22 nd running of the Rotax MAX Challenge Grand Finals will see a return to the Kartodromo Internacional do Algarve in Portimao, Portugal for the fourth time in RMCGF history.