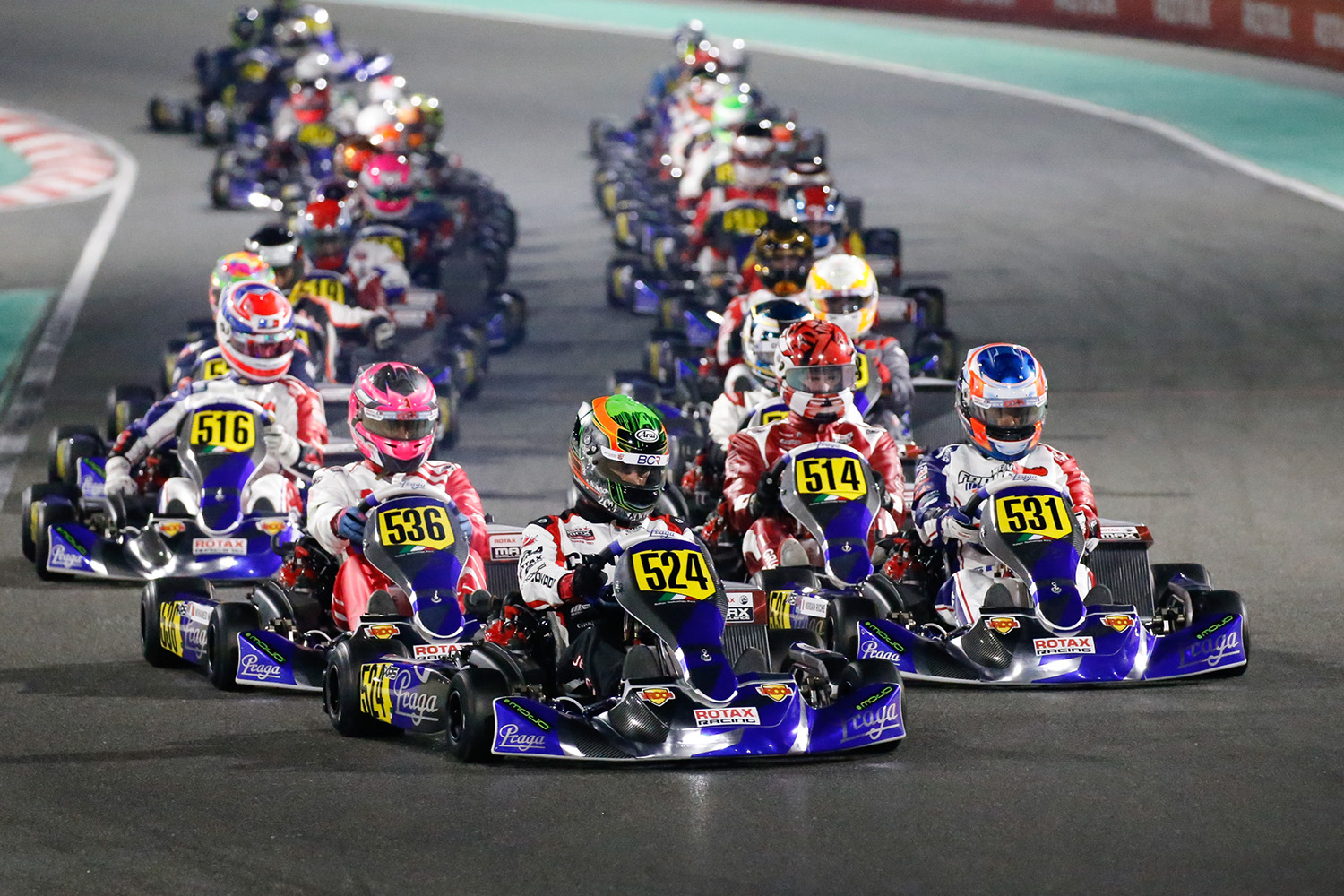 Once more, the powerful new RMCGF family member, the Project E20 E-Kart category started the track action this morning ahead of the other classes – Micro MAX, Mini MAX, Junior MAX, Senior MAX, DD2 and DD2 Masters. We felt the heat, not only from the weather but also of the competitors who were highly motivated and excited to start into the first heats of this week. We saw a lot of thrilling action at the track beginning from the youngsters in the Micro MAX category up to the “Seniors” of the DD2 Masters category, they do not give in easily, they put up a fight.

Stay tuned for further action and watch our Live Stream on YouTube starting tomorrow at 10:10 local time (AST), when the heat racing continues. If you missed today’s Live Stream, just visit our YouTube channel ‘rotaxkarting’ where you can also find today’s video of our new RMCGF family member, the Project E20 category.

Let’s not keep you waiting, here is the race report of today’s Q-Practices and the Q-Heat under the floodlights:

The final Non-Qualifying Practice session saw the closest top three out of all seven that have taken place, as Denmark’s Malte Ebdrup going fastest after the 7-minute session with a 53.901, just 0.01 seconds ahead of France’s Oscar Pellemele (53.902). Theo Kekati from the UAE again showed how tight the competition is on the E-Karts by posting a 53.906 to take third, with the top 13 covered by 0.886 seconds.

The first ever E-Kart race at the RMC Grand Finals started the racing action in earnest, as Project E20 made history by becoming the first Rotax class to race under the floodlights. Theo Kekati managed to keep a cool head on his shoulders to take the victory by 1.030 seconds, after a captivating race to the chequered flag after eight laps.

A three-way battle between the Emirati, France’s Pellemele and Finland’s Jalava got very close for the majority of the race, where at one point, even Eliis Spiezia (USA) and Hannes Morin (Sweden) were in contention. Both Jalava and Morin would go off track during proceedings, compromising their initial efforts. Pellemele would finish in second, beating Poland’s David Aulejtner to the line by only 0.001 seconds, with Spiezia and Jalava completing the top five.

Hungary’s Nimrod Nogradi completed a dominance of all seven practice sessions for Micro MAX in Sahkir, going top of the times with a 1:01.525, ahead of Nikita Ljubimov from Estonia (1:01.662). Lithuania’s Ainis Vibriantis made sure that the distance between third and first was only 0.215 seconds, posting a 1:01.740. The session was also close between the top 27, as just under 1.1 seconds separated them after the 10-minute session.

The UAE’s Zain Elhommossany showed both skill, grit and determination to seal the victory in Qualifying Heat 1 by a mere 0.058 from the Czech Republic’s Zdenek Babicek, with a fantastic outside overtake on the penultimate lap of the race, having started ninth. Nikita Ljubimov from Estonia would be able to hold on to third at the end of 6 racing laps. The top twelve drivers at the finish were covered from front to back  by just under 1.5 seconds, showing how close the drivers are at the front of the field.

In a shortened final practice for the Odds, Lithuania’s Dovydas Gudelevicius was fastest on a 58.420, ahead of Great Britain’s Scott Marsh (58.588) by 0.168 seconds. Endo Arata from Japan completed a close top three in the Bahraini morning heat, posting a best effort of a 58.629 in the process. 86 thousands of a second covered the top three in Evens, with the Netherlands’ Mees Houben leading the way on a 58.370, followed by Lebanon’s Christopher El Feghali (58.440) and the USA’s Gage Korn (58.456).

In Qualifying Practice for the odd numbered drivers, Poland’s Rostyslav Kostyna would end up fastest in the session by 0.005 seconds ahead of Japan’s Endo, with both drivers setting a 58.269 and a 58.274 respectively. Mathis Carnejac from France rounded out a top three that was covered by just over a tenth of second, as the #147 posted a 58.376. Canda’s Jensen Burnett would set the fastest overall time in the Evens group shortly afterwards, bettering Kostyna’s efforts by 0.030 seconds with a 58.239, in front of Lithuania’s Markas Silkunas (58.307) and Poland’s Borys Lyzen (58.326)

The first Qualifying Heats for Groups A + B saw a solid Polish 1-2-3, courtesy of Borys Lyzen, Juliusz Ociepa and Rostyslav Kostyna. Lyzen would take the win having started third, Ociepa sixth and Kostyna would only drop one position, as Carnejac was able to keep pace setter Burnett, with the Canadian ending up fifth. A great battle between both Arata and Lthuania’s Markas Silkunas for Group C +D ended up with the pair less than a tenth apart at the chequered flag, pulling a slight advantage over Mateja Radenkovic in third, as the #108 was 1.047 seconds off the eventually winner. Behind the Belgian, Latvia’s Toms Strele took a solid fourth place finish, whilst the Netherlands’ Max Sadurski moved up six places from 11th to complete the top five.

Belgium’s Kaï Rillaerts would be able to put himself on the top of the times in the final Odds practice session with a 54.720, 0.108 seconds ahead of France’s Teo Blin (54.828). Bruno Mulders from the Netherlands would round off the top three, just 0.001 seconds behind Blin with a 54.829. Tomass Stolcermanis from Latvia is the second driver this RMC Grand Finals to top all practice sessions he has been in, being fastest in the Evens with a 54.762, 0.042 seconds off Rillaerts’ best effort in the other group. The Netherlands’ Matthijs Terlouw (54.806) and another Latvian in the form of Edgars Vilcans (54.917) completed the top three.

Rillaerts would go on to take the top spot in Odds Qualifying Practice with a 54.545, where the top three were separated by only 59 thousands of a second, courtesy of the Netherlands’ Joep Breedved (54.596) and Slovakia’s Matej Konik (54.064). But Stolcermanis powered his way to the fastest time overall by 0.37 seconds in the Evens session, posting a 54.175, with the top three covered by 0.056 seconds, with Harry Linden from Great Britain (54.226) and Russia’s Mark Koziaev (54.231) following in second and third after the Latvian.

Stolcermanis would stamp his authority in Qualifying Heat 1 for Groups A & B, taking an early lead in proceedings, whilst everyone else battled behind him. Rillaerts would also stay the course in second place, ahead of France’s Teo Blin, after starting sixth on the rolling start. Matej Konik kept a hold of fourth place, with Lithuania’s Maxim Shchurko over four seconds behind the Slovakian to take fifth. Harry Linden would hold onto win Qualifying Heat 1 for Groups C & D by 1.284 seconds in front of Edgars Vilcans, whilst Italy’s Pietro Pons stormed up to third from twentieth, followed by the Dutch pair of Jayden Thien and Enzo Bol.

In Qualifying Practice, it was another shining moment for Bradshaw in the afternoon sun, as the Briton would not only set the fastest time in the Odds session, but the best time of all 72 drivers overall with a 53.292. However Kai Hunter was just 0.013 seconds adrift in second (53.305), followed by Serbia’s Andrej Petrovic, who put in the third fastest time with a 53.346. France’s Paul Fourquemin was the top driver in Evens, putting down a marker of a 53.372-second lap time for the rest to chase. Tereza Babickova from the Czech Republic was second on a 53.454, ahead of Great Britain’s Clayton Ravenscroft (53.467).

Qualifying Heat 1 for Groups A & B upped the excitement of close-quarter racing under the floodlights, as a fantastic battle surged its way around the circuit under the night time sky that saw Paul Fourquemin emerge victorious after a close-quarter encounter with Serbia’s Andrej Petrovic, with the pair finishing 0.256 seconds after 10 enthralling laps. Bradshaw did initially lead the way, before the sand on the circuit saw the Briton run wide to drop to sixth, but recovered well to take third at the flag. Clayton Ravenscroft would also feature at the sharp end of the field, whilst Sweden’s Wilgot Edqvist completed the top five.

The first action for Groups C & D was even more dramatic, as Great Britain’s Mark Kimber was able to fight off at least 15 other drivers to win the 10-lap race by 0.116 seconds from Tereza Babickova with Sean Butcher rounding out the top three, as the top 25 drivers were covered by just over 5 seconds at its conclusion. Despite being in the battle for the lead at one point during the race, Kai Hunter made it three Britons in the top four, whilst the UAE’s Lachlan Robinson recovered from an early skirmish to reclaim fifth at the finish.

David Maslakiewicz was quickest for the Odds in the final practice session, posting the best time of a 52.552, where the top three were within 28 thousands of a second of each other. Vaserlis Dimitris (Greece – 52.570) narrowly missed out by 0.018 seconds behind the Pole, whilst the Netherlands’ Martijn Van Leeuwen was a further 0.010 adrift, having put in a best effort of a 52.580. In Evens, Emils Akmens from Latvia would go faster than the other 35 drivers with a 52.790, with the Czech Republic’s Eliska Babickova (52.893) a further 0.103 behind. Axel Saarniala would also feature in the ­top three, as the Finn would put down a best time in the session of a 52.907.

In Qualifying Practice for the Odds, France’s Antoine Barbaroux would post the fastest overall time for the 72 drivers in attendance, putting down a marker of a 52.081, pushing the gap between himself and Chile’s Gustavo Suarez in second position (52.313) to 0.232 seconds. Italy’s Michael Rosina was able to grab third with a 52.349. Odds saw Canada’s Gianluca Savaglio take the top time in the session, ahead of Patriks Noels (52.387). It was a 2-3 for Latvia, thanks to Emils Akmens, whose best effort of a 52.388 secured third, 0.001 seconds adrift.

Barbaroux would then go on from his efforts in Qualfiying Practice to comfortably take the win in Qualifying Heat 1 for Groups A & B by 1.390 seconds, setting the fastest lap in the process. Van Leeuwen was also looking pretty racy to find his way to second position, as India’s Kyle Kumaran rounded out the top three, a further 0.281 seconds behind, whilst Michael Rosina and Gianluca Savaglio rounded out the top five. Greece’s Vasileris also secure his first win in the heats as Groups C & D battled it out in the heats, taking the chequered flag 20.45 second ahead of Chile’s Gustavo Suarez, followed by Belgium’s Glenn Van Parijs in third. Dawid Maslakiewicz was able to secure fourth, as Sweden;s Charlie Andersen edged out Patriks Noels Locmelis.

France’s Morgan Riche (53.362) would fractionally edge out Argentina’s Matias Rodriguez (53.386) by 0.024 seconds in the final practice session, as Bahrain’s Mohamed Matar still showed that the #536 could be one to clearly watch this week on home soil, posting a 53.485 to take third.

Canada’s Pier-Luc Ouellette was the driver to secure pole position in Qualifying Practice with a 53.034, narrowly grabbing the top time by 0.013 from Riche in the #531, whilst local driver Mohamed Matar rounded out the top three with a 53.075, where they were covered by only 0.041 seconds.

But the end of the day would belong to Riche, who was battling hard against both Ouellette and France’s Paul Louveau during the 10-lap encounter. Riche would end up sealing the victory by 0.178 seconds ahead of the Canadian, whilst Louveau would fend off the hard charging duo of Latvia’s Henrijs Grube and the USA’s Derek Wang, with the pair both vying for a spot in the top three but coming up short.

Stay tuned for our upcoming daily reports, which bring the intense and exciting on-track action of the RMCGF to you!