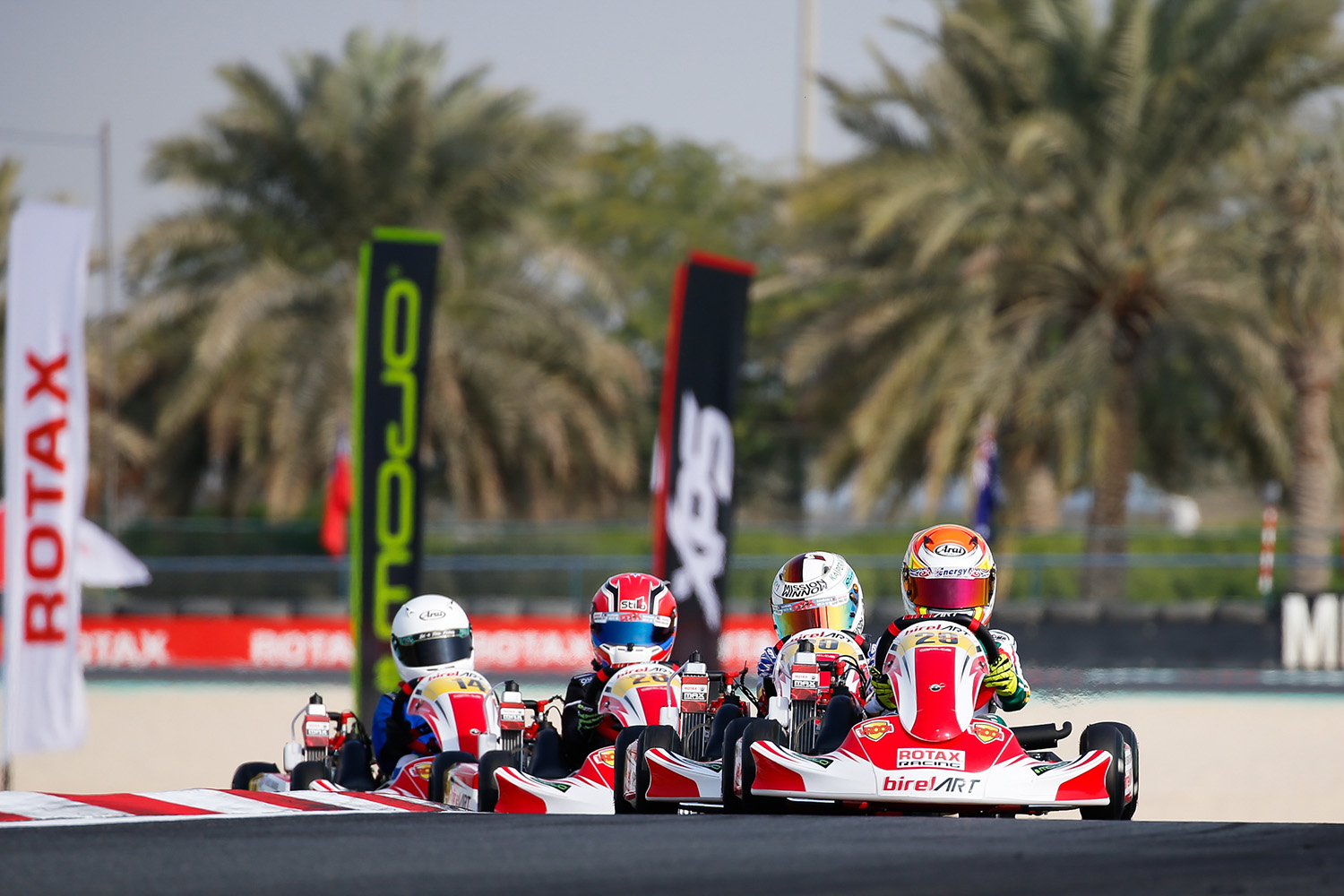 After a very windy day yesterday, today the track greeted  us with bright sunshine with no real breeze apparent. We take a short look back to yesterday, where Non-Qualifying practice started, and the first action took place under the floodlights and the night sky.

Today, the action started with the first NQ-practice sessions at 08:30 (AST) with the Project E20 E-Karts which silently brought us into the race mood for the day. After the E-Karts, the Micro MAX took the spell at the wheel followed by Mini MAX, Junior MAX, Senior MAX, DD2 and DD2 Masters. And yes, after these first two days, we are so happy to be back with our worldwide Rotax family!

We’ll keep you up-to-date about all the happenings here in the Middle of Bahrain at this fantastic venue with Daily Reports, in our Social Media Channels and on our YouTube Channel with highlight videos and the Live Stream.

Don’t miss the chance to join us on the Live Stream and watch our Live-Studio from the BIKC in Bahrain. Today we welcomed Ferdinand Habsburg and answered a lot of your questions from the Social Media Channels. Follow us and stay tuned for the next action.

Let’s have a look back at today’s practice sessions:

Nimrod Nogradi would continue with business as usual after yesterday’s practice sessions,, topping the first session of the day with a 1:01.189, 0.561 seconds ahead of Japan’s Taigen Sakano (1:01.750). Zain Elhommossany (UAE – 1:01.764) completed the top three drivers a further 0.014 seconds behind.

The Hungarian would then also do the same in the second session, posting a 1:01.363, ahead of Tom Papenburg from the Netherlands (1:01.711). Lithuania’s Ainis Vibriantis (1:01.831) would round out the top three, who were covered by 0.468 seconds. Nogradi has been at the sharp end of the field for all the NQ Practice sessions so far, and repeated that in the final time out on track today, showing consistency with a 1:01.347, ahead of both Poland’s Antoni Ocipea (1:01.728) and Estonia’s Nikita Ljubimov (1:01.870), who completed the top three.

France’s Teo Blin would start the day off on the right foot taking the top spot in the first session for the Odds, posting a 54.745, ahead of Hungary’s Muhammad Wally (54.785), whilst Great Britain’s Ethan Jeff-Hall completed the top three on a 54.800. Meanwhile, Latvia’s Tomass Stolcermanis (54.520) was quickest in the even-numbered drivers’ first practice of the day, leading the pair of Germany’s Farin Megger (54.530) and the UAE’s Frederico Al Rifai (54.587).

Blin (54.734) would also be quickest in the second Odds session of the day, bettering his previous lap time by 0.011 seconds, ahead of the duo of Bruno Mulders (Netherlands – 54.812) and Belgium’s Kaï RIllaerts (54.827). Stolcermanis topped the timesheets again in the second Evens session, pushing the laptimes down in the process to a 54.538, followed by Hungary’s Aron Krepscik (54.583), with Cem Argun from Austria completing the top trio with a 54.610.

Dutch driver Enzo Bol would take the top honours in the final session of the day for the Odds with a 55.051, followed by countryman Bruno Mulders, who was just 9 thousands. Slovakia’s made it into the top three, posting a best time of a 55.141. Stolcermanis closed out another solid day of running with the top time in the odds, putting in a 54.547, followed by the pairing of Slovenia’s Nik Trobec (54.627) and Sweden’s Sebastian Svensson (54.709).

Great Britain’s Callum Bradshaw again topped another session, this time in the first one for the Odds by posting a 53.485. Kenta Kumagai (Japan – 53.651) was close to the Briton’s time, but ended up 0.166 seconds slower in second, Portugal’s Joao Oliveira thereby completed the top three with a best effort of a 53.655. It was another British driver at the top of the Evens timesheet in the first practice in the form of Mark Kimber (53.556), with both Kuwait’s Fahad Al Khaled (53.577) and Great Britain’s Sean Butcher (53.651) in the top three.

Bradshaw would make it two sessions in a row at the top of the times in Odds with a 53.604, not far ahead of the pair of Hungary’s Zsombor Kovacs (53.690) and Great Britain’s Rhys Hunter, who closed out the top three with a 53.721. It was the turn of Sean Butcher from Great Britain to top the times with a 53.839 in Evens for their second session, where the top 30 were covered by less than 6.5 tenths. Paul Forquemin (France – 53.859) and Mark Kimber (Great Britain – 53.876) would end up completing the top three.

Maslakiewicz would be fastest in the second session for Odds with a 52.707, followed by Dimitris from Greece (52.708), with a thousandth separating the pair. Van Leeuwen has shown great consistency in practice so far, and stayed in the top three again with a 52.759. Andersen would take a turn as fastest in Evens, putting in a best effort in the second session with a 52.838, ahead of Latvia’s Locmelis (52.889) and Lebanon’s Matthias Njeim rounding out the top three on a 52.898.

Van Leeuwen posted the best time of a 52.373 in the final Odds session, ahead of Dimitris (52.487) and Maslakiewicz (52.522), where the top three were covered by 0.149 seconds. Axel Saarniala from Finland was top of the times in the final Evens session of the day, with Vincente Marquez Carpint (Spain – 52.641) and Charlie Andersen closing out the top three.

The first session of today’s NQ-Practice for this class saw Agentina’s Matias Rodrigues end up fastest with a 53.168, ahead of Frenchman Morgan Riche (53.371) by 0.203 seconds after the 10-minute session. Bahrain’s Mohamed Matar (53.460) was able to hold off Finland’s Antti Ollikainen by only 0.025 seconds to round out the top three.

It was three different nations at the top of the times after the final free practice for the class, as Bahrain’s Mohamed Matar taking top honours with a 53.181, ahead of Riche (53.206) and Latvia’s Eriks Gasparovics, who took third with a 53.287.

Stay tuned for our upcoming daily reports, which bring the intense and exciting on-track action of the RMCGF to you!