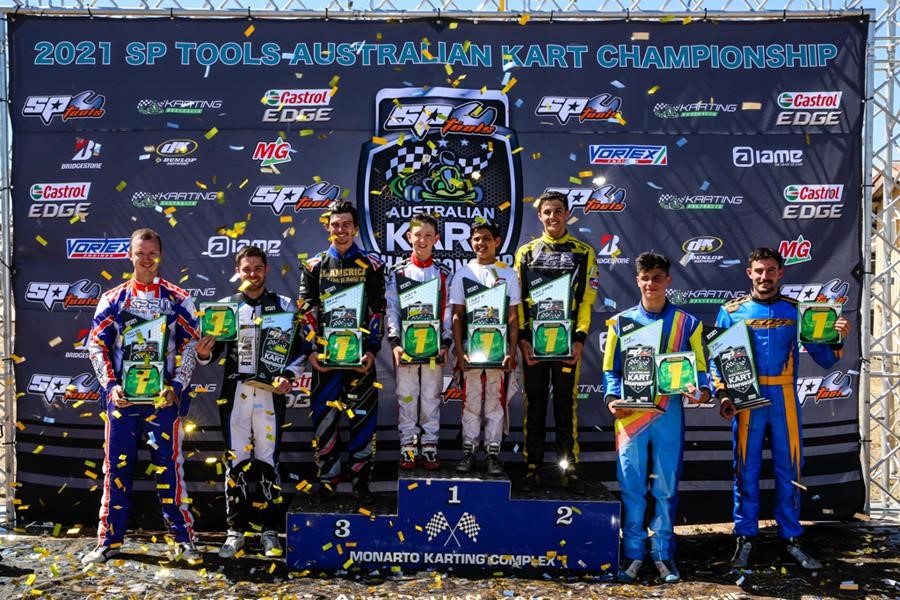 Troy Loeskow has successfully defended his Australian KZ2 Championship at the final round of the SP Tools Australian Kart Championship, presented by Castrol EDGE in South Australia, while Brad Jenner also went back-to-back in X30 and Brendan Nelson secured his seventh career Australian Karting Title on Sunday afternoon when the nine Champions on offer were crowned.

Loeskow had amassed enough points on Saturday to be crowned Champion-elect, but put the exclamation point on it in the 25-lap Final taking his Patrizicorse Ricciardo Kart to a dominant victory.

Saturday’s polesitter Bailey Sagaidak didn’t finish after a collision while he was battling for a podium finish.

John Grother took out the round win in the KZ2 Trophy class – coming agonisingly close to his first Australian crown in 20 years, however a collision early in the race saw him not finish and the overall win was handed to Scott Chaston.

Brad Jenner added to his career Australian Title tally with his second consecutive Title, winning out the final by 1.5 seconds. It was one of the Championships that went to a Title decider this afternoon and he was able to do enough to stave off the challenges of Jace Matthews and Jacob Dowson for the biggest haul of points to be awarded the James Courtney Perpetual Trophy in front of the aforementioned two.

Harrison Hoey drove his Parolin from 12th on the grid to finish in second position and Matthews fought valiantly trying to win two Championships to bring his FA Kart home third.

It was better news for Matthew’s in KA3 Senior completing a perfect weekend with a 3.842 second victory in the final over Nicholas Sacco – who, in a Championship first, created a dead heat with Benito Montalbano. On countback, Sacco got second, but Montalbano’s effort had to be commended – he started the final from 22nd which secured third in the Championship for the Sydney-based PCR driver. James Sera took the fight to Matthews throughout the weekend for the Championship however a collision in the final put pay to the slim chances he had of taking another Title for the Sera family.

Brendan Nelson secured his seventh Australian Championship in TaG 125. The battle between Nelson, Reuben Goodall and Cody Brewczynski was fierce throughout the weekend, however the Exprit Kart driver was supreme in the Final, winning by 1.6 seconds.

Leigh Nicolaou had one of his most consistent weekend’s in AKC competition in some time, snaring the final heat on Sunday morning when the Championship combatants were squabbling and edging Brewczynski for second in the Final.

Goodall got past Brewczynski for second in the Championship, which was a solid first year senior effort for the South Australian.

In the KA2 Junior category, the Finale put up a tantalising prospect in the battle between Leon Cordato and Costa Toparis. The onus was on Toparis to win the Final. If that happened and Cordato didn’t finish, the Goulburn-based EVOKart driver would win the Championship.

Toparis kept up his end of the bargain – charging to the front in fine style, meantime, Cordato played the conservative game – at one point almost too conservative when he was in the middle of a three wide, mid-pack charge to turn one.

Jake Rutkowski threw a late challenge to Toparis, but couldn’t get by, Peter Bouzinelos finished third and by virtue of a sixth placed finish, Cordato won his first Australian Championship and added his name to the Jon Targett Trophy alongside many great Junior Champions that have achieved success on the international motorsport stage. Despite having to move to Seniors due to age, Jordan Shalala had gained enough points to be awarded third in the Title.

In KA4 Junior, Alex Ninovic had the Title sewn up before an engine was fired on Sunday, but he had his best run in the Final pushing for a podium finish for much of the race. That wasn’t to be, as he finished fourth, but the driver that dominated the weekend, Ryan Macmillan wouldn’t be denied, winning by 3.4 seconds over Ben Munro and Michael Janusz.

Macmillan’s weekend elevated him to third in the Championship overall and Munro’s haul of points snared him second in Australia.

Emotional scenes erupted around the Monarto track on Sunday afternoon in Cadet 9 when South Australian driver, Dominic Mercuri took South Australian manufactured chassis, Omega to the top step on home soil. It is the first time since 2016 that an Omega Kart has visited a podium in an Australian Kart Championship round.

Mercuri got to the front at turn one after a multi kart incident saw Champion, Sebastian Eskandari-Marandi spun and sent to the back of the field. From there the young South Aussie wasn’t headed, winning by 4.9 seconds over Cruz Kelly – who, following in the wheeltracks of the well known motorsport family, had his best AKC finish and Energy driver Caylen Burke.

Eskandari-Marandi hasn’t been defeated in a Final all year and staged an impressive comeback to finish in sixth placing. He won the Championship before even hitting the track at Monarto, with Alaster Flack second and Zack Hilder third.

Cadet 12 was another hectic affair. Jenson Burns survived several opposition attacks to win over Lewis Francis and Ky Burke. Francis wrapped up the Championship through his second position with Jaxson Burns and Zack Hilder completing the top three.

In post event presentations, Aiva Anagnostiadis was awarded the Ladies Trophy for scoring the most points of the female competitors in the Championship, Shamick Racing took the Teams’ Championship over PCR and Patrizicorse. It was a double win for Shamick as the importer of the Parolin chassis that took out the Manufacturer’s Trophy.

This weekend’s host club, the Go Kart Club of South Australia won the highly sought after event of the year while Alpha Motorsport was awarded the Best Presented Team Award.

The SP Tools Australian Kart Championship, presented by Castrol EDGE will take an hiatus until February 25-27 2022 when it returns to Victoria for round one and the action starts all over again.

An on-demand stream from Sunday’s action can be viewed here, while full results from the Australian Championship decider can be accessed here