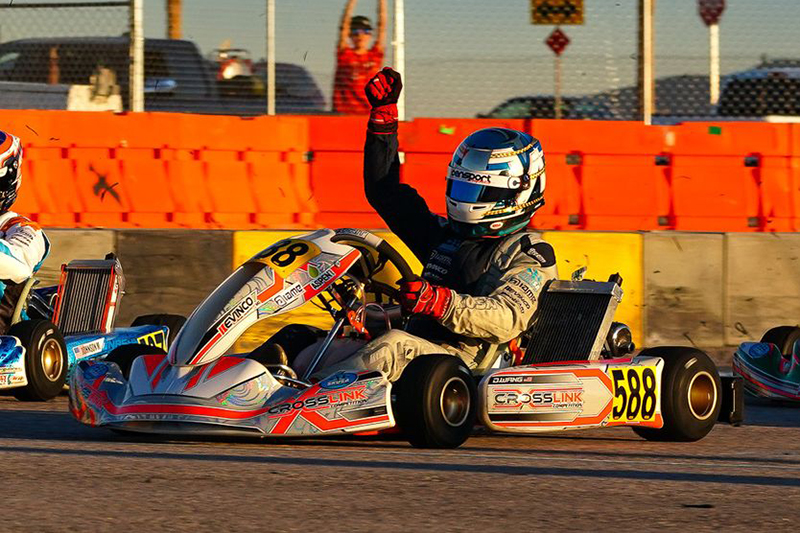 It was a winning weekend for Team Crosslink in Las Vegas. Taking on the Superkarts! USA (SKUSA) SuperNationals, Team Crosslink and Derek Wang conquered the temporary circuit at the Las Vegas Motor Speedway to win the X30 Master class at the biggest karting event on the North American calendar. Saving his best result for the final on track session, Wang worked his way to the front of the field to take the win by the slimmest of margins.

Reilly Cann and Alex Stanfield kicked off the main events for Team Crosslink as the KA100 Senior field was the second group on the track for their final. Progressing through a twenty-lap event that featured a red flag on lap nine, Reilly Cann scored the team’s best result with a 14th place finish while Alex Stanfield ended his weekend in P17. Following the main event and after on track penalties had been applied, Stanfield would fall back to 18th while Cann would be classified in 20th.

In the KA100 Junior class it was the duo of Aden Rudolph and Brayden Robertson who climbed the results sheets on Super Sunday. Forced to start deep in the field due to some issues in the heat races, Rudolph was able to gain five spots to move forward to a 12th place result as Robertson gained the most positions in 20, to finish just behind Rudolph in 23rd to close their SKUSA SuperNationals.

Lewis Hodgson would join Alex Stanfield in the X30 Senior main event and looked like he could contend for a solid result. Starting 26th, Hodgson worked his way into the top-ten before the mid-race distance and looked to have the speed to move forward even more before disaster would strike and he was sidelined with just three laps remaining. Stanfield was able to climb nine positions in his second main event of the day turning his outside row ten starting position into an 11th place result when the final checkered flag flew.

Luis Gautier was the lone gearbox pilot for Team Crosslink as he battled hard in the Master Shifter class. With some struggles through the heat races and beginning the main event in 18th, Gautier was able to level up six positions and cross the line for a solid 12th place finish.

The final trio of Team Crosslink drivers would hit the track late in the day as the second to last class on the schedule, but it was worth the wait for Derek Wang. Starting second and with the pace to challenge at the front of the field, Wang battled hard inside the top-five, falling back and moving forward as the race progressed on. Taking the lead late in the race and leading the lap that counted the most, Wang took the X30 Master SKUSA SuperNationals title by a scant .078 when the checkered flag flew. Miguel Mier put a pair of Team Crosslink drivers in the top-ten with a tenth-place result as Armando Watson put three in the top-15 earning 13th on the results sheet.

“What a weekend for the team with a ton of ups and downs across the board,” explained Sean Owens. “We battled hard and felt like a lot of things went our way but on the other hand, they didn’t. We never gave up and worked hard until the very last session. The goal was to win but to make it happen is awesome. Team Crosslink and Derek Wang are SKUSA SuperNational Champions.”

Team Crosslink will immediately work on their 2022 program with testing and new driver announcements on the horizon. Stay tuned for a winter race schedule coming soon. For more information on the Team Crosslink karting, F4, and FR programs as well as the Team Crosslink Academy Days, contact Sean Owens via email to Sean@crosslinkcompetition.com.