Situation Saturday plays out at the Las Vegas Motor Speedway 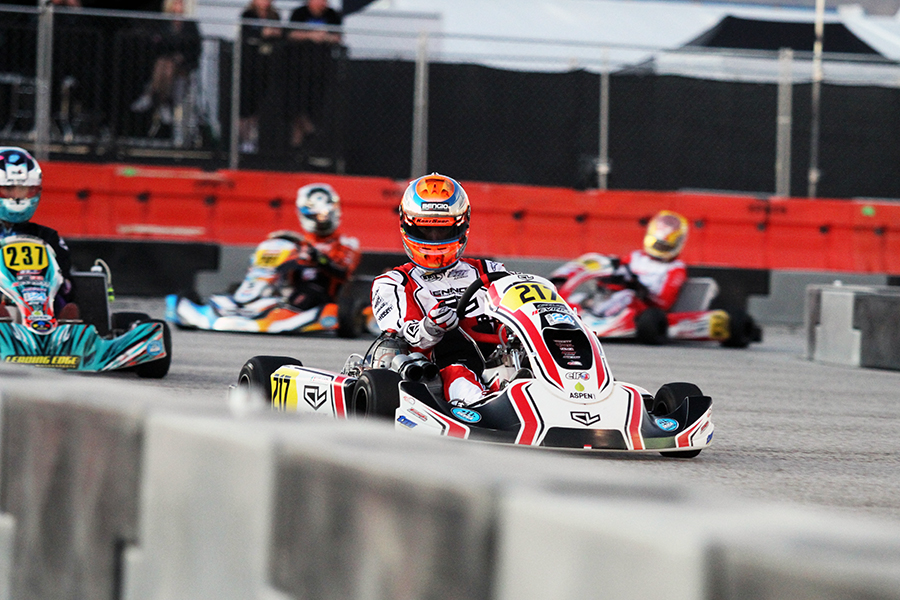 One of the more important days of the Superkarts! USA SuperNationals is Saturday. The term ‘Situation Saturday’ was coined by guest announcer Chris Wheeler during one of the previous SuperNats, and continues on with the 24th edition of the event in Las Vegas. The final round of heat races were conducted outside the Las Vegas Motor Speedway along with the Last Chance Qualifiers for the final few spots of the grid on SuperSunday to crown this year’s winners.

The morning categories began with the KA100 Senior division and a third straight win by Cole Morgan (RPM / Tony Kart). The top qualifier was able to hold off brother Carson Morgan (RPM / Tony Kart) for the win in AvsB heat race to secure the pole position for the final. The CvsD heat was won by former SKUSA Pro Tour champion Brandon Lemke (FMS / Merlin) who beat out Blake Nash (Nash / EOS). Thomas Annunziata (MDR / Kosmic) finished third, and will start the main event from outside the front row. Carson Morgan and Lemke fill out the second row. Max Opalski (RPM / Tony Kart) won the LCQ with Pro Tour vice-champion Jace Park (TKG / Kart Republic) and Nolan Allison (RPG / Kosmic) needing to use their provisional spots for the main event. 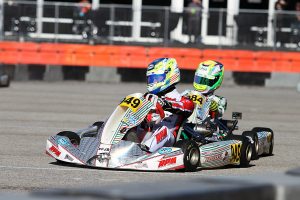 Cole Morgan won all three of his heat races in KA100 Senior, including Heat 3 on Saturday (Photo: EKN)

Noah Baker (Supertune / Tony Kart) came away with the win in Heat #3 for the KA100 Junior division ahead of Salim Hanna (RPG / Kosmic). That finish with a runner-up and DNF puts him ninth on the grid as third-place finisher Jeremy Fletcher (TF / Tony Kart) will lead the field to the green flag thanks to his two heat race wins on Friday. Hanna will go from outside row one with Helio Meza (IRM / Tony Kart) and Cole Kleck (Arcane / Tony Kart) starting from row two.

Oliver Kinnmark (Parolin USA) went three for three on the heat races in the Mini Swift category. Kinnmark advanced up to the top spot in the AvsB heat race ahead of Roman Kamyab (Orsolon / Tony Kart) to secure the pole position for the main event. The CvsD heat race was won on track by Diego Ardiles (Supertune / Tony Kart) only to be penalized five seconds for contact. That promoted Christian Costoya (Parolin USA) to the top spot ahead of Sebastian Wheldon (JC / Kosmic) and SKUSA Pro Tour champion Enzo Vidmontiene (Benik). Starting alongside Kinnmark for the main event is Asher Ochstein (Supertune / Tony Kart) with three top-five finishes. Tyler Roberts (Parolin USA) and Wheldon will go from row two. 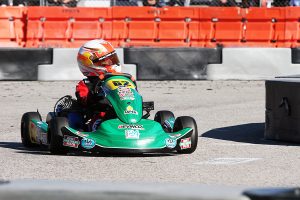 Also going three for three on the heat races in Micro Swift was Keelan Harvick (Nitro Kart). Harvick drove to a third heat win to close out the morning session and secure the pole position for the main event. Top qualifier Ethan Tovo (Nitro Kart) finished second with SKUSA Pro Tour champion Gianmatteo Rousseau (Nitro Kart) in third. They will start the SuperSunday main event from those same positions with Phaethon Saradpon (Kart Republic) in fourth and Royce Vega (Benik) starting the Final from fifth.

The X30 Junior class opened up the afternoon divisions with another action-packed heat race of 10 laps. Caleb Gafrarar (RPG / Kosmic) was able to get away on the final circuit to cross the line first, only to be given a penalty for contact with Jeremy Fletcher (TF / Tony Kart). Fletcher was given the win while Gafrarar was classified eighth. Max Garcia (MPG / WPK) and Justin Adakonis (MDR / Kosmic) were second and third. Adakonis, with three top-four finishes, will lead the field to the green flag as top qualifier Noah Baker (Supertune / Tony Kart) starts from outside pole position. Two-time heat winner Jorge Ortiz (Supertune / Tony Kart) finished 11th in Heat #3, to go from P3 for the main event with Garcia alongside. Fletcher is slated to start fifth with Gafrarar back in ninth. 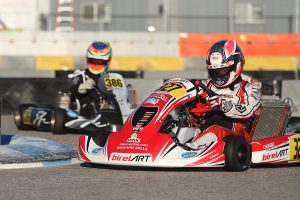 Renato Jader David (Orsolon / Tony Kart) kept his perfect run on the event with a third heat race win. The top qualifier drove away to a 1.4-second win as Martin Pierce (FDM / CompKart) held off Derek Wang (Crosslink / Exprit) and Matt Johnson (Nash / EOS) for the runner-up spot. RJD and Wang fill the front row for the main event with Pierce and Johnson in row two. 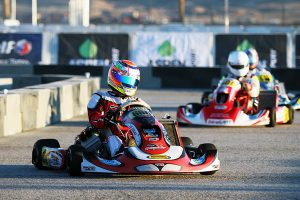 Joey Wimsett led all 10 laps of the third heat for Master Shifter, and will launch from P5 for the main event (Photo: EKN)

Joey Wimsett (DRT / DR Kart) did what he needed to do to help move him up the grid for the Master Shifter grid. After a DNF in Heat #1 for a broken shifter lever, Wimsett won Heat #2 and did the same on Saturday in the final heat. He led Jordon Musser (PSL / Birel ART) and Ryan Kinnear (PGR / Ricciardo) to the checkered, with those two drivers lining up on the front row for SuperSunday. Wimsett will go from P5 as John Crow (Factory Karts) and Joe Ruch (HMG / Race Factory) launching from row two.

The final race under the lights for SuperNationals 24 was the Pro Shifter Heat #3. Matteo Vigano (PSL / CL) was able to secure the top spot by the halfway point, driving away to a 0.6-second advantage over a charging Marjin Kremers (PSL / Birel ART). 2019 KZ winner Danny Formal (LEM / Formula K) held third with Riccardo Longhi (PSL / Birel ART) up to fourth and Brent Crews (LEM / Formula K) holding onto fifth. Top qualifier AJ Myers (Magik Kart USA) fell to eighth in the closing laps, and will start from 13th. Vigano and Formal start from the front row with Kremers and Jake French (PSL / Birel ART) launching from row two.

Action for SuperSunday to crown the SuperNationals 24 champions begins around 11am PST following opening ceremonies with the nine main events to be contested outside the Las Vegas Motor Speedway.