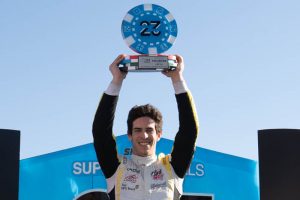 The TaG (Touch and Go) concept was introduced in the early 2000s here in the United States, and brought into the SuperNationals in 2003. It wasn’t until the 2008 edition outside the RIO that the TaG Senior division really became a headline category, welcoming 95 entries. Since then, the class has been open up to the 88-max drivers and welcomed a number of experienced, successful pilots from all across the world. In fact, USA drivers have only won six of the last 17 main events on SuperSunday with eight different countries represented over that time. At 86 drivers, this year’s SuperNationals field is among the deepest in terms of talent, experience, and the among those who could be in contention.

In the 17-year history of the X30 Senior (TaG Senior) category at the SuperNationals, no driver has been able to repeat or win for a second time. There are three drivers who have that opportunity. Defending race winner Zachary Claman-Demelo comes in with a solid resume at the SuperNationals. A runner-up in 2016 and 11th in 2018, ZCD pulled off a third to first move on the final circuit to claim his first SuperNationals victory in 2019. The Canadian is coming in with a new team and different chassis, running under the history Genesis Racing name aboard their Atomica chassis brand. Jake Craig and Marco Maestranzi are the other two race winners in the field. Craig (RPM / Tony Kart) has not missed a SuperNationals since 2011 with five top-10 results, including a dramatic win in 2016 and ninth in 2019. In the last five SuperNats, the winner has come from starting inside the top-10. In 2014, Italian Maestranzi started 24th and knifed his way forward to a 3.2-second margin of victory. He has two other podium results, with his last race coming in 2018 with a 13th position. He now joins PSL Karting aboard the Birel ART chassis, different from the Top Kart colors we are used to seeing. 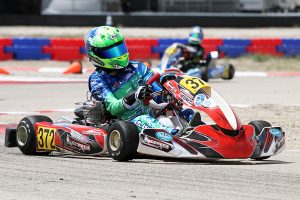 The other three former SuperNationals winners in the field came in the Mini Swift category from 2015 to 2017. The latest is Connor Zilisch (Team Nitro Kart / Tony Kart), who is among the top rookies in the Senior for 2021. Zilisch, the 2020 FIA Academy Trophy champion representing the USA, won at nearly every event he attended, and sits third in the EKN TaG Driver Rankings heading into Vegas. He finished fifth and runner-up in the last two trips to Vegas in X30 Junior. Thomas Nepveu was the first Canadian to win in the Mini Swift category at the SuperNationals in 2016, and is in the top-10 for the EKN TaG Driver Rankings, racing under the Trinity Karting Group aboard a Kart Republic. British driver Jonny Edgar won the SuperSunday event in Mini back in 2016. Racing in the Formula 3 program as a Red Bull Junior Team Driver, Edgar (Benik / Kosmic) will make his first SuperNats start since 2017. 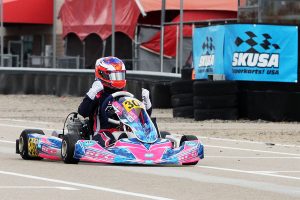 Making history in 2021 was Hannah Greenemeier, as the Rolison Performance Group driver became the second female to win on the SKUSA Pro Tour, first in a headline category, and the second female series champion. The Colorado driver has two starts in X30 at the SuperNationals, placing 12th in 2019, currently second in the EKN TaG Driver Rankings. She was able to better her teammates Branyon Tiner, Ryan Norberg and Nate Cicero in the championship standings. Tiner is scheduled to compete in Vegas, however, rumor is he will not be in attendance. Four-time SKUSA Pro Tour champion and reigning United States Pro Kart Series title winner Norberg won twice on the season but came up short with two DNF finishes. In his four starts at the SuperNats, the current #1 in the EKN TaG Driver Rankings finished in the top-10 three times with a podium result P5 in 2017. Cicero is a SuperNationals rookie, having only one temporary circuit start in his career. That start came at the ROK Vegas event earlier in November, ending with a victory. Momentum is on his side with that victory and winning at the Mazda Motorsports Spec MX-5 shootout in October. 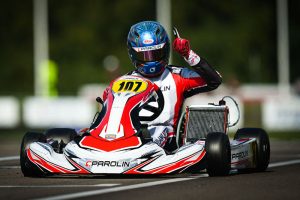 Three former and current world champions reside in the X30 Senior field, all with SuperNationals experience. Italian Lorenzo Travisanutto is the current KZ2 World Cup champion, having won the FIA Karting World Championship in 2018 and 2019. It was in 2017 that Travisanutto helped to launch the Kart Republic brand at the SuperNationals, scoring the on-track victory to only be penalized for a starting infraction, dropping him to fourth. He finished sixth the next year, making his first start in Vegas since 2018 and joining Parolin USA having been factory driver and driver coach all season. The two previous world champions before him will both be in Vegas. 2017 champ Danny Kierle has two SuperNationals starts, placing 11th in 2017 and runner-up last year, fighting for the lead on the final circuit. Those starts were with Fullerton, now making the move to Kart Republic under the Trinity Karting Group tent. 2016 champ Pedro Hiltbrand made his SuperNationals debut in 2018, placing eighth. Racing with PSL Karting / Birel ART, the Spaniard helps add to the depth of the SuperNats 24 field. 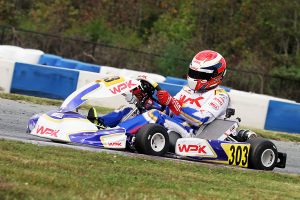 Two drivers will have spotlights on them all week long in Vegas, coming in as NTT IndyCar Series champions. Josef Newgarden and Will Power return to their roots, competing in the X30 Senior division. Newgarden (MPG / WPK) – a two-time IndyCar champ – is making his first start at the SuperNationals, using the USPKS series finale as a warm-up event. Power, the 2014 IndyCar champ, is set to make his fourth start at the SuperNationals. He made his debut in 2013, placing second in the X30 Master division in 2014. Last year, he was 18th after getting dropped to the tail of the field. Now, he’s going against the young guns of the world in X30 Senior for the first.

Aside from the top-two finishers, Brandon Jarsocrak is the only other returning podium finisher from 2019. The four-time USPKS champion finished fifth, his best result in his six starts at the SuperNationals. Jarsocrak has gone winless on the season in both SKUSA and USPKS competition. Other drivers to land on the podium at the SuperNationals without a win include Canadians Cedrick Lupien (RPG / Kosmic) and Ryan MacDermid (Tony Kart). Drivers with success in the lower categories with no victories consist of Colombian Diego Contecha (Orsolon / Tony Kart) placing runner-up in Mini back in 2017, Jace Park (TKG / Kart Republic) finishing fourth in Mini during the 2018 event, and Jamaican Alex Powell who was third that same year in Mini. Powell has been among the top drivers in Europe in the OKJ category, racing with the Kart Republic factory team all season. Now, he moves to the Senior ranks for the first time with Parolin USA. 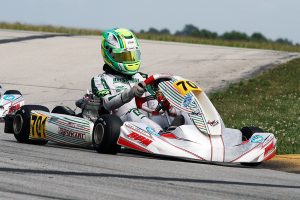 The one driver with the most SKUSA Pro Tour championships is also set to make his Senior debut at the SuperNationals. Carson Morgan (RPM / Tony Kart) has two Mini Swift titles under his belt and won both the X30 and KA100 Junior crowns over the last two seasons. Morgan was the provisional winner in 2017 in Mini Swift before he was removed from the results. Since then, he was 7th in 2018 and competed in X30 Junior for 2019 SuperNationals. Other top Junior drivers from the 2019 event include Max Opalski (RPM / Tony Kart), Canadian Jason Leung (RPG / Kosmic), John Burke (PSL / Birel ART) and Italian Cristian Domenico Bertuca (PSL / Birel ART).

6 – Former SuperNationals winners in the field (3 in Mini, 3 in Senior)

35 – Competitors from outside of the USA