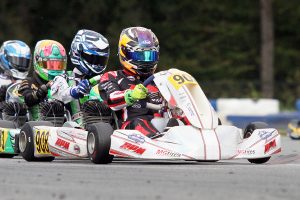 2019 SuperNats winner Pauly Massimino back for another trip to the top of the podium (Photo: EKN)

The KA100 Senior category will boast a record turnout for its third year t the SuperNationals, welcoming 92 drivers. During the first two years of the category at the SuperNats, the class was sold out at the capped number of 44. For 2021, the class was opened to provide two time slots in the schedule and the KA100 driver community has not disappointed with the turnout. This year’s field is a great mix of talent, including 13 drivers returning from 2019, 20 drivers who ran Junior that year, six Pro Tour champions, and over half the field with zero SuperNationals starts.

Of course, defending race winner Pauly Massimino is the opening highlight of the class roster. The 2019 edition was decided after the final checkered flag. Brandon Lemke (FMS / Merlin) put on a show, after getting wrecked on the opening lap to drive forward and grab the checkered flag. A pushback bumper penalty dropped him down to fifth on the podium, moving Massimino up to the #1 spot. A lot has changed over the past two years. Massimino has matured even more as a driver, running now with Ryan Perry Motorsport, and he has become a consistent threat in both KA and X30 competition. Lemke is now among the older veteran drivers at 21, but is still showing like a championship driver. It was six years ago that he won the SKUSA Pro Tour TaG Junior crown at the SuperNationals. For both, it will be about earning what is theirs. 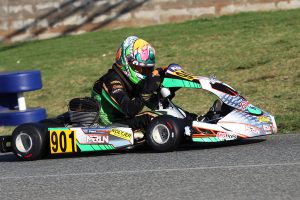 Brandon Lemke is back for redemption after a PBB took the win away in 2019 (Photo: EKN)

This year on the SKUSA Pro Tour was much like in year’s past with a diverse set of drivers fighting for the top spot of the podium and the championship. Five different drivers won during the 2021 season, with Cole Morgan (RPM / Tony Kart) the only to win twice. It was the two wins at the WinterNationals that set Morgan apart from the rest of the drivers, as he held on to claim the series championship. Jace Park (TKG / Kart Republic) and Nolan Allison (RPG / Kosmic) were consistent throughout the season to finish second and third in the standings. Allison was among the new winners on the season, including Caleb Shrader (RPG / Kosmic), Austin Garrison (RPG / Kosmic) and Thomas Annunziata (MDR / Kosmic). All but Garrison will be in the field at the SuperNationals.

The United States Pro Kart Series welcomed 116 different racers to their four events on the 2021 season, which was led by Senior rookie Connor Zilisch (Team Nitro Kart / Tony Kart). Zilisch won three times on the season to lock up his first USPKS Senior title of his career. He comes in with a very solid SuperNats resume, winning the 2017 Mini Swift main event, placing runner-up in KA100 Junior in 2018, before ending up sixth in 2019. Lemke, the 2020 series champ, was second on the year. 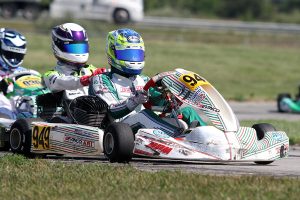 2021 Pro Tour champ Cole Morgan among the many contenders in this year’s field (Photo: EKN)

Massimino and Zilisch are not the only former SuperNationals winners in the field as Brent Crews returns to add to his two previous wins. Winning Mini Swift in 2018, Crews won the KA100 Junior division in 2019, and has already moved up to the Senior ranks. Crews (MPG / WPK) – a two-time IAME International Final winner and Rotax Grand Finals champion – will be running double duty on the week, also competing in the Pro Shifter division. In total, 25 drivers are doing both KA and X30.

In addition to previous winners, there are previous and current Pro Tour champions in the field. SuperNationals 24 marks the Senior debut for Carson Morgan (RPM / Tony Kart). Morgan was able to double up for a second straight year in the Junior ranks, both KA and X30 to bring his career Pro Tour title number to six, adding in the two Mini Swift titles from 2017 and 2018. Morgan has two top-10 finishes in the Mini ranks at the SuperNationals with only one year of Junior in 2019. 2019 KA100 Senior champ Austin Osborne (IRM / Tony Kart) returns to the SuperNationals, placing third in 2019 and eighth the previous year. 2016 Pro Tour X30 Junior champ Alex Bertagnoli (FMS / Merlin) and 2012 TaG Cadet title winner Hunter Kelly (SpeedSense / Redspeed) compete the former champs in the field. 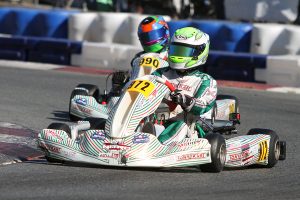 Four of the five podium finishers from 2019 are in the field, completed by Michael Michoff (RPG / Kosmic). The California driver finished fourth in his first start in the category. Other SuperNationals podium finishers from the past include Oliver Calvo (LEM / Redspeed) – placing fifth in 2016 in X30 Junior, Diego Contecha (Orsolon / Tony Kart) – finished second in Mini back in 2017, Maximilian Opalski (RPM / Tony Kart) – placing fifth last year in KA100 Junior, and Jamaican Alex Powell (Parolin USA) who finished third in Mini back in 2018. Powell is a Mercedes-AMG Petronas Junior driver who raced OKJ in Europe all season long. 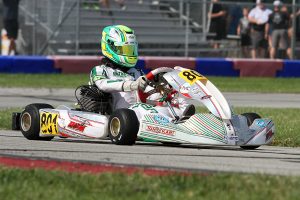 3 – Former SuperNationals winners in the field

6 – Pro Tour champions in the field

9 – Competitors from outside of the USA