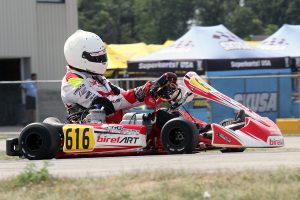 Shifterkart racing is the foundation of Superkarts! USA, and of course the SuperNationals. It was in 2000 that Master Shifter made its debut at the SuperNats with the G1 category, running until 2011. Stock Moto made its way into the SuperNats in 2006 with the S4 division, reserved for the Heavy drivers and then Master only later. That ran until 2019 when G1 returned with the IAME powerplant. Now, Master Shifter has opened up to both KZ and IAME SSE 175 powerplants, welcoming 17 drivers.

What is notable about this year’s field is the battle that has raged on over the last seven seasons. Jordon Musser (PSL / Birel ART) has the honor of the only driver with five SKUSA Pro Tour championships. His first came back in 2013 before going three-straight from 2016 to 2019. He returned to the Semi-Pro category for half of the SummerFestival before coming back to Master Shifter in 2021. He won three of the six main events for a fifth career title. One name that has been his lead rival is Ryan Kinnear (PGR / Ricciardo). Kinnear is the 2016 Pro Tour champ, who kept Musser from winning that year. Kinnear is also the only driver in the field to win at the SuperNationals in the Master Shifter category, something Musser has not been able to do. In fact, he has been on the podium the last four SuperNationals, as has Musser. Kinnear stole the show at the SummerNationals in August, winning both main events. Yet, this October, it was Musser who came through for a second ROK Vegas victory in the last four years. The other winner, Kinnear in 2019 and 2020. 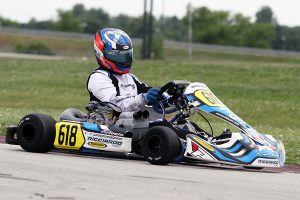 This rivalry, however, could become a trio, thanks to the addition of Joey Wimsett (DRT / DR Kart) to the category. The 2014 SKUSA Pro Tour champion and SuperNationals winner took home nearly $20,000 in Vegas that year and has remained one of the top shifterkart drivers in Vegas each year. Since 2012, Wimsett has finished in the top-10 seven times, with that one victory his only podium.

Scott ‘Skitchy’ Barnes (HMG / TB Kart) makes it four Pro Tour champions in the field as the Bermuda driver earned the crown in 2020. He finished vice-champion to Musser this year, earning one victory at the WinterNationals. It was Joe Ruch (Race Factory) who finished vice-champion to Barnes in 2020 and was among the quickest at the SummerNationals. If Ruch can stay out of trouble like he was at New Castle, he could contend for not only the podium but the victory on SuperSunday.

3 – Competitors from outside of the USA