Season Finale for Parolin in Adria 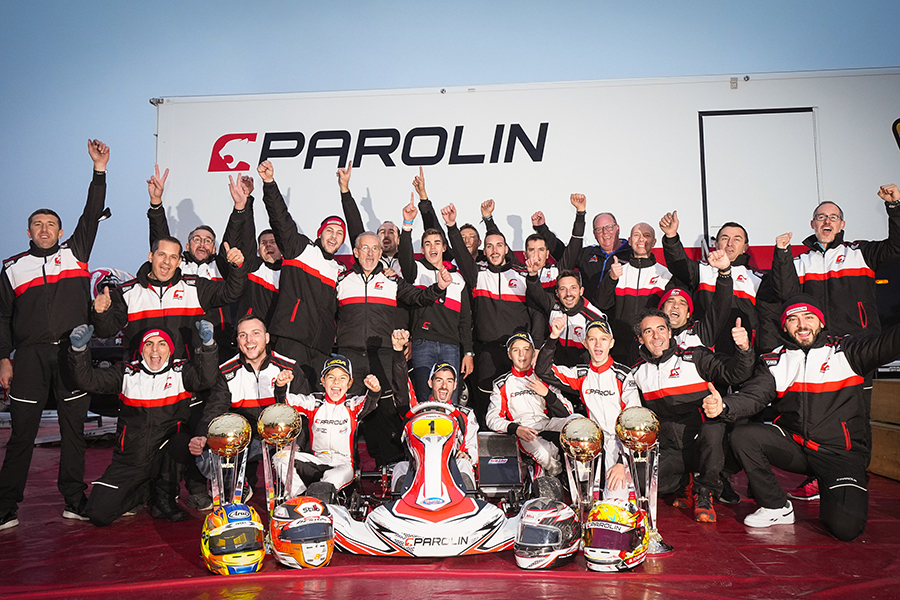 The last race of the season, the WSK Final Cup in Adria, was a great success for Parolin Motorsport. There was complete domination and victory for Celenta in KZ2 followed by Travisanutto in 4th position, a double podium for Orlov and Khavalkin in Junior, 2nd place for Costoya in Mini and 4th place for van Langendonck.

“The weekend was very satisfying”, declared Marco Parolin. “Our drivers showed a remarkable level of performance in all three categories and six of them were able to obtain the results they deserved despite the intensity of the races. It is very rewarding for the whole team to end the season on such a positive note. We have a solid base to start 2022 with confidence. The development work will not stop and we are already looking forward to next year with great potential. It will be an exciting challenge. Of course, the year-end break will be welcome for everyone and it was important to end on a positive note.”

The WSK Final Cup brought together 275 drivers from more than 40 different nations at Adria Karting Raceway. Parolin Racing Kart was ranked 2nd among the manufacturers with 46 chassis in competition, of which almost 25% of the field was Mini. With four Parolin karts in the top eight of the Mini Final, two in the top four in KZ2, two in the top three in OK-Junior, the competitiveness of the productions of the Bassano del Grappa brand is not in debate.

Francesco Celenta won everything in Adria from Timed Qualifying to the Final with a 2” lead that allowed him to win the 2021 WSK Final Cup, a very competitive event where he kept the lap record. Lorenzo Travisanutto also had an excellent run in the top three of the heats with a 4th place Final position.

Anatoly Khavalkin impressed in the OK-Junior class, dominating the race until the Prefinal. The Final race was more successful for Maksim Orlov, who started 22nd and finished 2nd ahead of his team-mate Khavalkin on the podium. René Lammers completed the success of Parolin by securing good heats, 7th position with the fastest lap in the Prefinal and an 8th place after a gain of five positions in the Final.

Enzo Deligny had the ability to make his mark after his 5th place in the heats, but the start of the Prefinal A marked the end of the meeting for him. Lauritz Sachse from Denmark was doing well in the heats in his first participation at this level.

No less than 126 drivers competed in Mini. Christian Costoya made up 10 places during the heats by finishing 4th and improved his score by finishing 2nd in the Final. Dries van Langendonck followed a similar progression to reach 4th in the Final. William Calleja, who qualified 5th, had three very difficult heats and did not manage to qualify for the Final, despite a 10 place improvement in the Prefinal. Oliver Kinmark also had difficulties in the heats and did not reach his goal, as did Angelo Blanco. Alessandro Truchot put in a remarkable performance, regaining no less than 33 positions from his distant Qualifying. Simas Baciuska remained handicapped by his 111th place in Qualifying.