Third different winner to be crowned on SuperSunday for category 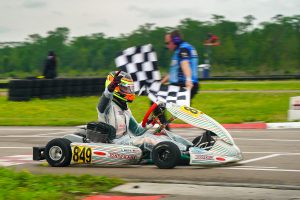 Noah Baker comes in as the top driver from the SKUSA Pro Tour in 2021 (Photo: On Track Promotions – otp.ca)

The KA100 Junior class was introduced at the SuperNationals in 2018, producing two amazing races on SuperSunday. The previous winners include Ferrari Driver Academy pilot James Wharton from Australia who will be racing Italian F4 in 2022, and 2019 victor Brent Crews – already moved to Senior level racing this season. This makes the 2021 field unique with no former SuperNationals winner in the field, including the lower levels, for the sold-out 46-driver field.

Three different drivers won in 2021 at the SKUSA Pro Tour, including series champion Carson Morgan three times in six rounds, who is moving up to the Senior level ranks at SuperNationals 24. Noah Baker (Supertune / Tony Kart) doubled up at the WinterNationals in the win column, however, ended up as vice-champion despite never returning to the podium. Austin Jurs (FMS / Redspeed) is the other winner on the season, taking his first SKUSA Pro Tour triumph at the SpringNationals. Jurs ended up P3 in the final standings, adding a Route 66 Sprint Series title to his 2021 CV. The Illinois driver finished on the podium at the SuperNationals in 2019, placing third in Mini. 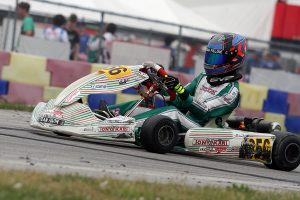 The United States Pro Kart Series had 82 different drivers compete in their KA100 Junior championship, won by Jeremy Fletcher (TF / Tony Kart) – the driver in the class with the most SuperNationals career starts at four. Fletcher won the opening two rounds and held on to the very end to claim the championship. He fought off Sebastian Wheldon (JC / Kosmic) and Chase Hand (RPG / Kosmic) in the final championship chase. Wheldon is set to make his first SuperNationals start. The son of late IndyCar driver Dan Wheldon last made a start at the 2010 edition of the SuperNationals. Wheldon had one victory in the six USPKS rounds and did not compete in the full SKUSA Pro Tour. Hand grabbed his first USPKS victory at New Castle, just missing on a SKUSA Pro Tour podium multiple times. He did kick off the season strong, winning both the Florida Winter Tour and SKUSA Winter Series titles in 100cc competition.

Momentum is always key when heading into the SuperNationals, and Jesus Vasquez Jr. (Nash / EOS) has that on his side. The California driver won four-straight to secure the California ProKart Challenge title and won the recent ROK Vegas event. That race was won on-track by Ayden Ingratta, who was dropped down to third after a penalty. Ingratta (SCR / Redspeed) went on to win the Junior ROK main event later in the day last month. The Canadian is the vice-champion in the USPKS X30 Junior division, and among the 14 drivers going double duty at SuperNationals by also racing in X30 Junior. That also includes Fletcher, Hand, Wheldon, Baker, Parker DeLong (RPM / Tony Kart), and G3 Argyros (SCR / Redspeed). 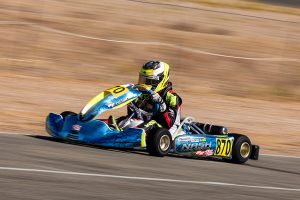 This year’s field is full of KA100 Junior rookies at the SuperNationals, with only one driver who competed in the class in 2019. Danny Dyszelski (Magik Kart USA) finished 34th in his rookie run two years ago, coming off his first victory at the USPKS program at the series finale. SuperNats rookies to watch include Alexander Gonzalez (Nash / EOS), Cole Kleck (Arcane / Tony Kart), Texas Sprint Racing Series champion Helio Meza (IRM / Tony Kart), and James Overbeck (Team Nitro Kart / Tony Kart) just to name a few.

1 – Drivers who raced in class at SuperNationals

6 – Competitors from outside of the USA