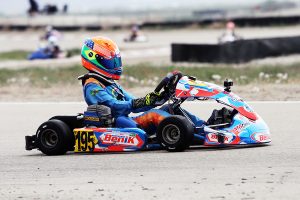 Enzo Vidmontiene has put in a solid 2021 season with both SKUSA and USPKS championships (Photo: EKN)

Like the Micro Swift category, the Mini Swift division will welcome a first-time winner at the SuperNationals on SuperSunday. The 66-driver field is full of young talent, many we have seen over the course of the 2021 season compete at the front to provide a full slate of contenders for this year’s SuperNationals. Less than half of the field has competed at the SuperNats in the past, making this a rookie filled roster that is one-third international drivers.

One name that has stood out throughout the season in Enzo Vidmontiene (Benik). Three wins in the first four rounds of the SKUSA Pro Tour helped the Florida driver secure enough points on the season to claim his first series championship. Enzo also secured the title at the United States Pro Kart Series, and vice-champion of the Florida Winter Tour. Vidmontiene is among the more experienced Mini drivers, having competed in Vegas twice in the Micro division, finishing 8th in 2019.

The only driver to race at the SuperNationals in Mini Swift is Oscar Iliffe (IRM / Tony Kart). Iliffe finished 21st in 2019 and comes in with momentum and lots of experience, racing in Cadet for the final time. Oscar was runner-up both days at the SummerNationals and claimed the Texas Sprint Racing Series championship. His brother Jack Iliffe (IRM / Parolin) is the 2020 SKUSA Pro Tour Micro Swift champion and finished as the top Mini rookie with the vice-champion position in 2021 SKUSA Pro Tour. They both had success at ROK Vegas, with Jack taking the victory and Oscar placing third. 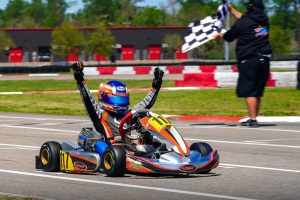 Another driver coming into the Vegas with odds on his side is Diego Ardiles (Supertune / Tony Kart). Ardiles won both main events at the USPKS finale at GoPro Motorplex, winning three in total on the season. Kai Johnson (SCR / Energy) rounds out the race winners from the USPKS program in 2021. Diego Guiot (Parolin USA) is the Texas Sprint Racing Series vice-champion behind Iliffe, scoring victory at the series finale in Amarillo. Each should be considered a contender in Vegas.

Of the international drivers, one stands out from Canada. Jensen Burnett is the 2021 ROK Cup Superfinal Mini ROK winner, scoring victory in October in Italy. Three pairs of brothers are competing in the Mini category, including one from Romania. David Cosma Cristofor and Bogdan Cosma Cristofor are under the PSL Karting / Birel ART tent. 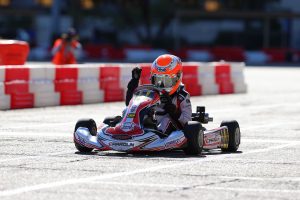 24 – Competitors from outside of the USA