Youngest drivers of the event set to crown new winner 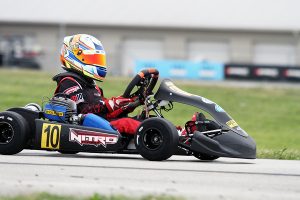 A fifth name will be added to the history books on SuperSunday when the final checkered flag waves for the Micro Swift main event. The sold out 48-driver field features no former winner, with all but three drivers making their SuperNationals debut. In the past, the Micro drivers have kept their heads on over the course of the event with no major issues. We hope to see the same for the international field, including six different countries with 16 drivers from outside the USA.

Of the three drivers returning, one includes the 2021 SKUSA Pro Tour champion Gianmatteo Rousseau (Nitro Kart). Rousseau came away with the series championship based off the two wins from the WinterNationals. He went podium-less the remainder of the season. Third in the standings for 2021 was Tristan Murphy (Nitro Kart). Murphy picked up his first Pro Tour victory at the SpringNationals, landing on the podium two more times and also won the California ProKart Challenge championship. 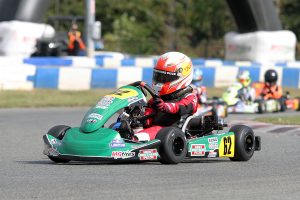 Over the course of the six rounds, five different drivers grabbed their first SKUSA Pro Tour victory. Phaethon Saradpon (Kart Republic) won at the SpringNationals as well, finishing the season fourth in points. United States Pro Kart Series champion Keelan Harvick (Nitro Kart) won the series finale at New Castle, finishing fifth in the final standings competing in just four rounds. Also racing in four rounds was Lucas Palacio (CompKart), winning at the SummerNationals and standing on the podium once at the SpringNats.

Alessandro Truchot (Parolin) is the third other driver with SuperNationals experience, and is counting on the trips to Europe to race can help for Vegas. The Tovo brothers of Ethan (Nitro Kart) and Jackson (Nitro Kart) help add to the east coast contenders traveling west, with Ethan scoring a Route 66 Sprint Series championship. Several drivers from the west coast should be in contention throughout the weekend, including Ashton Woon (Nitro Kart), Challenge of the Americas champion Jaxon Porter (Nitro Kart), Troy Ferguson (Benik), Mateo Calderon (Aluminos) and Rhys Bowman (CompKart). Oregon driver Jackson Gibson (Kosmic) has been showing well on the east coast toward the second half of the season and could be among those fighting for a podium position on SuperSunday. 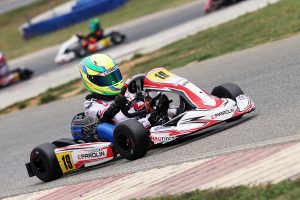 Alessandro Truchot is among those looking for a breakout victory on SuperSunday (Photo: EKN)

3 – Number of drivers with SuperNationals experience

16 – Drivers from outside of the USA