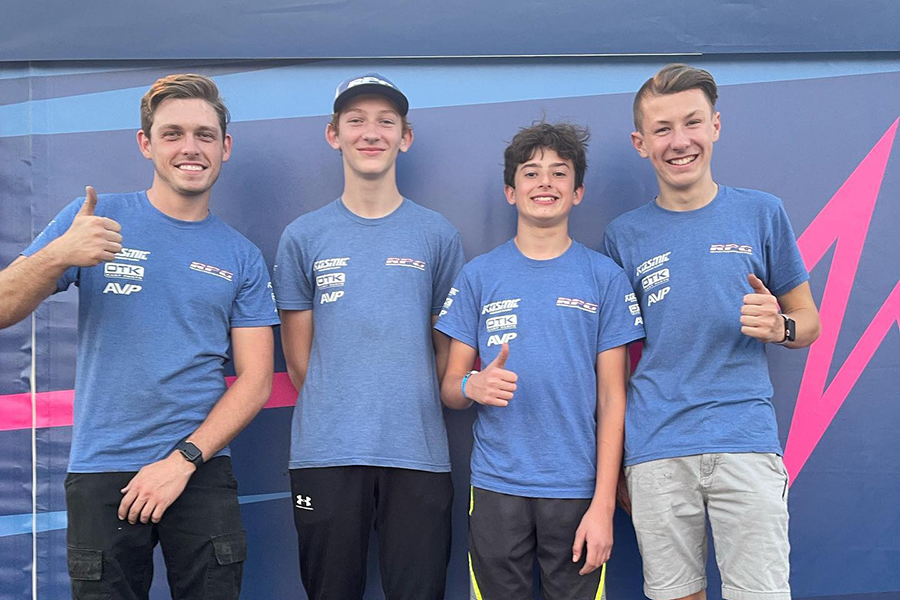 The 2021 season is nearing the end with the Rolison Performance Group completing the first of two events to close out the year. The first was over November 3-7 with the ROK Cup USA hosting the ROK Vegas event outside of Planet Hollywood Las Vegas. A new location and circuit greeted the over 20 drivers under the RPG tent aboard OTK products in nine categories. The winning ways continued for Rolison Performance Group on the season with victory, four podiums and top-10 finishes at ROK Vegas.

“It was an exciting week in Las Vegas for the entire crew under the Rolison Performance Group tent,” stated Rolison Performance Group owner Mike Rolison. “Competing at a temporary circuit requires the whole team to work together to be successful, and we executed that. I’d like to thank everyone for the effort put in, and thank you to Speed Lab, Comet Racing Engines, AM Engines and SwedeTech for the assistance with the engine programs over the five days of competition. The work put in by the drivers, mechanics and driver coaches throughout the year certainly showed with the results we were able to achieve.”

Fresh off winning the Mazda Motorsports Spec MX-5 Shootout, Nate Cicero was able to score victory in the Senior ROK category. Cicero was top-five through qualifying and the four heat races, starting the Final in fifth. He was into the third spot and eventually moved to second, studying the leader for multiple laps. Cicero made his move on the last lap, last corner to come through for the victory in his first temporary circuit event. USPKS champion Ryan Norberg was top-three throughout the event and joined Cicero on the podium in third.

Two drivers were able to land on the podium in the Junior ROK division. Chase Hand and new RPG driver Caleb Gafrarar were in the hunt all event long. Hand set fast time in qualifying, going on to win two of the four heat races to secure the pole position for the main event. Gafrarar was top five, except for one heat to line up sixth on the grid for the Final. After leading the opening two laps, Hand fell to second where he would stay until the checkered flag. For Gafrarar, it was a race long battle for the third position, moving from fifth to third on the final circuit to secure a position on the podium, giving RPG a 2-3 finish.

It was nearly two podium finishes for Hand at ROK Vegas as he ran double duty, also competing in the VLR Junior class. Hand was top-three over qualifying and the four heat races to roll out from the P3 position in the Final. He was up into the lead by lap eight and showed the way until lap 19. He was shuffled back to fourth, where Hand would cross the line. Graham Trammell improved throughout the event, starting the main event in 21st and advancing to 12th. Also climbing up in the Final included Taila Akigami, who rolled off in 23rd and ended up 19th. Emma Scarbrough qualified 17th and had a best finish of 10th in the heat races. She started 26th and drove to 21st in the Final. Gavin Wardle made his first major start in karting, joining RPG and made improvements throughout the weekend, but was unable to take the checkered flag in the Final.

Another near podium in the Master ROK division with veteran Billy Cleavelin. It was the two-time SKUSA SuperNationals winner that won twice in the heat races, helping to earn the pole position for the Final. Cleavelin was shuffled back to third, losing the podium position on the final circuit to end up fourth. Danny Robertson was on the verge of breaking into the top-10 all event, starting the Final in 12th. Up to ninth on the opening circuit, Robertson was able to advance up to the eighth position to put two RPG drivers into the top-10. Robert Maier had the pace to contend up front, just not the racing luck. After qualifying seventh, it was up and down in the heat races to end up 15th on the grid for the Final. He was shuffled to the tail end of the field at the start but fought forward to end up 14th at the checkered flag.

Maier was pulling double duty at ROK Vegas, as he represented RPG in the VLR Master division. Competing in the class for the first time, Maier adjusted well to the two different engine packages. Early on, he was in the top-10 but eventually ended up P13 for the start of the Final. Another rough start put him at the tail end but fought back with laps comparable to the leaders to finish back where he started in 13th.

A top-five finish was recorded in the ROK Shifter Master by Mike Beeny. The tuner for Hannah Greenemeier throughout the last few seasons, Beeny returned behind the wheel for his ‘one-off’ appearance. He improved from a P9 qualifying effort to sit fourth on the grid for the Final. He jumped up to third early but went back to fourth where he would run the remainder of the race. Victor Jimenez joined him and was in the top-10 throughout qualifying and the heat races. He started 10th in the main event and ran as high as seventh before slipping back to 11th.

Four other shifterkart drivers ran under the RPG tent for ROK Vegas, led by Jace Denmark-Gessel. Improving three spots, Jace finished 13th to lead the way. Hannah Greenemeier made her first start in a shifterkart in 2021, advancing 14 positions to end up 17th. Austin Garrison was battling within the top-five all event, suffering an issue in the closing laps of the Final to record a DNF. Richard Warmbir improved throughout the event, however, also recorded a DNF in the main event.

Caleb Shrader led the way for RPG in the VLR Senior division. Shrader recorded a 10th-place finish, with fellow RPG driver Zak Meyer in 11th. It was the first national race weekend in Senior competition for Meyer, who qualified well and managed to climb 12 spots in the Final. Grace Hemmerde joined them but was unable to finish the main event. Lillian Scarbrough nearly finished in the top-10 in her ROK Vegas Micro ROK debut. Scarbrough started the Final in ninth, and finished 12th to complete her best weekend on the national level in 2021

The Rolison Performance Group operation is closing out the season with the SKUSA SuperNationals 24 on December 1-5 outside the Las Vegas Motor Speedway.