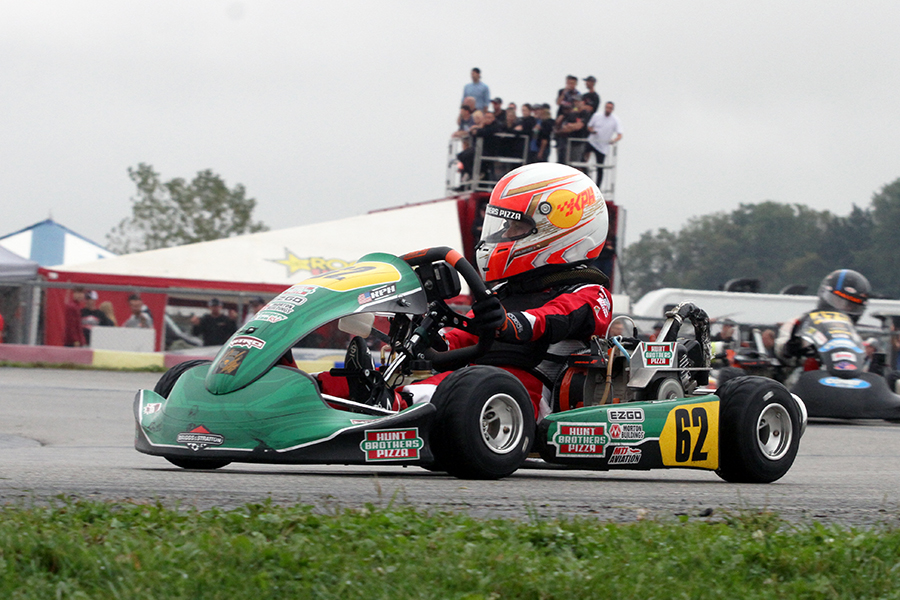 It has been a very successful season for Nitro Kart driver Keelan Harvick. The spotlight has been on Keelan each race in which he competes, as the son of NASCAR’s Kevin Harvick. The now 10-year-old has taken that pressure in stride, performing at his best every session, always determined to put the race in his own hands. 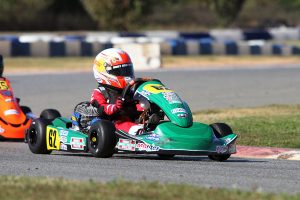 Harvick was able to double up at the USPKS Carolina Grand Prix in Micro Swift and clinch the series championship (Photo: EKN)

The season began with his first championship on the year, clinching the Superkarts! USA Winter Series on the strength of three victories in four rounds. Then in March, Harvick defended his home turf with victory at the inaugural Cup Karts North America Spring Nationals held at Charlotte Motor Speedway in North Carolina. Keelan took part in two of three SKUSA Pro Tour, including the WinterNationals and SummerNationals. In total, he stood on the podium twice, highlighted by a victory in the final round. Despite missing one event, Harvick still finished fifth in the final point standings.

The month of October took Harvick to two events. The first was the Cup Karts North America Grand Nationals, making his debut in Briggs 206 Sportsman at the event. The weekend began strong in qualifying as Harvick cleared the 55-driver field by three tenths, posting a lap of 1:18.064. The class was broken up into two groups for the heat races, with Keelan taking the win in both of his races. That put him on the pole position for the main event. While he was challenged throughout the entire 15 laps, Harvick fought off a strong last lap battle with Phaethon Saradpon to reach the checkered flag first by 93 thousandths.

Two weeks later, it was a home race for Harvick at the GoPro Motorplex in Mooresville, North Carolina as the United States Pro Kart Series closed out the 2021 program with the Carolina Grand Prix. Harvick entered the weekend leading the Micro Swift championship and made sure there was no drama in the title chase with a sweep of Saturday’s action. Keelan led from qualifying to the Final, pacing all 20 laps of the Final with fast lap of the race for his third victory on the season. 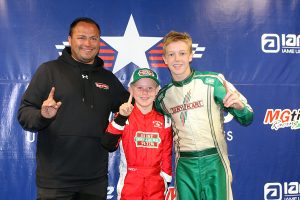 The following day began the same way with Harvick on top on Sunday for the final round of the series. Qualifying wrapped with Keelan posting the fast time, although this time the field had closed the gap. He was shuffled down to fourth on the opening lap of the Prefinal but fought back to lead 10 of the 14 laps. A two-position penalty for avoidable contact classified him third, however, and placed him on the inside of row two for the Final. The main event was another battle, this time with Harvick leading 16 of the 20 laps, including the most important one, the last. Leading the final four circuits, Harvick held off a late charge by Ethan Tovo for the victory. When the final standings were tabulated, Harvick secure the USPKS Micro Swift by 279 points.

This past weekend, Keelan made his ROK Cup USA debut at the ROK Vegas event, competing outside the Planet Hollywood in Las Vegas in the Micro ROK. After qualifying third, Harvick recorded finishes of third, first, fourth and 26th to end up sixth on the Final grid. He advanced up to fourth on the opening circuit, and up to the lead by lap eight. Keelan battled back and forth for the top spot, securing the position at the white flag. Harvick held on through the final lap to reach the checkered flag first for the victory.

Keelan is set to compete at his first SKUSA SuperNationals, taking part in the 24th edition of the race in Las Vegas during the first week of December. Next season, Harvick will move up to the Mini division at the SKUSA, USPKS, and ROK Cup USA events along with select Briggs 206 Cadet races while getting started in Legend car racing. 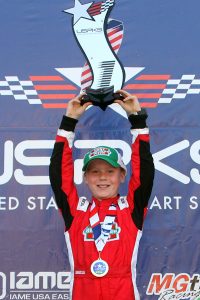 Chassis: Nitro Kart
Engine/Engine Builder: Woljer IAME / GT Briggs / Allison ROK
Sponsors: Hunt Bothers Pizza, EZ-GO, Morton Buildings, MTJAviation, Campers INN
Series You Compete In: GoPro Motorplex Challenge, United States Pro Kart Series, Superkarts! USA Pro Tour, ROK Cup USA, Route 66 Sprint Series, Texas Sprint Racing Series, Cup Karts North America
Years Karting: 2
How did you get started in karting? Started karting for fun with my dad in October of 2018. When COVID hit during 2020, we got tired of iRacing and decided to race my first club race at GoPro Motorplex and from there we have raced ever since!
What has been the high point in your racing career? ROK Vegas Win
What are your goals in racing? Race F1
In a few words, how would you describe your driving style? Unique because I make risky moves sometimes.
Funniest moment at the race track? When I spun out for qualifying coming out of the pits at GoPro.